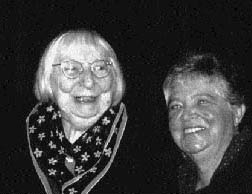 Iria Vieira had just arrived in Toronto when she walked through the doors of St. Christopher House in Kensington Market more than 30 years ago. A recent emigrant from the Azores, she went to the neighbourhood house looking for work and information. Instead she found a life-long vocation.

“I walked in and basically I started working right away,” Iria said, remembering the throng of fellow emigrants who were at St. Chris’ looking for answers in their own language. “There was such a big need for translation and I had both languages, so I helped out.”

From 1965 on, Iria Vieira dedicated her personal and professional life to working with Toronto’s newcomers, particularly those in the Portuguese community.

Like Jane Jacobs, Iria observed what was needed in the community and took matters into her own hands. In between day jobs in restaurants and hospitals, she accompanied people from St. Chris’ to doctor’s appointments or government offices – acting as an advocate, translator and a friend.

Three years after Iria’s arrival, the Toronto Board of Education’s Social Work Department hired her as an interpreter/ counsellor. “I worked with parents and children, linking them with doctors, teachers, psychologists ‘It was a natural extension of my work at St. Chris’.”

Meanwhile Iria was also volunteering on a project to assess the communication needs of the Greek, Portuguese, Italian and Chinese communities. The study resulted in the creation of four translation services, including The Portuguese Free Interpreters’ Service — one of the first of its kind in the city. Iria was one of its founding members.

St. Chris’ was a catalyst for the community it serves and was always at the centre of Iria’s work, even after she moved out of the neighbourhood in 1975. In 1989, Iria got involved in a project to reach out to widows in the Portuguese community.

She inspired them to get involved in their community again and soon the project was attracting women from a wide range of backgrounds. This was the beginning of the Portuguese Women 55+ Support Group of Ontario (PW55+), the first independent group of Portuguese-speaking women in the province. Co-founded by Iria and women from Portuguese Social Services, PW55+ lobbies on behalf of all seniors and supports senior women in their daily lives. In 1992, Iria and PW55+ began working on St. Chris’ Elder Abuse Project, a public education strategy that includes skits as one of its educational tools.

When Iria retired from the Toronto School Board in 1996, after 30 years of service, she continued her volunteer work full-time as a Board member at St. Chris’ and the President of PW55+.