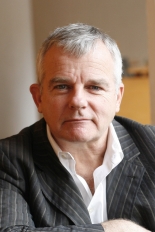 John van Nostrand is an architect and urban planner who is being recognized for his innovative thinking around the issues of homelessness, home affordability and the transformation of underutilized urban spaces, and his passion for the historical processes by which our city has been shaped.

John is a founding partner in the firm, architectsAlliance [aA] and its affiliate practice, planningAlliance [pA], Toronto-based firms. Educated at the University of Toronto, he originally chose architecture as a way of balancing his interests in both art and science. He believes that architecture is more than simply designing buildings. The integration and collaboration between planning, engineering and design are all fundamental components of imagining and building healthy communities.

Since its founding in 1977, pA has been responsible for the planning, design and implementation of a wide variety of urban and rural development projects both at home and abroad. The planning, design and construction management of several major urban communities in developing countries has provided John with a rich cross-fertilization of ideas for cost-effective housing.

In many urban cities around the world people build their own houses and additionally, houses are built in incremental phases as household circumstances change. John points out that until the 1950s, 40 per cent of Toronto housing was owner-built, borrowing from the tradition of urban pioneering. “Currently almost two-thirds of our population is left out of the housing market which undermines our economy”, says John. The private housing market in Toronto now caters predominantly to upper income households. In response to this, he has designed a prototype of a portable house, the ‘Pro-Home’, which can be built, in its smallest stage, as a one-bedroom dwelling, and then expanded incrementally up to a five bedroom house. The smallest unit could potentially be financed by a social assistance recipient. As well as this proposal, John has directed a number of building projects of affordable housing, a current project being Evangel Hall, a single-room-occupany residence for homeless men with a drop-in centre and related social facilities for the Presbyterian Church of Canada.

Since his undergraduate days John has thought about the ways in which underutilized and vacant urban areas can be integrated into community life. His architectural thesis looked at the large expanse of vacant land lying under the 401 and 427 interchange in Etobicoke. “We have tended to view our urban infrastructure solely from an engineering perspective rather than a design opportunity”. In a radical re-thinking of the Gardiner Expressway, John, in conjunction with Calvin Brook, have proposed to encourage the reuse of vacant space underneath the expressway. They envision a plan that would fill the space with outdoor markets, light industry, clubs, restaurants and artists’ lofts, the hallmarks of vibrant urban communities. The transformation would follow in the footsteps of other international cities who have adapted spaces in and around public infrastructure. The Gardiner Expressway feasibility study is currently being reviewed by the Toronto Waterfront Redevelopment Corporation.

In addition to his architectural and planning work, John has written and lectured extensively on urban development issues and in particular, housing development. His current projects within Toronto also include the Living City Centre at the former Kortright Conservation Centre and a Green School Master Plan for Upper Canada College’s Deer Park and Norval Campus based on sustainable development principles.