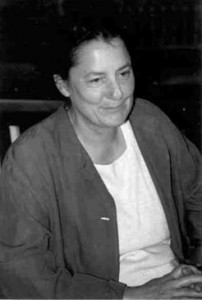 Jutta Mason has a profound belief in public space, in ‘the commons’: of its value in making neighbourhoods work. She is one of two recipients of the 2001 Jane Jacobs Prizes (the other is David Walsh).

Born in Germany in 1947, Jutta emigrated to Canada as a child in 1956. She originally trained as a nurse. Her interests – both professionally and as a volunteer – have always revolved around communities, and the way in which the people who inhabit them find ways to care for each other. In the seventies she arrived in Toronto, by way of Peterborough, Hailebury and Vancouver.

While home schooling her three children, Jutta read a book by Alison Stallibrass about a community centre in England between the two world wars, called the Peckham Centre. This book galvanized her into approaching her local community centre with some friends to set up an “indoor park” one day a week. It quickly grew into a once-a-week “scene” involving 60 to 100 people, food, music, and lots of fort building by the kids. It’s still going. In the meantime she moved a block away from Dufferin Grove Park, to a neighbourhood with three high schools nearby. She attended a few neighbourhood meetings and heard people suggesting that the teenagers who hung out on the streets and in the park, swearing and making various bits of trouble, ought to be arrested and jailed. She knew few people in her new neighbourhood, but had the impression lots of the people who had lived there longer didn’t know each other either. She had a suspicion that people living side by side as strangers would be more likely to see confinement as the only form of social control.

So she helped to create the sense of community that resonates at Dufferin Grove Park. She formed Friends of Dufferin Grove Park which now boasts a community bread oven, a skating rink, clubhouse and hosts a wide range of community activities, both formally organized and spontaneous. Jutta claims one of her biggest achievements has been hunting up old forgotten locker-room benches in Parks storage rooms and getting them put out all around the park. Every day the benches are in a different positions, depending on whether they were most recently used for courting or snoozing or hanging up the laundry for the homeless people’s washday. Or for rapping at midnight beside the basketball court. Or as spectator benches for a theater piece. Or as a nursing/changing bench beside the bake-oven on the family pizza days. Or piled on top of each other as a bold and innocent statement about the power of teenagers to disarrange the world. Fun!

Over the years, Dufferin Grove Park has been the subject of much attention from communities across North America wishing to learn from its successes. But some of what has been written and said about the experiments at the park have irritated those who were actually there. So last fall, a group led by Jutta decided it would pre-empt the anthropologists who wanted “to use us as their natives” by establishing their own research centre, the Centre for Local Research into Public Space. “Establishing the centre was pretty straightforward, since we already had the park clubhouse and the coloured paper and the computer printer to make the signs for the door” said Jutta. Three CELOS publications are on their way: “Cooking with fire in public space,” “What is a park?,” and “Whose conflict is it anyway?”.