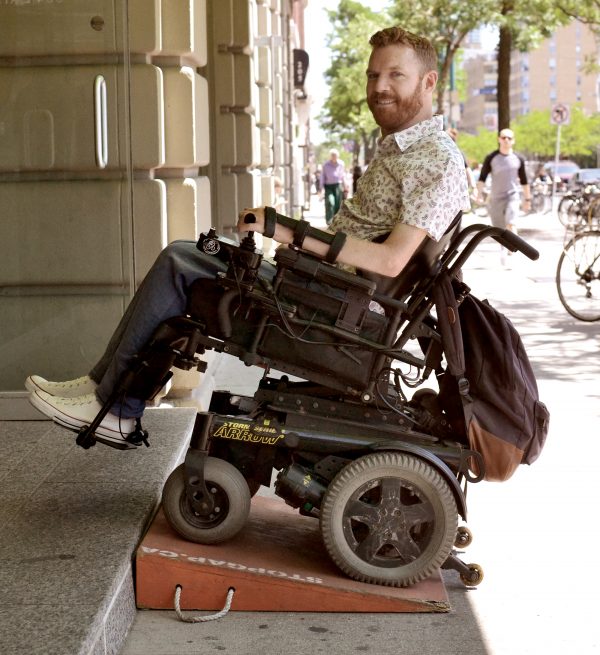 Luke Anderson is a recipient of the 2016 Jane Jacobs Prize

Luke Anderson leads me through a cramped coffee shop up to an almost-as-cramped shared office space in downtown Toronto, stopping to talk to nearly everyone we pass on our way up to the fourth floor. I’m out of place; he’s navigating with ease. Even if, like Anderson, you need to use a wheelchair, accessibility is less about what you can do than it is about the environment around you. Or, as he puts it: it’s not people who are disabled, it’s that environments can be disabling.

Anderson is one of this year’s Jane Jacobs Prize winners for his dedication to both the issue of accessibility and a larger vision of creating a more diverse and engaging urban environment in Toronto. In 2011, Anderson founded the StopGap Foundation. It provides temporary, brightly-coloured ramps to business owners in Toronto and across Canada that help them overcome what he often calls the “one-step problem” — a single step outside a business that can make the entire building inaccessible to someone with a mobility aid. The wooden ramps, painted to attract attention and create awareness, allow both those with mobility aids and those who just need something a bit easier than a step — including the elderly, parents with strollers, and couriers with heavy trolleys — to access a building more easily.

Accessibility is something that has been at the forefront of Anderson’s life since 2002, when an accident in the natural environment, ironically, made the built environment so much more difficult for him. After graduating from the University of Waterloo and moving to the interior of British Columbia — “the best place in the world to mountain bike,” he says — Anderson and a friend were biking on a trail that included a 25-foot gap. His friend Johnny went first, clearing the gap, while Anderson manned the camera. When it came time for Anderson to complete the jump, though, things went differently.

“In a split second, my life changed,” says Anderson. He crashed, going over the handlebars and breaking two vertebrae in his back. “In that moment, and moments soon after, I was introduced to this new world that’s really not well-suited for someone who uses a chair.” Suddenly, the guy who identified himself as an athlete, ran long-distance track, played competitive lacrosse, and was in love with mountain biking, lost the use of his legs.

Immediately, Anderson had to face daunting new challenges. “It was a long process to understand what this all meant,” he says. Since his accident, those challenges have surfaced everywhere: he lived in an apartment building without automatic doors, and was forced to wait around until someone came in or out to get into his own building; he worked at an engineering firm where he needed his co-workers to deploy a heavy, awkward metal ramp every time he wanted to go in or out of the building; many of his favourite restaurants and venues were no longer accessible to him. His frustration boiled over.

“It reached a tipping point where I was just fed up,” he says. The daily battle to get in and out of his workplace was one thing, but he was also frustrated that things weren’t getting any better for people using mobility aids. “I was noticing that new buildings were being constructed with steps [only],” he says.

StopGap started with 13 ramps in Toronto’s Junction neighbourhood, built by volunteers out of donated building materials, and brightly painted to stand out on the street. By drawing attention through the use of colour, the ramps were meant to raise awareness of the issue of accessibility and the one-step problem. Immediately, the project took off: “It created so much buzz. The businesses loved them, the residents responded really well to them,” he says. “It really achieved our goal of getting the conversation started and putting accessibility on people’s radar.”

Those 13 ramps quickly turned into hundreds. In Toronto, StopGap now builds and sells custom ramps — which cost between $150 and $350 — as the primary revenue stream that sustains the project. People across the country started requesting ramps — so many, in fact, that StopGap released the design plans for the ramps online, so anyone could build one. He began getting requests from across the globe. “We’ve had interest in Russia, Italy, the Philippines — we’ve talked to people in France,” says Anderson. “All of these places face the exact same problems that we do here.” He even has his sights set on some of Canada’s best-known activists: “I get really excited at the thought of doing a tour along the lines of what Rick Hansen or Terry Fox did,” he says. “I think that’d be a lot of fun.”

A large part of Anderson’s work is taken up by outreach: he gives talks on issues of accessibility and works with businesses and municipalities to help them understand and think about accessibility and public space. “What we’re trying to do is just change the way people see things in their community,” he says. “We all have different abilities, and all have different ways of living our lives. We’re all unique.” Along the way, Anderson gets others — including an army of volunteers — involved. His friend Silvia Guido says that it was Anderson who convinced her to get involved in advocating for better accessibility in Toronto. She now runs AccessTO.ca, a blog that highlights businesses that have made accessibility a priority.

His infectious personality is one of his charms, says Guido. “Businesses are attracted to him. He’s just an overall amazing guy.”

Last February, Anderson quit his engineering job and began running the StopGap Foundation full-time after being accepted into the Centre for Social Innovation’s Agents of Change, a program that supports businesses, charities, and non-profits dedicated to creating positive social change. “We knew of him before the program started, and had specifically tapped him on the shoulder to encourage him to apply,” says Adil Dhalla, the Centre for Social Innovation’s director of culture. “He’s in some ways a model agent,” he adds. “Luke is doing something that applies to not just Toronto, but every community around the world.”

The one thing Anderson doesn’t do is look back and feel sorry for himself. Does he miss his old life? Absolutely. “I’m not going to lie and say it’s all glitter and roses. It’s tough. It’s not an easy way to live — I need a lot of help, and I constantly feel like I have to be my own advocate,” he says. “But every morning I wake up and decide I’m going to take it as it is and enjoy the things I can do — because there’s a lot of them.” That may be the most infectious and inspiring thing about him: despite the challenges of constant wheelchair use, he actually seems, in a way, liberated by it.

Anderson tells me something about horses: without blinders on, a racehorse, with eyes on the sides of its head, can see in almost all directions. Fourteen years of using a wheelchair has removed those blinders for Anderson: “I get to enjoy this new lens; that maybe puts my eyes on the sides of my head and lets me see the things I didn’t see before,” he says.

Before his accident, accessibility “wasn’t even on my radar,” he says. “I hadn’t given it one minute of thought. My mind, my energy, my attention was on my bike, or my ski boots, or whatever.” Now, it’s his passion. “I feel like I’ve been given a real opportunity to shed light on a big issue. The work that I’m doing now is going so much further.”

For Anderson, the thrill of seeing a business owner respond well to StopGap, or watching someone with a mobility aid or a parent with a stroller using a ramp, trumps the thrill of mountain biking, every time. 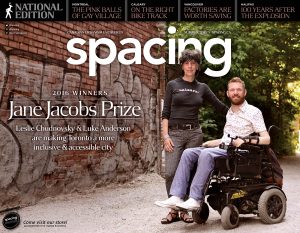 You can find this article in the print edition of Spacing (summer 2016) on newsstands starting in August.

The summer 2016 issue is Spacing’s annual national edition where we explore the unique forms of urbanism that have taken root across Canada.