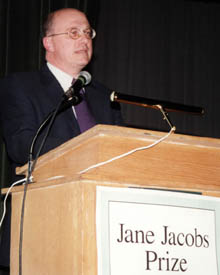 Mel Greif is an immigrant to Canada who chose Toronto. A refugee, Mel left his home of Czechoslovakia after World War II, and as a result is deeply sympathetic to the issues of building love for a new country, respect for diversity and accommodating newcomers during the difficult times associated with migration.

He is the President of the Czechoslovak (Toronto) Credit Union, which since the mid 1960s has enabled hundreds of newcomers from the old Czechoslovakia to make their first and last months rent, their first cars and their first furniture as well buy tools with which to start new businesses in Canada.

A high school history teacher for over thirty years, Greif is a renowned for his inspirational lectures and innovative teaching style, having experimented with approaches in the conveying his abiding interest in the story of Canada. His creativity, specific knowledge of and interest in urban, aesthetic and human-interest opportunities have been coupled with boundless energy and enthusiasm. Mel Greif has a special interest in Canadian urban historical geography and the nature and shape of cities and their architecture. Currently, Greif has partnered his high school Humberside Collegiate with the West Toronto and Junction Historical Society in completing a housing and building inventory. History students are learning about their community and about the techniques of primary research. Additionally, because of his long tenure at Humberside Collegiate, he has been able to use the school, a historic institution in its own right and a fine example of the Collegiate Gothic style with Italianate flourishes, as a laboratory in which to give students opportunities to take possession of their heritage.

During the Humberside Collegiate Institute Centennial celebrations, Mel Greif made sure that hundreds of students were involved, over a period spanning five years, in preparing for the anniversary. A massive set of Canadian history-based stained-glass windows was installed. A well-known Canadian glass artist, Robert Jekyll, used research contributed by students in Mel’s grade ten Enriched History classes. He then used these themes in composing six massive windows. All of this activity took place under the enthusiastic direction of Mel Greif.

Furthermore, Humberside and its students have a long tradition, stretching back to 1926, of sponsoring Canadian artists. Arthur Lismer was commissioned to paint what is thought to be the largest Canadian mural – The Humberside Lismer Mural. This famous painting was dismantled, damaged and partially lost during school reconstruction. Mel raised over $100,000.00 from alumni and government and cultural sources and arranged for the repatriation and de-accessioning of the missing pieces. He hired conservators from Queen’s University. After seven years of creative and hard work, the glorious mural once again hangs in its full majesty in the school auditorium, renamed Lismer Hall. The story of Canadian values, exploration and settlement is continually re-told to his students as they take part in assembly exercises under the colourful Lismer creation. Without the long-term initiative, driving force, continual activity and successful fundraising abilities of Mel Greif, this mural would have remained “lost.” This project is now in its final stage with the last missing piece having been located.

An active community member, Greif has helped the Annex Ratepayers Association as a board member with responsibility for zoning and planning, and as a member of Grassroots Albany, where he has been active in the planting of trees, shrubs and other plants. Currently Greif and others are bringing back amphibians to this special corner of the Annex as an experiment in rebuilding the environment.