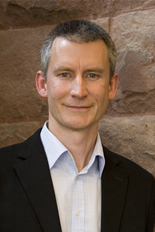 Nick Saul recently celebrated his tenth year as Executive Director of The Stop Community Food Centre, a neighbourhood-based agency operating in the city’s west end.  From its beginnings as a food bank established by St. Stephen’s-in-the-Fields Church, The Stop has now expanded to become a community hub where growing healthy food, cooking and eating are the avenue for delivering a huge range of services to the disadvantaged.  “It’s been a long march for ten years to create a food revolution”, says Nick.

The Stop is also involved in the ambitious Wychwood Green Barn project near Christie and St. Clair, the conversion of an old Toronto Transit Commission lot and streetcar barns.  When completed this fall, the Stop’s barn will contain a greenhouse, sheltered garden, community bake oven, café and classroom.  “Food is a great way of community organizing.  And the food revolution includes everyone”, says Nick who has envisioned a much larger mandate: ensuring that all families have access to healthy organic food; the knowledge to garden, cook and plan a healthy diet and at the same time, building civic engagement and advocacy around food security issues.

Nick’s roots are strongly anchored in an activist background.  His early years were spent in Dar Es Salaam where his father, a political scientist, was teaching at the University of Tanzania and active in the country’s liberation struggles.  After returning to Canada, the family spent another year in Africa, where Nick at the age of 15, attended school in Mozambique struggling in Portuguese.  It was a transformative year.  “I had taken everything for granted; in Canada you turn on the tap and the water comes.  I learned that not everyone has access to these resources”.  Nick’s family chore was to stand in rationing line-ups for milk and bread for the evening dinner table.

His final high school years were spent at Jarvis Community Collegiate in Toronto where he was a self-described “basketball jock”.  In his final year at the University of Toronto he became involved in politics and in the aftermath of the 1990 election which saw the NDP into power, he had a moment of “dumb luck” and was literally tapped on the shoulder and asked to work in the Premier’s office by David Reville, who was then working as a special advisor to the Premier.  An intensive year of working with Reville convinced Nick that, to be effective, civil society needs to be strongly connected to the work of government.

He honed his community organizing skills in Alexandra Park, a downtown public housing project, knocking on doors and convincing tenants to convert their rental housing into cooperative housing.  At the time Alexandra Park was one of the first extremely diverse areas of the City of Toronto; the final vote was 76% in favour of conversion.  “I learned to listen to what people have to say and create a vehicle to help them say it.  Everyone has a story; poverty is not a lifestyle choice.”

The following years were spent at Dixon Hall, a multi-service organization serving the Regent Park and Moss Park neighbourhoods in the east downtown area of Toronto.  Dixon Hall was a laboratory for how an organization could serve as a hub for a community, a “surrogate family” where residents were able to meet and support one another.   When Nick answered an ad in NOW magazine in 1998 for the Executive Director of a small agency called Stop 103, all of these lessons were put to use as he began to expand the organization by converting an unused bocchi court into a community garden, expanding the Urban Agriculture program and enhancing the community kitchen by adding a commercial-grade kitchen.  The Stop Community Food Centre now serves up dignity and empowerment to a large community by connecting food access to social justice, health and the environment.