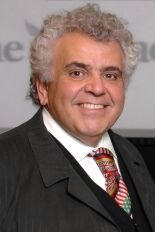 For the last twenty years, Roberto Martella has greeted neighbours, friends and celebrities alike at the North Toronto restaurant that he and his wife, Lucia, operate on Yonge Street just south of Eglinton Avenue.  The restaurant is a mix of culinary and cultural expression; a meeting place where musicians, artists, academics, entrepreneurs, writers and wine lovers come together under the spell of Roberto’s gracious and warm hospitality.  Roberto is the consummate host, connecting together food and ideas and people, all the while championing the best of Canadian and Italian culture.

Grano is much more than just a restaurant; Roberto has brought people together through Italian language classes, the well-known Grano Series (a salon series of current events), literary readings, mentoring dinners bringing new young artists and musicians together with the older establishment, a TV show, Cooking with Saints, and numerous other planned and spontaneous gatherings of the interested and interesting.  Roberto says, “In Canada our institutions have failed to bring us together.  We need to get out of our psychic enclaves and recognize how much we share in common.”

“Jane liked the idea of what she called ‘commensality’, the building of community by breaking bread together”, says Alan Broadbent, founder of the prize.  “Roberto understands this in his bones and has made Grano so much more than just a restaurant.  It has become a vital centre of social cohesion in Toronto.”

Roberto grew up in the Bathurst/Dupont area of the City of Toronto where his father owned a number of barber shops.  After graduating from high school and the University of Toronto, his first job was as an after-care officer at the St. John’s School for Boys and later as a corrections officer at the Vanier Centre for Women.

His future career began to emerge when, after a tour of Europe, he traveled to Japan on an student exchange program in 1975.  On Sado Island, he met a young Japanese drumming group, Ondekoza (now the Kodo Drummers), which combined meditation and running with traditional music.  Members of the group still travel to North America each year to run the Boston Marathon and travel to Toronto where Roberto entertains them.

Back in Canada he became the general manager of the Canadian Italian Business & Professional Association and involved in food and wine importation and small ‘p’ politics within the Italian community.  Roberto says, “1982 was a turning point for the Italian community in Toronto.  With the World Cup win, there was a spontaneous outpouring on St. Clair Avenue West.  This was before the days of the cell phone and text messaging.  It was really a coming-of-age of the community here”.

In 1986 Roberto and Lucia purchased part of the current Yonge Street property and opened the restaurant.  While Lucia oversees the kitchen, Roberto works the front of the house.  They have always lived upstairs, expanding the premises as the restaurant prospered and their family expanded.  Their home reflects the same mix of rich colours, country furniture and art as the restaurant below.  The four children, two of whom still live at home, have all helped at various times with the running of the restaurant.

In addition to the restaurant and its many gatherings, Roberto has contributed to the broader community by serving on a wide range of boards including the Canadian Opera Company, the Columbus Centre, the Institute of Contemporary Culture at the Royal Ontario Museum, the Toronto City Summit Alliance, the Toronto Symphony Orchestra, and the upcoming Luminato Arts Festival.