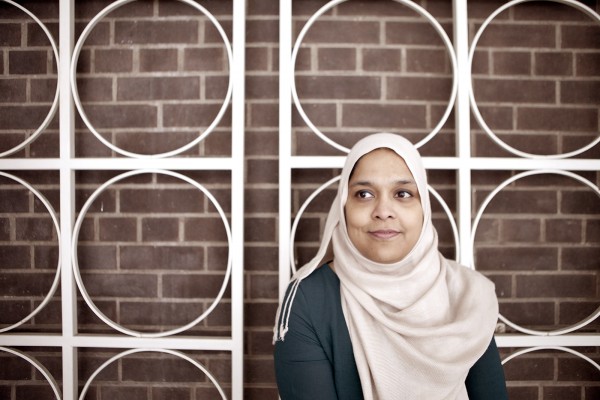 The Gentle Warrior: Sabina Ali turns a park into a village hub

Margaret Mead is often credited with having said, “Never believe that a few caring people can’t change the world. For, indeed, that’s all who ever have.” She would have understood Sabina Ali.

Ali arrived in Canada in June 2008 from India by way of Saudi Arabia, where she had worked as a teacher. “We came here to spend about three months, just like a vacation for us, because we wanted to see what Canada held for us,” she says.

She and her husband rented an apartment in the Thorncliffe Park neighbourhood and spent weekends touring the city via bus. She liked what she saw. “I like the welcoming spirit here,” she says. “Thorncliffe Park felt like it was a second home for me. Everything is so accessible: you step out of the building, you have the TTC, halal food, the park, the school…”

But she also saw what was missing. Unlike some tower neighbourhoods, Thorncliffe Park, designed in the 1970s for 12,000 residents, doesn’t have much open space. Yet today it is home to a population over 30,000 — of whom one third are school-age children.

“Thorncliffe Park is a small community; it’s about two square miles, and it has the highest percentage of children between newborns and 14 in the country: 34%,” says Ahmed Hussein, interim executive director at Thorncliffe Neighbourhood Office. Yet when Ali moved into the neighbourhood with four children, “We did not have any facility for children to play in,” he says.

“I visited R.V. Burgess Park one day and I was very disappointed,” says Ali. “I saw kids lining up for the swings. And the garbage! And I met a few women in the park and we just started talking about the same thing.” Casual conversation quickly snowballed into action. That year, the women successfully lobbied for a new playground.

Not content to stop there, the Thorncliffe Park Women’s Committee (or TPWC, as it is now known), which Ali chairs, started to think about how to animate the park in other ways. “As a group of women, we thought of how to bring the immigrants, especially the women; we wanted to empower them,” she says. “The highest percentage of the population here is South Asians — and it might be similar in the other cultures as well — where the family is given priority: children, husband, housework…and then after that you get time for yourself. How to bring these women out, with all the priorities they have?”

In June of 2009, TPWC launched an experiment: a weekly Friday night South Asian-style market in the park with food, clothing, and other goods for sale by area residents. “We started the first market with five vendors, and there was a very great response. The park was full of people, and it’s really transformed.”

In the early days, a few women would trudge to the park with heavy wooden tables borrowed from a local E.S.L classroom. Now they have their own portable folding tables for the thriving neighbourhood event. Ali is working with some of the vendors to build their businesses through established farmers’ markets. She’s also launching a market in the neighbouring Flemingdon Park high-rise community.

That’s not all. R.V. Burgess Park now features new landscaping, a refurbished splash pad, a community vegetable garden and, since 2010, a tandoor oven built with $4,700 raised by the community. The U.S. advocacy group City Parks Alliance has named it a “Frontline Park,” the first time the honour has been bestowed in Canada. And the Weston Family Parks Challenge has granted TPWC $125,000 towards extending their activities into the adjoining ravine to connect residents with nature and offer health and environmental education.

Meanwhile, Ali has been honing her abilities and lending her astonishing energy to a range of causes: the local Kindergarten Early Language Intervention (KELI) program and the Thorncliffe Neighbourhood Office, as well as Evergreen, the Toronto Food Policy Council, Access Community Capital Fund, and Thorncliffe Park Kindergarten School Design Team, among others. She took a Centre for Learning course in community development and leadership, and attended leadership training through the Maytree Foundation.

“She’s just so determined in such a quiet, forceful way,” says Dave Harvey, director of Toronto Park People. “She’s had very significant challenges getting the permits, but she never backs down. She’s such an inspiration for the people around her, especially the women. For people who are new to a country, it can be quite intimidating to deal with government. It takes very special people to say, ‘No, this is a very positive thing we can do in this space, and we’re going to keep pushing until we get it.’”

When Maytree looked for a local leader to help raise civic literacy in the Thorncliffe area as part of its wider outreach across the city, “Ali’s forceful drive to create the TPWC and then mobilize the group to create opportunities for women’s participation made her a perfect match for our program,” says Alejandra Bravo, Maytree’s manager of Leadership and Learning.

“That playground would not have been there if she didn’t take that challenge. That market wouldn’t have been there. The garden and the beautification of the community would not have happened,” says Hussein. He quotes the neighbourhood slogan, “‘Today’s Thorncliffe is tomorrow’s Canada.’ She really has that in her core principles.”

Ali views her achievements more modestly. “Being a newcomer, I was really keen to know how the system works, and helping these people was helping me,” she says.

“You just see her at the bazaars, and she’s got the cellphone in one hand, she’s got someone’s lost kid in another hand, she’s solving a problem at the same time,” says Harvey. “She never gets riled. She just makes things happen; she’s a real inspiration. We need some more Sabina Alis out there.”