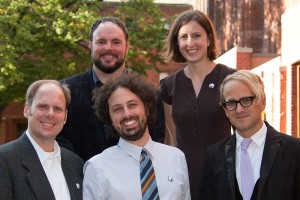 Imagine you have your personal guide through the streets of Toronto. Someone who walks with you as you discover the hidden gems of the city. Someone who opens your eyes to what makes this city work, what can be improved and how it all fits together.

For the last seven years, Spacing Magazine and its team of editors have been this guide. The team – Matthew Blackett, Dale Duncan, Todd Harrison, Shawn Micallef and Dylan Reid – are the recipients of one of the two 2010 Jane Jacobs prizes.

From its beginnings in 2003, Spacing has celebrated the public spaces of Toronto and its residents who inhabit, use and play in the city’s streets, sidewalks, laneways, parks, ravines, green spaces, transit and underground systems.

The magazine’s editors look very carefully at how the city works, what the street-level dynamics are in this city, and how we work together in the city economically. This, of course, is very much in tune with Jane Jacobs’ ideas that rather than starting with an ideological or theoretical approach about how things work, you should start with observing closely and drawing your lessons from there.

As Matt Blackett, one of Spacing’s founders, explains, the magazine has a strong focus on the good things that are happening in the city. The magazine and its website (www.spacing.ca) help us understand parts of the city that many of us do not visit or live in. They always start at the level of the street and what actually happens in the urban landscape; they reveal what is hidden but should be seen and understood. They even make the suburbs look good and show that they are not the complete wasteland as many would describe them.

Picking up a copy of Spacing, you may come across an article about the beauty of sewer maintenance hole covers, a feature story about the rules that govern Torontonians in their daily lives, a map that shows where we live dictates how Torontonians get around, and a special issue on water describing everything from wading pools, the ravines to water towers.

Spacing is not an advocate for a particular issue. With its collective team of writers it promotes the healthy discussion of a whole range of issues from a variety of perspectives. It has become influential in the city by drawing together a whole new generation of writers, photographers, illustrators and bloggers who love the city and observe it and interact with it. They have made a decision to make Toronto their home. They want this city to be one of the greatest places to live in this country if not the world. And over the years many of these writers have spread out to other publications and taken their interest and influence on city issues with them.

As Matt says, “You can complain all you want, but if you don’t do anything about it, if you don’t share your ideas, you end up with the city that you deserve. From that perspective, we want to get out there and make sure that our voices are heard.”

When Spacing began, media coverage of city issues had often been negative and issues such as the TTC and development were treated in isolation. But these issues are inter-related. Matt explains that “our job, we thought, was to make sure that those connections were always being made. So that if you want, you can have a nice big and beautifully designed building. But if you don’t have proper transit to support, then people are going to drive and your experience of the sidewalk outside that beautifully designed building is not nearly going to be as nice as it could be.”

Increasingly, Spacing exposes us to the best of what works in cities across Canada and around the world. Themes such as sustainable living, successful community planning, and smart development are being explored.

Then there are the subway buttons. Since 2004, as a way to raise revenue, Spacing has sold buttons depicting Toronto’s subway stops. They were an instant hit and you can still see many people walking around wearing one. The buttons “were bought mainly as a way to express some kind of hyper-local boosterism. Since then, we’ve heard numerous reasons why people have purchased the one-inch buttons: to remind a young child of their subway stop; a homage to all the places a person has lived; the buttons have even been used in weddings with each table representing a station.”

Thanks to the Spacing team’s passion for Toronto and its suburbs, we can discover and re-discover Toronto – seeing its places and spaces in new ways. Spacing is the perfect guide to how this wonderful city changes, lives and works.