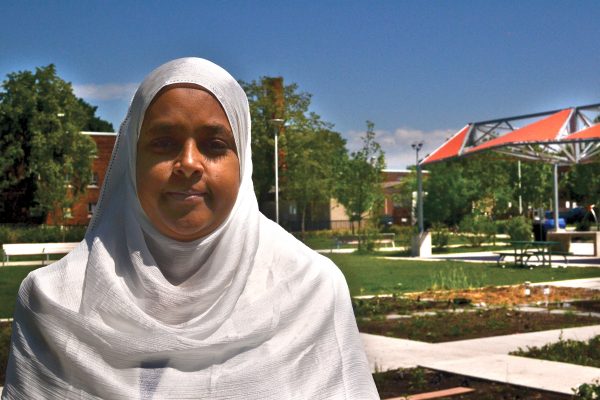 The Regent Park Arranger: The ever-positive Sureya Ibrahim unites a community in transition

Growing up in Ethiopia, Sureya Ibrahim never learned to swim. So when the Regent Park Aquatic Centre opened, she dove right in — in every sense. In fact, Ibrahim has plunged head-first into the process of reshaping social relationships in the Regent Park community, where transplanted Toronto Community Housing (TCHC) residents and newly arrived condo dwellers are learning to live together in an altered landscape.

Ibrahim’s biggest jump didn’t happen until a 2010 course with the Immigrant Women’s Integration Program. With her three children (now 11, 15, and 18) in school, Ibrahim went looking for some time for herself, but discovered her passion for investing her time in her community. “Whatever I’m applying right now is because of the program,” she says.

“The program, how that empowered me! I was very shy; in my family I was the last person [to speak up]. Everybody will take advantage of you if you don’t speak.” Now, as a community engagement worker at The Centre for Community Learning & Development (CCLD), she’s paying that empowerment forward. “When I see some people in the same shape as me, I want to run and help them,” she says. “I see myself in them.”

Last year, Ibrahim received the Women Who Inspire award from the Canadian Council of Muslim Women, the Distinguished Service Award from the Muslim Association of Canada, and the Phenomenal Woman award from the CCLD for her astonishing range of activities. She coaches newcomers in the program that changed her own life. She’s kick-started yoga and zumba classes, Safe Food Handler’s training for women in a catering co-operative that she’s pulled together, neighbourhood clean-ups, and a sewing group.

She’s a one-woman community liaison department who works with local police, the RCMP (co-ordinating education on topics like ISIS), and the Children’s Aid Society, an organization feared by some community members. She works to build bridges between condo owners and TCHC residents. She’s on the neighbourhood crisis intervention team.

All these projects reinforce one another, building up community capability like the threads in a piece of fabric. “One young man told me that after his mother gained her food handling certification for the catering group, she finally had confidence to answer the phone in English,” says Regent Park volunteer and condo resident Mary Henkelman, who is working with Ibrahim on starting up a neighbourhood association.

She’s precisely the advocate and connector the community needs. “The revitalization of Regent Park created hardship for many,” points out Marian Yusuf, Nutrition Consultant, Food Strategy at Toronto Public Health. “Sureya became a voice for these who were affected so that the relocation and the move could be done in a very sensitive manner.”

“She’s got a very positive attitude,” says Kevin Moore, who works in community outreach for the United Church. Ibrahim has collaborated with him on interfaith projects in the community. “She doesn’t wait for things to happen around her.”

When Daniels Spectrum opened, community members were invited to use the beautiful new space. But “when people started approaching them, there [were] a lot of barriers,” says Ibrahim. She took it upon herself to advocate for the City to cover the insurance for community-organized events. Similarly, the splendid new swimming pool was accessible only in theory; Ibrahim attended consultations to make sure there would be women-only pool times and classes. She got extended swim times, and she helped pool staff understand the swimwear dress code practised by Muslim women.

“Sometimes when I see the homeless doing drugs or there is a shooting, I feel so sad,” says Ibrahim. “We have all the tools to prevent, but at the same time we are not doing it collectively strong enough to prevent it.” An obstacle? No, just one more challenge. “If we work with other groups, finding common goals to alleviate the poverty or the suffering,” she says, “I think it’s possible.”

Profile by Sarah B. Hood; photo by Matthew Blackett