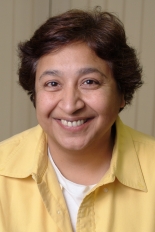 Uzma Shakir’s first experience of Canada, fifteen years ago, was as a young wife and mother isolated in a suburban community. She became involved when one night a young woman called Uzma’s home to seek advice from her husband who was a lawyer. Recognizing that the woman needed counselling resources rather than legal advice, Uzma began phoning for appropriate help and promptly found herself on the board of directors of one of the agencies, the Riverdale Immigrant Women’s Centre.

She is now Executive Director of the Council of Agencies Serving South Asians (CASSA), a position she has held since 1997. She believes passionately that “democracy is something we live and that Canada is a country worth fighting for”. She is an advocate for greater representation for all immigrant communities in policy, institutions, service delivery and societal participation on the principles of access and equity. Although CASSA focuses particularly on issues within the South Asian community, Uzma has worked extensively to create alliances among many of the Toronto newcomer communities and is particularly proud of the recent partnership which has been created among the Asian, Hispanic, Chinese and African communities to co-ordinate joint events, strategic planning and research. She believes passionately that one works from one’s differences in background and culture through to negotiated agreements.

Uzma believes strongly that engagement and participation, particularly at the local municipal level can have a strong impact on the quality of life in the city. “Toronto is an exciting experiment in diversity”, she says and with CASSA she works hard to attract civic participation and engagement from the South Asian community.

Uzma was born in Karachi, the youngest of three children, and raised by parents who had both settled in Pakistan after Partition. Although she was raised in a traditional, religious household she speaks of her parents as uniquely progressive in their emphasis on equal education and opportunities for both her brothers and herself. She received a B.A. in English Literature from Karachi University, a B.A. in International Relations from Sussex University, and a Master’s Degree from the Fletcher School of law and Diplomacy, an international training school for career diplomats.

She has worked extensively through her research and advocacy to challenge existing notions of research epistemology and develop an anti-racist conceptual framework for research methodology. She challenges the notion of “objective research” through her involvement in domestic issues involving immigrant communities and in particular, the area of mental health. She believes that in order to adequately understand these complex issues it is important to have a personal, emotional investment.

As a community activist, Uzma is involved in a wide variety of other organizations including the Ontario Council of Agencies Serving Immigrants, the Association of International Physicians and Surgeons of Ontario, Coaltion for Accessing Professional Engineering, National Anti-Racism Council, Pan-Asian Network, Alternative Social Planning Group, Community Advisory Committee of the Family Wellness Centre at Scarborough Hospital and the Riverdale Immigrant Women’s Centre.