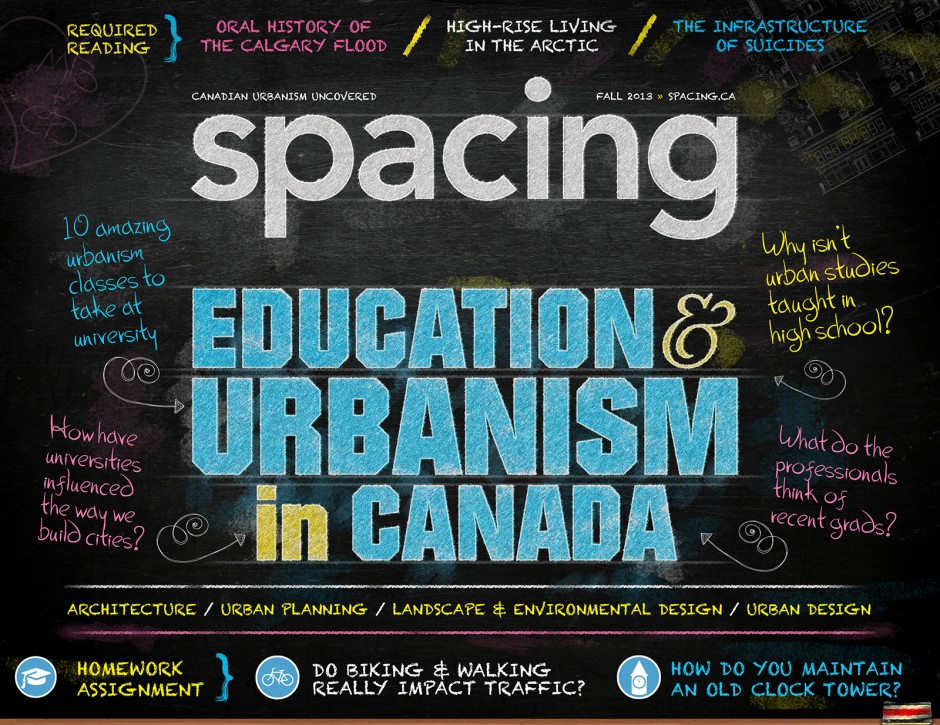 The Fall 2013 edition of Spacing examines the world of urbanism and education in Canada. Our contributors ask a lot of questions: Are our universities teaching the skills needed for the challenges of 21st century urbanism? Are there new techniques and tools to teach urbanism to a younger generation? Are recent graduates emerging from schools with the know-how to deal with real-world work problems? What kind of influence have universities played in shaping our current cities? And why isn’t urban studies taught in high schools? The 15-page section delves deep into these topics.

The other major features in the issue include:
• Personal stories and a photo essay on the floods that hit Calgary in the summer of 2013. Spacing’s staff writer for the summer, Graeme Bayliss, looks at how investing in suicide-prevention infrastructure can save lives.
• Jesse Colin Jackson and Lindsay Bell document the Mackenzie Place high-rise in Hay River, Northwest Territories: it’s the tallest structure in the world north of the 60th-parallel.
• Chris Bateman follows the man who keeps Toronto’s Old City Hall clock tower ticking.
• Spacing senior editor Dylan Reid uncovers how walking and biking can have a significant effect on traffic congestion in Canadian cities, but only if municipalities are willing to tweak their policies and infrastructure.

You can also find features on polite political corruption, the preservation of 81st St. in Edmonton, what happens to a tree once it falls down, new wayfinding signage in Calgary and Vancouver, and many other stories about Canada’s unique urbanism.