Toronto's inner suburbs are often bemoaned as unconsidered sprawl. But these areas were planned with clean direction, representing a series of experiments in modern planning unique to North America. Most distinctly characterized by the development of nearly 1,000 high-rise apartments, the development of Toronto's inner suburbs can be understood as an attempt to create a series of equitable, self-sufficient, and model communities for the postwar world.

High-density "hot spots" and the planned communities that surround them offer an understanding of the intent behind the management of Toronto's postwar growth. Toronto represents a hybrid suburban form, drawing inspiration from both experiments in mass housing by European welfare states, and large-scale private development model of America. The formal result is the tower and bungalow landscape ubiquitous to suburban Toronto, yet oddly absent from the majority of the North American experience.

At the close of World War II, Canada faced an acute housing shortage that was especially severe in Toronto. The City took out newspaper ads warning "Do not come to Toronto, Ontario for housing accommodation." People moving to the city needed to obtain a permit from an Emergency Shelter Administrator to allow them to look for accommodation.

In response, all three levels of government collaborated on a series of initiatives to promote housing development and suburbanization. The Province of Ontario passed the Planning Act in 1946 and then created the Municipality of Metropolitan Toronto in 1953, a new regional government to build infrastructure and guide growth in the expanding suburbs.

In these efforts, the role of private markets was always strongly emphasized. At the federal level, mortgage insurance programs helped to direct huge amounts of capital into the building industry, and to promote the creation of large, capable development firms. Thus, Metro Toronto's first major planning document, the 1959 Draft Official Plan, stated that "development has been and will be primarily the result of private enterprise, with government, at various levels, in a supplementary and regulatory role."

Toronto emerged as one of the continent's fastest growing regions, developing hundreds of thousands of units in the subsequent decades. Yet what was remarkable about this process was the degree to which Metro influenced private development and played a major role in shaping the postwar suburbs into a highly realized expression of mid-century modernist planning ideals.

In his autobiography, Life Begins at 65, Toronto planner Hans Blumenfeld described the central idea behind Metro planning as the equitable distribution of housing, employment, and transport options, in order to create self-sufficient macro neighbourhoods throughout the expanding region.

In directing the region's growth, Metro was divided into a series of planning districts, each of which was responsible for a long-term plan. Districts were conceived of as semi-autonomous units within the metropolitan framework, equipped with industry, shopping, commercial, cultural, and community centres, and ample natural open space, along with a full range of housing options — high-rises chief among them.

This process of District Planning is exemplified in District 12 (today known as the Peanut), a community planned for 95,000 and located at the fringes of the urban area north of the 401 in the former municipality of North York. The area provided a carte blanche on which Metro's planning ideas could be fully realized.

The 1965 District 12 plan outlined some of the major policies framing development within the District. These included: a combination of rental units and ownership properties, with family housing in low, medium, and high densities; a full range of facilities and services, resulting in a self-sufficient community

convenient to residents; land use policies that controlled intensification, diversification and sophistication to enable major commercial, institutional, and recreational uses within the district; and, perhaps most interestingly, "a net density for the area of 75 people per hectare…in order to avoid the under-utilization of municipal infrastructure and in order to [facilitate] the complementary public and private facilities desirable to serve the district as a substantial sector of Metropolitan Toronto."

Achieving these density benchmarks within the District, while also satisfying additional requirements such as extensive conservation areas, industrial lands, commercial areas, and traditional low-rise neighbourhoods, resulted in a remarkable 67% volume of multiple housing, with 50% of all housing in the district consisting of high-rise apartments. These apartments were located in dense concentrations at the edges of low-rise neighbourhoods, along arterials in areas that had "quick access" to the planned Don Valley Parkway.

High-rise housing became Metro's primary tool for managing growth and financing infrastructure. Density targets were intended to both fully utilize and generate tax revenues for large new systems of transportation, sewer, and water infrastructure. As noted in a North York Planning Department document, "It is to the Municipal advantage to provide for the highest possible eventual density having regard to the assessment picture and the utilization of services." In fact, density benchmarks were only limited by the capacity of the new Metro sewer.

Blumenfeld wrote that high-rise housing also contained a social agenda, enabling a demographic mix within new communities and offering affordable housing for the elderly, young couples, and single workers. The physical result of areas such as District 12 are a series of master planned, tower block communities that today are among of the defining features of Toronto's Metropolitan era of growth. 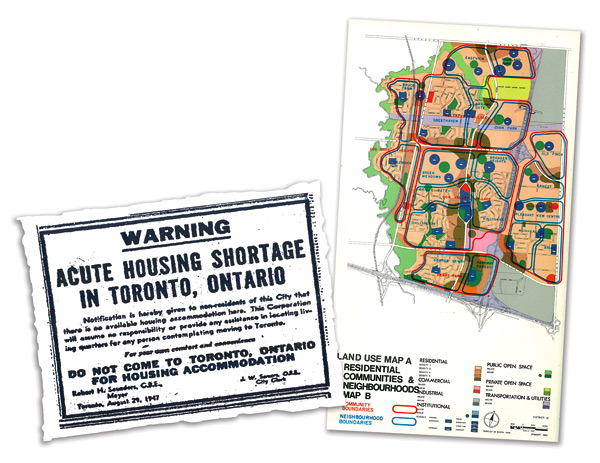 In 1947, the City of Toronto advertised in national papers about a lack of housing (left). The Peanut neighbourhood plan shows what City planners envisioned for the area (right).

Beyond the startling concentration of high-rise apartments, a remarkable organizing element of District 12 is the Peanut — a dramatic fork, or large roundabout, in Don Mills Road between Sheppard and Finch avenues. Here the hand of the designer (or municipal planner) is evident. Tapering slightly in the centre, District 12's ring road resembles a peanut when seen from the air or the upper floors of the surrounding high-rise apartments. The void in the centre of the Peanut was conceived as a community centre and is filled with a public programme including an ice arena, two public schools, a church, a park, and a district shopping centre.

The Peanut has similarities to other master planned communities throughout Metro, particularly the highly influential community of Don Mills, begun in 1953. It first appeared in a 1964 district plan by the consulting firm of Proctor, Redfern, Bousfield and Bacon. John Bousfield, one of the principals of the firm, was also planning director of Scarborough when the township produced its first Official Plan in 1959, which may explain the presence of similar

master-planned communities with ring roads throughout northern Scarborough. Much further afield, the Peanut has similarities to Frankfurt's contemporaneous Nordweststadt, built adjacent to Ernst May's famous Romerstadt, suggesting that both responded to similar trends in modern planning.

Also echoing Nordweststadt, District 12 was originally planned to provide rapid transport to the city centre. Although its arrival was delayed nearly 40 years until the opening of the Sheppard subway line terminus at Don Mills station, its presence in the original plan speaks to the ambitious nature of Metro planning, concerned with achieving regional functionality through major infrastructure, and balancing public and private objectives.

In the context of the sprawling hop-the-county-line suburbia often attributed to North American postwar development, Toronto's Metro-era suburban developments such as the Peanut are remarkable. In their most ideal sense, these initiatives were planned as multi-functional, well-serviced communities that were part of a growing and multi-nodal region. This was indeed the "smart growth” of the 1960s.

High-rise housing was the dominant form of suburban growth from 1960 to 1980, outpacing the single-family home by a ratio of two to one. As part of their significant legacy, they help give the Toronto area one of the highest regional densities on the continent — nearly twice that of Greater Chicago — which was a good start in achieving a well-planned and sustainable region.

Yet, realized through the lens of 1960s, ideals of the separation of uses and the scale of the car has led to the familiar livability challenges and harsh criticism of these communities. As Toronto and the GTHA undertake regional planning initiatives to address today's challenges, reinterpreting the progressive ambitions of self-sufficiency contained in the intent of these community plans of 40 years ago offers substantial opportunities to support today's goals of enabling a green, connected, equitable, and prosperous region.

The Toronto area's heritage of modern planned communities offers a remarkable precedent for a thoughtfully planned region, and context for reengagement to address the needs of a 21st century city. They are in need of thoughtful second look.