Imagine standing on the corner of busy Queen and Spadina. The traffic is rushing, the people are bustling, the horses are neighing. Wait — the horses? With the car being such an overwhelming part of today's urban landscape, it's difficult to imagine a time when cities were organized around a different mode of transportation. Toronto's birth in the 1780s was during a time when city planners needed to accommodate the horse in the urban environment, and to this day it's easy to spot holdovers from the horse-drawn era.

Most of the oldest residential neighbourhoods in Toronto have back alleys that serviced coach houses: small, two-storey structures that would hold a carriage and a horse on the ground floor, and an apartment for the carriage driver and his family upstairs. Long-established areas like the Annex and Rosedale have plenty of these tiny houses, which have been repurposed in a variety of ways. Some coach houses have been reborn as storage, guest suites, or bed-and-breakfasts; and Coach House Press, a well-respected publishing house founded in 1968, prints and publishes books from a livery stable on bp Nichol Lane.

Commercial areas of Toronto also needed to accommodate horses. The Horseshoe Tavern, established as a bar in 1947, first opened in 1861 as a blacksmith. The Front Street stables for the Toronto Street Railways, which used horses to pull the trains until 1894, now houses a theatre school for young people. The Canadian National Exhibition, which began in 1879, also accommodated carriages.

While buildings can be renovated or torn down, roads and streets are relatively stable parts of the urban landscape. Spadina Avenue is unusually wide between Queen Street and Bloor Street, with a loops through Spadina Crescent. Planned by Dr. William Baldwin in the late 1820s, the avenue's thoroughfare-like elements were intended to draw settlers to that part of the city. It could be envisioned as an early version of the Spadina Expressway.

Relying on horses in downtown Toronto wasn't easy for early residents. Horses are large animals, and they created millions of kilograms of waste. In days before street cleaning and pavement, horses contributed to the fledgling city's sanitation problems. Using horses could also slow modernization: the animals were spooked by noisy steam engines, which discouraged their use downtown. People eventually turned to other methods of transportation, and the City began to demolish or repurpose the horse-based infrastructure upon which Toronto was built. 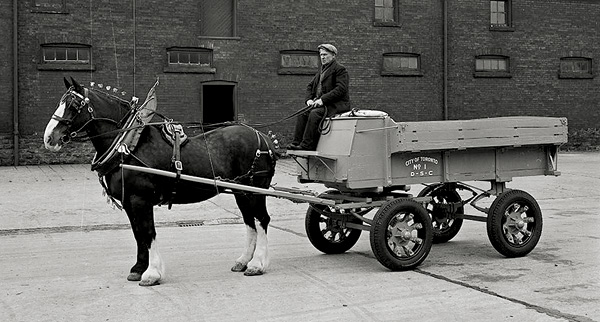 The City of Toronto's workforce has roughly 40,000 employees, and most of us would assume that staff was made up almost exclusively of humans. But from the city's incarnation in the late 1700s up until the late 1940s, a fair number of workers for the local government were of the equine variety.

A quick search of the word "horse" on the City of Toronto Archives' website will return a handful of photographs, from the 1890s through to World War II, detailing how local governments put horses to use for a variety of civic services: garbage collection, street sweeping, fire and medical response, police units, and public transit.

The only remaining horse employees of the City exist within the Toronto Police Services mounted unit division, which operates out of the Exhibition Place grounds.