In the craziest billboard jungle in Canada, advertisers will go to extreme lengths to get noticed. A lucrative business has been growing strong for the past 17 years, as shrewd companies have targeted an ideal captive market — motorists stuck in gridlock on Toronto's Gardiner Expressway.

The densiformus plant, a small needled evergreen, spells out logos of companies like FedEx, Chubb, and TD Waterhouse in attempts to nab the attention of passersby on the busy thoroughfare. A reported 350,000 people take in the ads in the course of their daily grind. With land leased from CN Rail, the ten-metre long topiary ads have become an entrenched city landmark over the past 17 years, strung along hillsides that line the western gateway of the downtown channel, from Dowling to Roncesvalles.

But where exactly did the ads come from?

Hillside Communications, the private company behind the ads, was created in the late 1980s to install, monitor and upkeep the topariums (as they're called in marketing lingo). After winning the option to lease, they say the ads came rolling in — 14 logos now branding the slopes, up from the initial five. Advertisers are varied.

It's not just bottom-line businesses that invest — warm and fuzzy organizations like the United Way now use the unusual vantage point to remind commuters to donate. And the City of Toronto has maintained a central spot on the hillside since the project's beginning for free.

Yet the use of the land for strategic advertising has been a thorny issue since its inception. Hillside says they removed 23 tonnes of garbage in 1988 to make the spot usable for implantation — an admirable feat considering the detritus that scars much of the roadsides in the urban core.

What the company failed to mention, though, was the previously reported use of the space by less cash-rich citizens. In June 1988, the Toronto Star reported the landscaping initiative forced out drifters who inhabited the remnants of an old bridge along the embankment. Dennis Flynn, the then Metro Chairman who presided over the ribbon cutting ceremony, encouraged residents to look elsewhere for living space — like city hostels.

"I don't think people should degrade themselves by living at less than their capability," Flynn was quoted as saying. 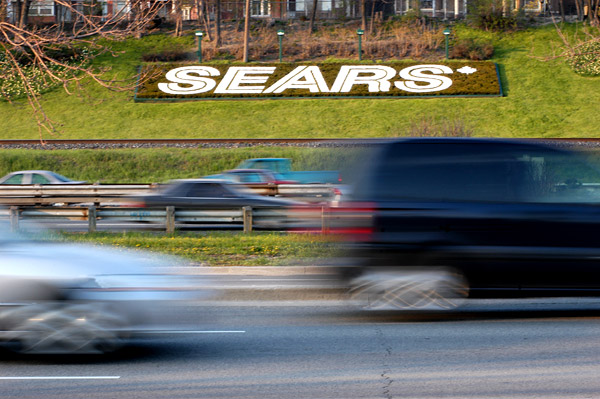 The spot has now long been abandoned as a potential site for squatters, but vigourous maintenance on the part of Hillside hints at the value of the ads for corporate entities. The company employs 14 full-time employees at peak season, meaning at times there's a staffer on hand for each one of the ads, due to the ongoing labour of upkeep.

Part of Hillside's deal with companies include prompt snow removal from the logos, vigilant landscaping to make sure they're in peak shape and even full-fledged replanting when a company rebrands itself or changes its name over the years — like the nominal chameleon of Rogers, which has switched its sign at least three times. The company has been reported to use lawn make-up in cases of drought and browning, in order to keep the greens pristine.

So what's the cost for top-tier service? As the figures have never been released, the price of the ads is unknown — and unlikely to be made public any time soon. What the company will say, though, is they're a steal at about two-thirds of what normal Gardiner billboards demand (which range from $13,000 to $35,000 a month).

Yet advertisers eager to jump on the floral bandwagon shouldn't get too excited, as company turnover for the spots is extremely low, and more topariums won't be offered along the Gardiner any time soon. According to Hillside, there's no prime space left to plant, and 14 is the maximum they'll go.

Which is probably good. A 1999 City of Toronto works department report found that the accident rate along the Gardiner is twice as high as on the Don Valley Parkway, though they share nearly identical traffic volume. City staff have pointed to the ad environment as the cause.

Westbound drivers, though, may see some new additions yet — the city council of Hamilton has been batting around an idea to bring the botanical bonanza to Steeltown — along the Lincoln M. Alexander Parkway, otherwise known as "The Linc." The concept has been in development for nearly three years, meaning potential for ad gardening beyond the Gardiner — riling up fans and foes alike.