Image:  There sure do seem to be a lot more bikes on the road than there were 7 years ago…at least on the corner of Berri and Cherrier

Last February, the AMT released the preliminary results of their 2008 Enquête origine-destination, a transportation survey of 156,000 people in Montreal’s ever-growing metropolitan region. The AMT’s report spun the data to place the focus increasing transit ridership. Being a transportation nerd, I kept checking back for the full report, particularly in order to shed some light on my hunch that cycling is on the rise in the city.  I recently noticed that the AMT has quietly released a spreadsheet detailing the 4.4 million trips that Montrealers make every day.

As far as I can tell nobody has taken on the task of learning what this survey can tell us about the state of active transportation in Montreal, so I have delved into the sea of data to see what I can turn up. Here I present the fruits of my number-crunching, followed by a bunch of cautions and disclaimers.

Happily, I found a small increase in active transportation: 12.3% of trips were done on foot or by bicycle, compared to 11.4% in 2003.  The AMT estimates that there are 544,150 round-trips are made by foot or bike each day, although it is quite likely that this number varies with the seasons (the survey was done in the Fall).

Although there was a consistent increase across the metropolitan area, the difference is slightly more pronounced in the city centre. The neighbourhoods where over a quarter of trips made on foot or bicycle now include Outremont, Centre-Ville, Petite-Patrie and the Sud-Est. Longeuil also equals many parts of Montreal in terms of active transportation.

In the Plateau Mont-Royal, the hot-bed of the alternative transportation discourse, cycling and walking accounted for 37% of trips in 2008, up from 31% in 2003, surpassing the automobile as the most common mode of transportation.  Keep in mind that this is before Projet Montréal took the reins, before BIXI was introduced, and mere weeks after the Maisonneuve bike path was built.

Is it due to better infrastructure and planning, education, economics, or even fad? The results presented here are meant to be more of a conversation-starter than the gospel. I am no statistician, and frankly, I found this data was poorly explained and difficult to manage, mainly for the reasons stated below. Here are a few things to take into account when looking at this analysis:

And here are some regional comparisons: 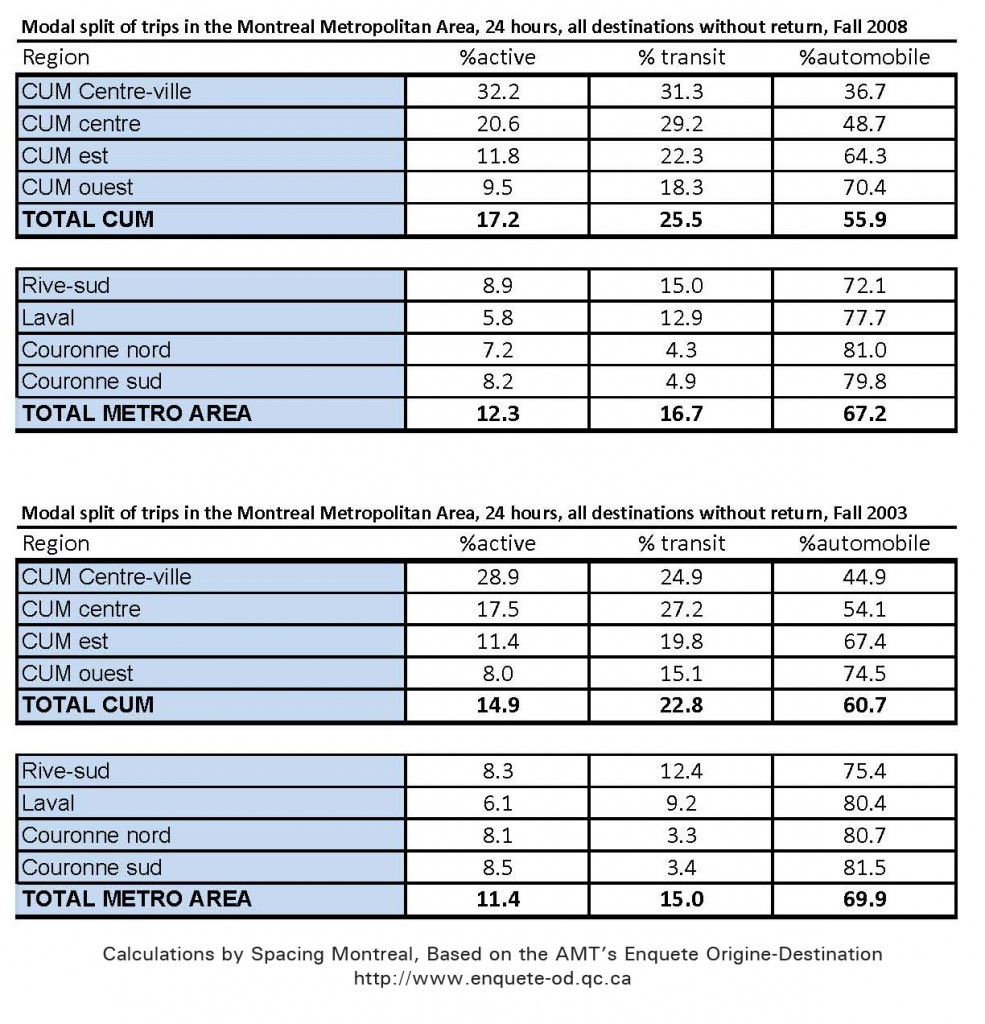 Turns out that the 25% transit ridership that was much tooted earlier this year was specifically referring to the morning rush-hour on the Island of Montreal.