Photo from 1850s of Beaver Hall Hill, the Anglo prestige district of the mid 19th century. The street visible in the foreground is modern-day St-Antoine.

In most unequal societies across time the rich have a tendency to stick to themselves, and Montreal is no exception. Throughout our city’s history there have been special neighbourhoods, accessible only to the most wealthy. The recent debate around the Redpath Mansion put the spotlight on one, the old Golden Square Mile. Once a residential neighbourhood for the ultra-rich Anglophone elite of a very different Quebec, it is now in the heart of downtown; its former residents have moved on, leaving behind them a trail of opulent heritage architecture. But the Golden Square Mile is only one of a number of prestige districts that have existed in Montreal. Let’s look back in the city’s history and trace the trail of money through time and space.

The early Montreal of the 17th and 18th centuries was little more than a frontier town of a few thousand people and almost everyone lived within the small territory inside the city walls. One has to wait until the early 1800s to see the first distinction between where the rich and where the common people lived. As the city outgrew the walls, wealthy merchants continued to live in grand stone houses on the inside, while the poor increasingly moved outside the walls to build simple wood shacks in the new faubourgs that were developing around the city gates.

As time went on and the city became larger and denser, certain members of the Anglophone elite built “country homes” on the slopes north of Victoria Square leading up to the mountain, in what was at that time Montréal’s agricultural hinterland. One of the most notable was Burnside, the estate of fur trader James McGill which would go on to become the centre of McGill University’s downtown campus.

Through the course of the early 19th century, Montreal continued its expansion and much of the Anglo elite left their former homes in the increasingly crowded Old Montreal and took up permanent residence on the lower slopes of the mountain. By the mid-1800s this move was more or less finished. The 1850’s and 60s saw the construction of numerous protestant churches in the area such as the Christchurch Anglican Cathedral as well as the since demolished St. Andrew’s Church (at Beaver Hall Hill) and St. Paul’s Church which was originally built where Place Ville-Marie is located. It was later moved, stone by stone, to become part of Collège St-Laurent. Now located in the heart of downtown, they were in overwhelmingly residential neighbourhoods when they were first constructed. The Dow House, built in 1860 at the corner of Beaver Hall and modern-day René-Lévesque. It is one of the few remaining buildings that hark back to that area’s past as a well-to-do residential neighbourhood.

While most wealth during this period was concentrated amongst the Anglophone merchants, a comparatively modest francophone petty bourgeois district began to form as well, this time around Square Viger. Built in 1857, the Square quickly became a favourite of the francophone upper middle-class, with its beautiful gardens and opulent fountain. They built their homes around it and on the surrounding streets such as St-Denis , Berri, and St-Hubert in what is now the Latin Quarter. The area came to host a number of prestigious institutions such as the Université de Montréal, the École Polytechnique, and the École des hautes études commerciales, a powerful symbol of a newly developing francophone business elite. Row houses on St-Denis near de la Gauchetière. Built in an understated Neoclassical style, they would have once housed upper middle-class francophone families. Like much of this part of town they have seen better days.

Very little of these early 19th century neighbourhoods remain. The original merchants’ homes inside the old walls were demolished when the area became a primarily commercial district and most the architecture we see today are office buildings and warehouses dating from the late 1800s. The old Anglophone elite neighbourhood has also largely been replaced by the modern downtown, with few traces remaining. Its Francophone equivalent around Square Viger has been largely destroyed by the construction of the Ville-Marie Expressway and general neglect. Both districts lost heritage buildings to the expansion of Dorchester boulevard, later renamed René-Lévesque.

As the 19th century progressed, Montreal’s growth reached an unprecedented pace. Rapid industrialisation pulled hundreds of thousands of migrants to the city, both poor French-Canadian peasants from rural Quebec and international immigration from the Old World. Montreal’s population doubled between 1870 and 1890, and then again between 1890 and 1910.  And like the city as a whole, the prestige neighbourhoods expanded and changed. The Peter Lyall House, a Golden Square Mile landmark that was built in 1889.

The Anglophone elite continued its migration further west and higher up the mountain. This was the period of the Golden Square Mile, whose heyday was between 1890 and 1930. There lived the McTavishes, Molsons, Redpaths, Shaughnessys, and other families whose names are synonymous with turn of the century Canadian capitalism.  Sherbrooke St. West would become one of the most desirable streets, sometimes being compared to Paris’ Champs-Élysées or New York’s 5th Avenue. Unfortunately, most of the mansions of this era met the wrecking ball to be replaced with office buildings and modernist apartment towers as the city’s downtown shifted from Old Montreal to its present location. On the francophone side, money climbed north of Sherbrooke to establish itself around Square St-Louis and the surrounding boulevards. The striking mansions on Laval avenue are a testament to this era. Unlike the relatively well defined anglo prestige neighbourhood, wealthy francophones tended to live on high-status wide, once tree-lined avenues like St-Denis, St-Hubert, Sherbrooke East, and the streets boardering Parc Lafontaine. Interspersed between these areas were narrower streets housing residents of more modest means. One of the grandest mansions on Laval avenue, the Pierre-Desforges house, built in 1901.

Unlike its anglophone equivalent, most of the ornate residences of this neighbourhood have survived to the present day. The well-know gentrification of the Plateau could in some areas be more accurately labelled re-gentrification as better off residents establish themselves in sectors which had one hundred years earlier been the haunt of wealthy businessmen, lawyers, and doctors. By the 1920s and 1930s these areas were increasingly being incorporated into the city’s downtown, and the rich migrated once more. It was during this period that the more well known bastions of Anglo and Franco wealth, Westmount and Outremont, were established. Both these municipalities were founded in the late 1800s, but their growth really took off in the beginning of the twentieth century. By the end of the 1930s the transformation was more or less complete and the stately mansions of the turn of the century were progressively subdivided into apartments as the rich took refuge on opposite flanks of Mount-Royal. This geography of wealth would continue through the end of World War II. 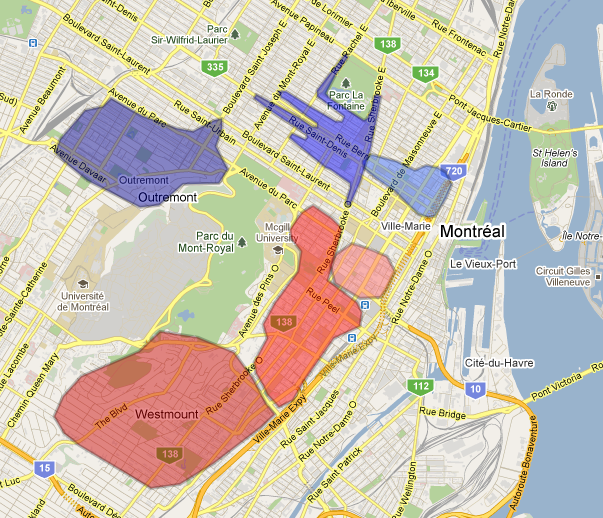 An approximate representation of the neighbourhoods mentioned.

Over the course of more than a century of industrial development (early 19th century to mid 20th), the trend was one of westward migration of Anglophones and northward migration of Francophones. On the map above blue is francophone, red is anglophone. The lightest areas represent the situation in the mid 19th century; Beaver Hall Hill and Square-Viger/Quartier-Latin. The mid-tone is the turn of the century; the Golden Square Mile and the Plateau around Square St-Louis and Parc Lafontaine. And the darkest are early to mid 20th century; Westmount and Outremont. This is hardly an exhaustive list of all areas where the rich have ever lived in Montreal, but it gives and idea of the general trends and an explanation of why our heritage treasures are located where they are across the city.

Since the postwar period, the geography of wealth and prestige is less clear than it once was. The arrival of the Quiet Revolution and the gradual softening of Montreal’s traditionally pillarised society also meant the end of a strict division between the anglo and franco elites. Some people moved to the Town of Mont-Royal, others to the lake-front West Island municipalities, and still others to a wide variety of off-island suburbs.  There is also the added complexity of more wealth coming back into the central city, with gentrification and the construction of new exclusive condo developments in the area around downtown. But most importantly, the arrival of the automobile shattered transportation barriers and like urban development in general, wealth sprawled across the metropolitan region, defying the clear spatial categories of previous eras.