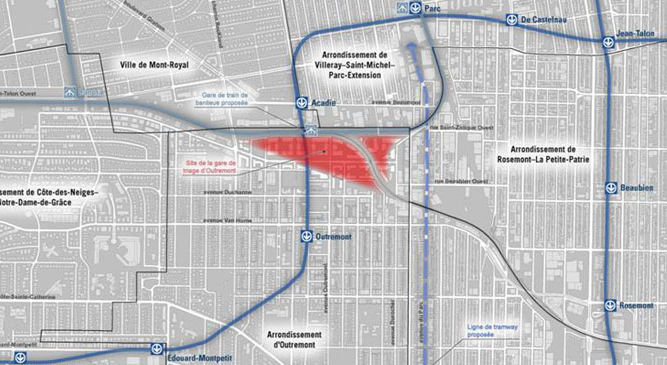 The past decade has seen the construction of major university building projects at Montreal universities, notably at Concordia and UQAM and to a lesser extent McGill. The Université de Montréal is also looking to expand, but according to administrators it has few options at its current Côte-des-Neiges campus given its location up against the side of Mount Royal. As a result, the university has set its sights on the former Outremont Railyards as a location for the construction of a second campus.

However, this plan has not been universally well received, all the more so in light of UQAM’s Ilot Voyageur construction debacle. Jean-Claude Marsan, former Dean of the UdeM Architecture department, believes that a second campus would be a financially risky endeavour and that the university would be better maximising its current campus. Others point to the university’s sale of 1402 Mt-Royal avenue to developer Frank Catania as a sign that the university was never really interested in exploring other, less grandiose options. Despite criticisms, the university bought the property from Canadian Pacific in 2006, and immediately set to work designing a campus on the property.

An initial proposal was presented to the city in 2006. Consultations were organised (largely in Outremont) the following year by the Office de consultation publique de Montréal to sollicit input on the plan and its integration into the surrounding neighbourhoods. Following reccomendations from the OCPM, a revised project was presented in May of 2010. Details of the projects can be found on the university’s website. 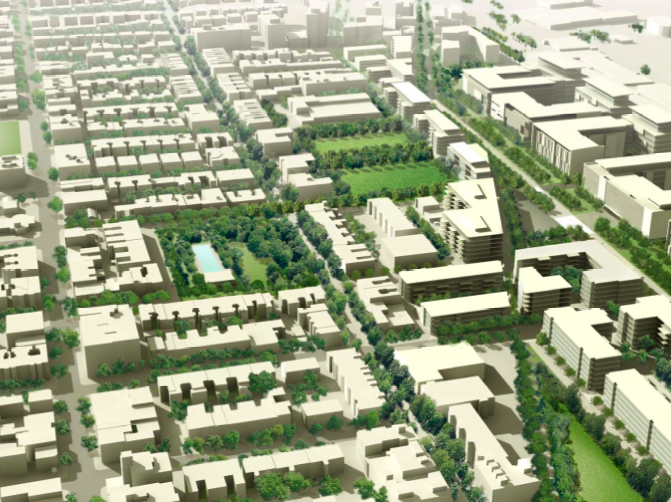 UdeM’s conception of the site, viewed from the east. The street on the left is Van Horne.

The project would bring an estimated 10,000 students and employees to the area, meaning significant changes for the sector. As is often the case with such large projects, nearby residents have expressed concerns on how such a development could affect their neighbourhood. In Outremont a key issue that is often brought up is traffic. Many residents fear that such a huge project could risk dramatically increasing traffic as a once largely residential sector gains a heavy institutional presence.

But the prospect of this development has also raised concerns in Parc-Extension. While officially in a different borough, the overwhelmingly immigrant neighbourhood boarders the site and will likely be affected just as much as Outremont. Key amongst concerns are fears about the pressure that such a project could put on the housing market in Parc-Extension, a working class neighbourhood where housing is still relatively affordable. Urban geographers even have a term for this well-documented phenomenon: “studentification“. University students are often willing to pay a premium for proximity to campuses, pushing up rental housing prices. Moreover, businesses catering to student populations spring up and put pressure on other local businesses. Parc-Ex residents would like to see the city put in place a strategy to ensure that current residents aren’t priced out as a result of the project.

Parc-Ex residents, organised under the banner of the Parc-Extension Citizen’s Committee and the Comité d’Action de Parc-Extension (CAPE), have also decried the fact that there hasn’t been the negotiation of a community benefits agreement with the university. Such agreements  stipulate the developer’s responsibilities to the local community, and they are a tool that is increasingly being used in mega-project developments.

The city has concentrated its consultation efforts in Outremont, given that this is the territory in which the project is located. Community groups feel that not enough work has been done to include Parc-Ex residents in the project and ensure that their interests are considered in its development. A programme particulier d’urbanisme will be adopted at a further date to control development surrounding the site and in the eyes of the Tremblay administration it will be during the elaboration of this document that Park-Ex residents will be able to have their say. 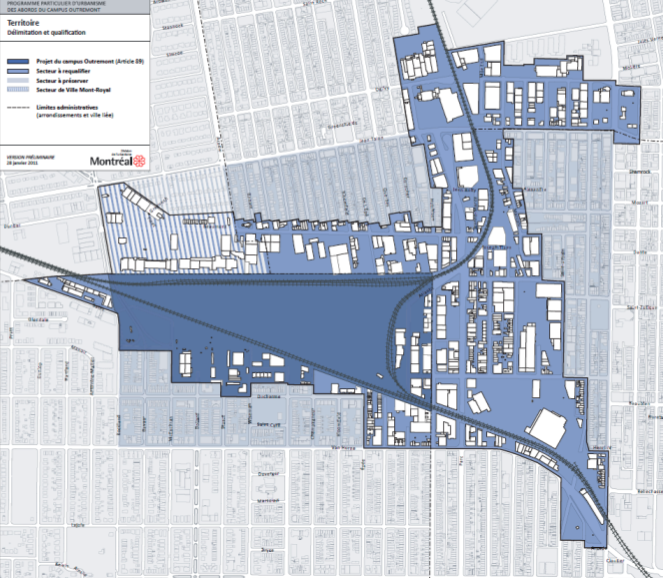 The territory that will be considered in the city’s Programme particulier d’urbanisme.

On the agenda of this week’s City Council was a motion to adopt an agreement with UdeM setting the general contours of the project. Parc-Ex residents came out in force during question period on Monday and were a vocal presence, directing pointed questions at Richard Deschamps, the Executive Committee member responsible for the dossier. They repeatedly demanded that the city push back the vote to allow for greater consultation and concertation in Parc-Ex. Many present also saw the city’s decision to approve the agreement with the University before negotiating benefits for the local community as signing away the city’s most important bargaining chip.

During debate on the motion, Projet Montréal and Vision Montréal councillors proposed that the vote be pushed back to a later date, but this was dismissed by the Union Montréal majority. And when push came to shove the opposition parties rallied to the motion, taking the position that UdeM had made significant improvements and that the project is fundamentally sound, even if more consultation in and consideration of Parc-Ex is needed. The motion thus passed unanimously. Amongst those voting in favour was Mary Deros, city councillor for Parc-Extention, who had previously told community groups that she would be abstaining in recognition of the concerns that had been raised.

While certain details remain to be determined, the vote essentially constitutes an approval in principal for the development. Council also voted to approve modifications to the city’s Master Plan to allow for the project, granting zoning and infrastructure changes necessary to move forward. The university and the city will now proceed with the next steps of the project; decontaminating the site and developing the PPU for the surrounding sector. Citizens groups plan to continue working on the issue and mobilising Parc-Ex residents around the future of their neighbourhood in the context of this mega-project.