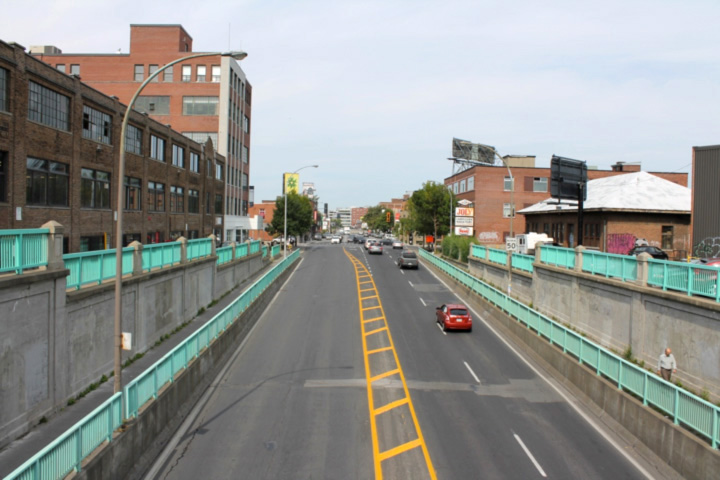 Looking north from the rail overpass between avenue Van Horne and rue Beaubien, on Park Avenue.

In the coming weeks, local residents will collaborate with urban planning professionals to identify planning issues and design interventions for the northern portion of Park Avenue (from Van Horne Avenue to Parc Metro) in a citizen-led design workshop entitled Opération avenue du Parc. On October 13th, participants will take part in guided exploratory walks of the corridor. A week later, on October 20th, they will take part in a day-long interactive workshop supported by the use of an online participatory tool called Crowdbrite.

Opération avenue du Parc has emerged in a context of significant and rapid change in the sector. The Université de Montréal’s new Campus Outremont will be developed over the next 20 years in the Outremont rail yards, just west of the Opération area. This project will bring over 10,000 students and staff to the site daily, in addition to residents of 816 housing units and 1,058 university residences, according to a plan released in 2006.

Recognizing the impact that this development will have on the four boroughs that surround the site, the Office de Consultation Publique de Montréal (OCPM) recommended that the City direct further planning attention to the area. As a result, last May, the City of Montreal began a consultative planning process for the Marconi-Alexandra, Atlantic, Beaumont, and De Castelneau sectors. The city held public discussion sessions in four locations throughout the plan area; in addition, a by-invite stakeholder workshop took place. At the end of October, the same stakeholders will meet to formulate potential actions. Ultimately, the output of the City’s planning process will be a Plan de développement urbain, économique et social (PDUES) which will be used to guide future interventions in these sectors. This Plan will be subject to an OCPM consultation process before becoming official.

It is in this context that Opération avenue du Parc has been developed, with the goals of increasing the engagement of local residents and of focusing on the particular issues along the portion of Park Avenue that passes through the PDUES area. According to Sasha Dyck, member of the Opération organising committee, resident of Park Extension and member of the Café l’Artère cooperative, organisers hope to “promote a positive vision for their neighbourhoods that [is] rooted in the residents’ realities and needs. The northern stretch of Park Avenue is an ideal site for this type of re-thinking.”

Indeed, the challenges and opportunities along this artery are many. There is a lack of green space as well as of pedestrian and cycling infrastructure, particularly around Parc Metro station and at the two railway underpasses along Park Avenue. Moreover, the City has authorised the creation of land reserves which will permit, among other things, a future access ramp between the eastern edge of the campus and Park Avenue, adding additional transportation considerations to the mix. The development of the Campus is also expected to increase the pressure for industrial building conversion and redevelopment which is already being felt in the neighbouring areas.

Workshop participants will be called to develop potential interventions to these and other planning issues. Organisers hope that the plan created by the Opération will influence the final PDUES content:

“We will end up with a detailed map that we can bring to the PDUES process . . . and hopefully it will be included in the report that ends up being considered by the OCPM. Having urban planners and residents working together should ensure that our final vision is both feasible and imaginative” said Dyck.

The Opération’s final results will be presented to the City for consideration during their second stakeholder workshop on October 29th, and will also be disseminated online using the Crowdbrite platform.

The organisers strongly encourage residents to participate. For more information, email operationaveduparc@gmail.com or visit www.facebook.com/operationaveduparc. This site will also provide a link to the online Crowdbrite platform and the results of the workshop in the coming weeks.