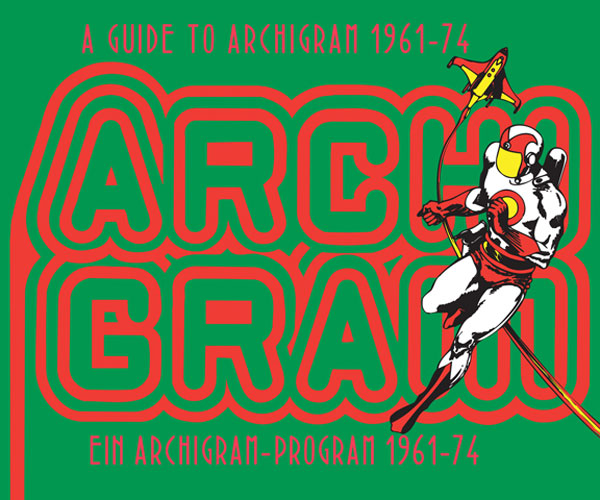 At a time when the world of architecture and design is struggling to become more dynamic and experimental, the Archigram group can sit back knowing that, forty years ago, their vision of the future was far ahead of its time. As with all science fiction literature, it is sometimes funny to look back and see a novel written about the year 2001 and all the wild and insane elements we should have designed as a species.

On the other hand, there are those odd times one reads something written a while ago that is so poignant in its vision of the future that we can plan accordingly. This was definitely my experience in reading A Guide to Archigram 1961-74 within which there were moments I found solutions to issues the design world is still looking for.

As I began to read the Guide, I was instantly pulled to thoughts of reading J.G. Ballard’s, “The Atrocity Exhibition”; fragmented pieces of work laid out in a blend of an almost conceptual mind-melt meeting pragmatic fact based storytelling. The collection is a complete grasp of all the work they produced from 1961 to 1974, in what would now be considered “zine” writing, much along the lines of Al Burian’s famous, Burn Collector series. The collections are raw and unadulterated, and speak to a movement which sparked many feelings through its time in the spotlight.

The book is broken up chronologically by year, which allows the reader to follow along with Archigram as they make revelations, chance upon new discoveries and fine tune their philosophies. The beginning of each year is preceded by the cultural zeitgeist of the era in succinct point form, allowing the reader to thoroughly understand the contextual relationship of Archigram’s work and thought process throughout the ensuing year.

Knowing, for example, that in 1969, Neil Armstrong was the first man on the moon, the 747 jumbo jet made its maiden flight and that “Monty Pythons Flying Circus” was all the rage on TV in the UK, is more than just a factual account of that year. It reminds the reader what may have fostered some of the radical decisions made, and where sparks of anger or drive for change was coming from. Even the juxtaposition of a global event, such as the moon landing next to Monty Python, speaks to the conceptual mindset of the group and where they were pulling influences from.

Throughout the book there is an overwhelming sense of modularity—pieces of buildings or the built environment which sole purpose is that of ease of movement, deconstruction, reconstruction, pliable designs which can take on multiple forms; of dynamic design—buildings, structures and ideas which conform and move to the beat of the user, keeping the human being as involved as possible—and of the breaking down of the traditional means of which we see space. Warren Chalk writes:,

More and more people want to determine their own parameters of behaviour. They want to decide how they shall behave, whether it’s playing, working, loving etc. People are less and less prepared to accept imposed rules and patterns of behaviour. Doing your own thing is important. (pg 307)

Similar sentiments are being made again today by “traditional” architecture sources, and it is beautiful – perhaps even ironic – to see it written within the an experimental architecture, underground zine, forty years ago.

The idea of dynamic design is currently a hot topic of discussion and, as I saw several of Archigram’s projects, it reignited my excitement for all opportunities out there for architects and designers within the field.

The book is in itself a cultural revolution.

Given how important drawing and representing their visions was, it was also interesting to see how their forms of representation were affected by cultural references of the time. As psychedelic drugs made their way into the mix, for example, the cross-sections, plans and axonometric drawings seem to have begun to take on a pop-art, drug-induced schematic-like look, where the lines of art and technical drawings are blurred to an almost incoherent level.

There were times where, I must admit, I had trouble figuring out just what exactly I was looking at. But that was part of the mystery of Archigram. Others may see something completely different than I, and this is dynamics in its most pure form.

From “LAWUN” to the “Electric Tomato” or even the idea of “living pods” and houses that you can carry on your back to the “Plug-in city,” A Guide to Archigram 1961-74 is chalk full of interesting directions, and is truly the foremost collection of thoughts and ideas from some of the early cultivators of the experimental architecture movement.

Every aspect of the book itself has been planned in Archigram style to fit nicely with the information in it—from its 5.7 x 4.92 inch size and styling, to the layout of the pages and the inclusion of the original covers and art of the print versions.

Although at times the ‘architecture’ of Archigram was lost through a journey of ideation and imagination—something that may frustrate those who associate architecture and design movements with more ‘tangible’ elements—the book never loses the attention of the reader….ensuring that the Archigram and the movement they inspired will never lose the original attention it garnered from the design community.