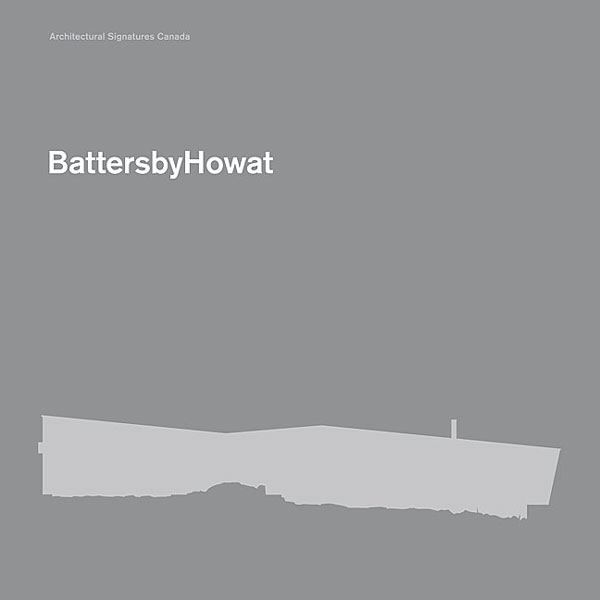 BattersbyHowat have been focused on an integrative approach to design, looking beyond the confines of architecture. This approach examines the nature of the land and the vegetation that it supports. It considers the form and thoughtful siting of buildings and the construction of both external and internal spaces. It is an approach inspired by what they see. It is an approach that, albeit especially relevant at a time when resources are limited, is difficult to detect in much of the contemporary architecture in North America.

BattersbyHowat, the latest publication form TUNS Press, is a handsome addition to this ongoing legacy of architectural monographs, and can sit comfortably in its smart, square format on your bookshelf next to other well-known TUNS books – Patkau Architects (1994), Brian MacKay-Lyons (1998), and Saucier + Perrotte (2004), to name just a few. As an exquisite study of ten selected projects by this Vancouver-based office, this latest release by the Halifax architecture school does not disappoint. Edited and introduced by series editor Brian Carter, Dalhousie University architecture dean Christine Macy and UBC architecture professor Christopher MacDonald also offer their own insights and observations on the work of this small but prodigious office.

Brian Carter introduces the book with a quote by Northrop Frye, within which he introduces the concepts of necessity and freedom, or what one has to do versus what one wants to do. This, Brian argues, is the lens through which one can truly appreciate the work of Battersby Howat: how each project demonstrates the enthusiasm in which the artifice revels in the landscape, at the same time as one is confronted with the need to take shelter from it. As Kenneth Frampton once noted, this is the beginning of a critical regionalism, and so David Battersby and Heather Howat’s body of work may takes its place in a tradition that extends from Alvar Aalto to the Patkaus.

In her introduction, Christine Macy—thesis chair for both architects—discusses each of their projects, pointing out how, in their formative years, the first shared themes between their work in school was inevitably leading to their working together. “(Their) theses reveal what they share in their approach to architecture: an analytical turn, a fascination with the performative and instrumental qualities of architecture, and a conviction that architecture can reflect and structure the full spectrum of human experience.”

Several projects are sure to be familiar to many, some having appeared in Canadian Architect, with several others having won both provincial and national awards. Examples include the impossibly cantilevering stair at the Tolmie House (2008), along with the wonderful sections and model of the unbuilt North Bend House. In all the projects, there is a consistent attention to detail at all scales, resulting in the creation of places that rest gently within their natural surroundings, with interior and exterior spaces inhabiting the site as a flow of nature rather than a containment of it.

Each project presented here is very much a discrete study of each building’s own unique site and situation, whether an inner city Vancouver street or a lone vista overlooking this province’s majestic seascape. Each is given their own unique expression through the idiosyncrasies of each client. As manifestations of material and site blended with the ephemerality of light and space, each house is executed with a respect and attention to detail, celebrating every opportunity to represent Northrop Frye’s dichotomy of necessity and freedom.

Chris MacDonald describes the pair’s work in his short essay as a search for ‘expressions of uncommon poise,’ offering his perspective on this modest but ambitious office’s 16 year history. As he explains, the detached single family home on British Columbia’s rugged coast is the perfect place to explore the typology of the house. Likewise, the houses of this firm each explore the artifice in the landscape, demonstrating how invention is still possible at the scale of the floor plan.

Of the ten projects featured in the book, one unbuilt and nine built, half are single family homes built on difficult sites – Gambier and Salt Spring Islands – with the other half in the Metro Vancouver area. As such the book presents us with several variations on the theme of the single family home, reflecting the current economic realities of the local housing market. As Chris MacDonald points out, it is not so much each individual house as it is the connections between them, the lessons learned and built upon, that is evident when the projects are set side-by-side like they are in this book:

If it is a virtue of single family house designs to provide highly focused explorations of a very particular nature, this is balanced by the inherent inability for the houses to be directly experienced by a broad audience. In offering eloquent testimony to the work, this current volume invites a larger public to imaginatively inhabit the projects.

With both the beautiful photography and meticulous drawings one would expect from a TUNS Press book, the subjects of this latest Architecture Signatures Canada book are a most formidable addition. Their success is as well sure to be an inspiration to other young design firms in the area, especially as the office rebranded itself in 2010 as BattersbyHowat Architects Inc. Well done, Heather and David!