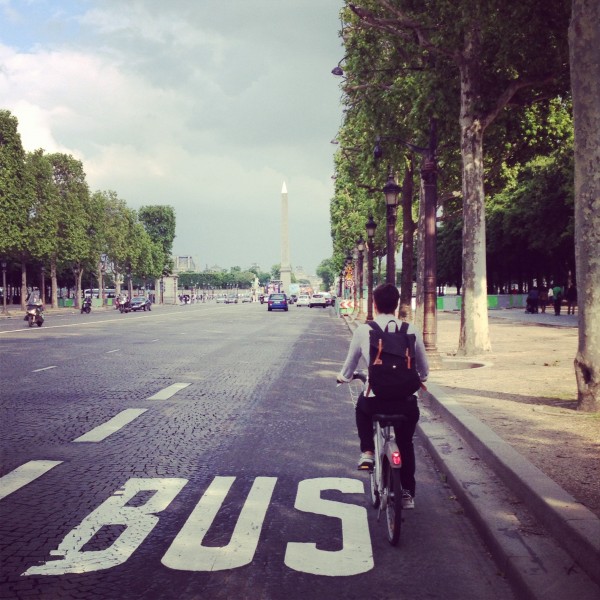 Cycling in traffic along the Champs-Élysées. photo by David Ross

This post by Mikey Bennington is part of Spacing‘s partnership with the Toronto Cycling Think and Do Tank at the University of Toronto. Find out more about the think tank, and the series, here.

Riding a bike along Parisian Streets and pathways gives the distinct feeling of being part of la Foule – that great mass of people, anonymous but unified, which mysteriously imparts an egalitarian compass to guide and order the sum of movements throughout the city. For the North American cyclist on French soil, you feel surprisingly liberated by this messy, crowded, but somehow less confrontational approach to transportation.

La Foule (the crowd), and the necessarily winding paths through its masses, perfectly conveys my own experience of visiting a city world renowned for its leadership in cycling thanks to Vélib; its extensive city-wide bike sharing program, and other progressive transportation measures.  After 8 wonderful days biking back and forth through the city’s arrondissements, I was left to wonder: how exactly did Paris achieve the feeling of integrated, non-confrontational unity in their daily travel choices. Can my home back across the pond learn something from their situation?

As a cyclist conditioned to extreme vigilance for car-danger, the streets of Paris were a welcome blend of permissiveness mixed with respectful and cautious rule bending.  There is a definite flow. Traffic ebbs towards the paths of least resistance, without ever culminating in a waterfall of excessive speeds. For that, I have to thank the traffic calming measures taken by the city. Back in 2010, Paris reduced speeds on many of the narrow circuitous streets in their dense neighborhoods to 30kph. 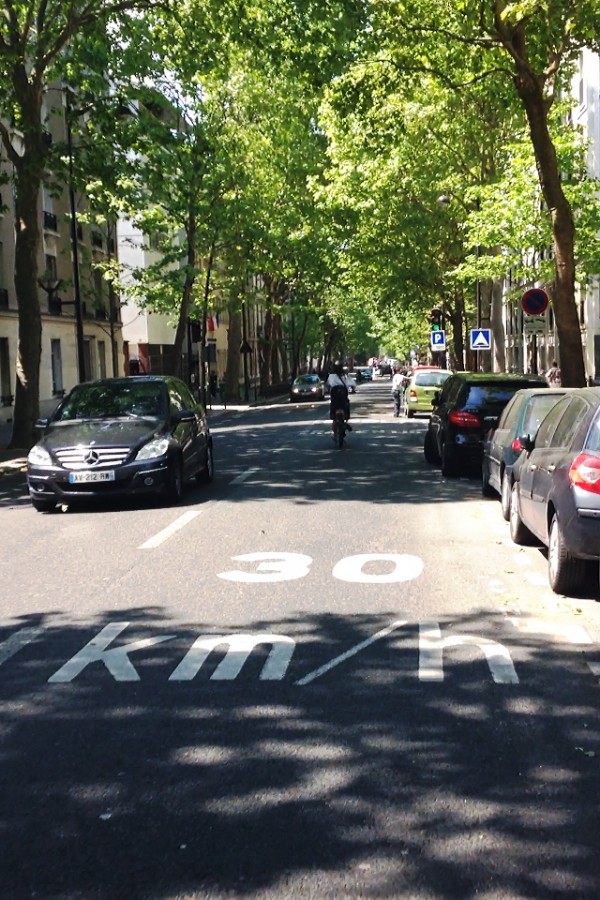 Cyclist on a traffic calmed street in the Belleville neighbourhood. photo by Mikey Bennington.

This enforced pacing creates drastically safer interactions between cars, cyclists and pedestrians. However, pointing only to rule enforcement misses an ironic and important quality of my experience in French traffic.  The French have employed these rules, but drivers and cyclist alike are not blindly rule-abiding. Cars will creep slowly, but eagerly towards you, sometimes while breaking a traffic rule. This was initially terrifying, but over my time in Paris I noticed drivers’ actions lacked the malevolence and hostility I had learned to associate with similar actions in North America. Instead, driver’s had a surprising respect for my place as part of traffic.

To North American ears, this echoes the tensions we experience with the rule bending and subsequent finger pointing that exacerbates the identity–led divisiveness in the North American car vs. bike debate. But in Paris the framework of this debate seems all together quite different. The identity politics so typical of North American cyclists and car drivers alike, just doesn’t seem as important here. Cycling is merely something people do. Bikes and cars are much less implicated in personal identity. One interesting explanation I would suggest for this very different presentation of identity is the idea of French singularity (Mona Ozouf); that grand abstract organizing principle that declares France not a nation of sub-divided special interest groups, but as an egalitarian group of individuals unified by French Culture and experience. Perhaps this French essence supersedes sub-group identity, making “us vs. them” frameworks in the transportation debate somehow less legitimate? Whatever the explanation, the absence of adversarial confrontation on its streets is palpable.

As we grow cycling participation in Canadian cities, I think we would be well served to consider Paris as a messy but important stepping-stone on the long-term road to establishing strong Canadian cycling cultures. We so often tout the “grass is greener” ideation of established European cycling cities like Amsterdam and Copenhagen with their longstanding enmeshed cycling cultures. Paris is a degree closer to us. It is still negotiating the integration of different modes of transport, and they have managed to do so while limiting divisiveness and confrontation, even while vying for limited road space. If, despite the odds, we can similarly avoid divisiveness and confrontation, we will be poised to reach our goals for cycling and transportation back home.

Mikey Bennington is a researcher with the Toronto Cycling Think & Do Tank.