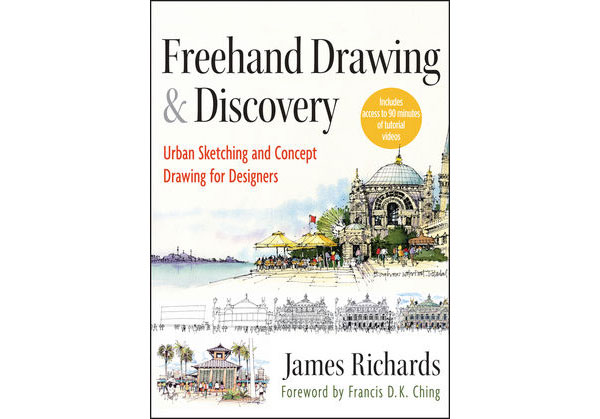 I honestly cannot recall the number of times I entered into an argument with a peer over the case of computer-based renderings versus hand drawings. When I was in my second year of Interior Design school, I would swear to no end that computer-based rendering was the faster and more accessible method of design delivery, at any scale. But as time passed and I gained more experience—more specifically when I was forced (at least at first) to sketch—I began to see things differently. I had two professors who told me that you never had to be an amazing artist as a designer, you just had to get your message across quickly and effectively….and that sometimes within this haste, the true creative process is seen as the brain and hand interact seamlessly with one another.

Freehand Drawing & Discovery: Urban Sketching and Concept Drawing for Designers is the most recent counterpoint to my initial beliefs, furthering my convictions about the importance of drawing and fostering a sense of reckless abandon to go forth and put pencil to paper. From start to finish, Freehand Drawing & Discovery masterfully achieved what it set out to: it made me want to draw again. And although not all the work in the book was created by James Richards, he always gives credit where it is due, frequently stoping to give the reader the opportunity to peer into the lives of other drawing professionals’ lives with little interviews.

The book follows a very strong and logical sequence. It is broken down into two large Parts—Learning a Language, Urban Sketching and Concept Sketching—each of which is subdivided into a series of chapters relating to its designated theme.

The first Part focuses on the fundamentals, (re)introducing the reader to why we draw, why we design, and why we bother to create in the first place (The Freehand Renaissance, Chapter 1). He then moves through the motions, outlining Nine Keys to Exploratory Drawing (Chapter 2), Elements and Entourage (Chapter 3), and Creating Believable Worlds (Chapter 4) all of which are firmly grounded in his theories on drawing and the purpose it serves in many professions.

In Part Two—aptly named Urban Sketching—he talks to the tools he uses, how to draw on the fly, and when to colour. He also shares some fun quips about his own drawing experiences around the world, and how it brought him together with some local people, enhancing his overall experience through the simple act of drawing.

Richards ends the book with Concept Sketching, that speaks to issues such as sketching over photographs as well as integrating the digital media that I have always been so fond of. As you can guess, I’m kind of a technophile, but there were techniques, apps and tools that he presented that I had never heard of and never knew existed. The use of an iPad or other tablet device to take a photograph of your intended site, for example, and draw (in realistic detail) over top of existing elements in order to see a finished (but still rough and hand drawn) example of what was to come (with annotations, layers and colour) was nothing short of brilliance. Although I knew that other people have used these methods since these technologies became available, this is the first I’ve seen it demonstrated in  a way that I felt I could attempt it myself.

At the end of the day, Richards won me over for a number of reasons, one of the most important being that, while the majority of the drawings were of exterior environments, it wasn’t focused on solely architecture, or solely landscapes, but also on the larger urban realm: an interdisciplinary drawing style.

It was because of this unbiased approach that I was able to see things in drawings I hadn’t noticed before, practice techniques I wouldn’t have thought to use, or capture things with my eyes in the world around me I may have missed without looking at scenes the way Richards lays them out. Not only does he teach you to draw a scene, he also teaches you to experience the scene in real life, and craft it on the paper, line by line.

Similarly, while he did interview architects, landscape architects, and designers within the book, he never tailored Freehand Drawing & Discovery to any one discipline, which left the content (both text and drawings) readily accessible to anybody interested in drawing.

At a time when drawing is seemingly disappearing into a forgotten skill within some of the design fields, I must thank those professors who pushed and pushed and pushed some more, to force me to enjoy drawing again. To that list, I must add James Richards, for reinvigorating that passion, to the point that the day after I was done the book, I bought two new sketchbooks for quick sketches on my way to and from work.

For more information on the book, visit the Wiley website.