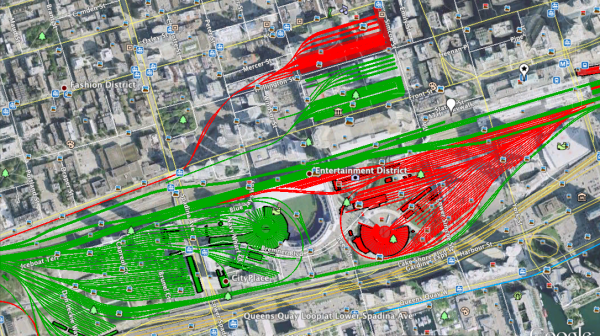 You can see the existing roundhouse (Steamwhistle Brewery, Leons, Railway Museum) and the rest of the yards and roundhouse that have disappeared.

Two weeks ago I wrote my Toronto Star column on how Toronto was shaped by the railways (as is the case with many Canadian cities and towns). They’re as powerful a force on our urban form as any landform is. You can read it here, but that column led to finding two incredible railway resources that had me crawling all around city and provincial railway maps for hours. There are two files you can download that add a layer each to Google Earth, one that plots out existing and removed railways throughout Ontario, and another that maps existing and removed electric railways across Canada (so many inter-urban lines – we could once travel great distances outside of our cities on trolly-style cars).

I found the removed railways the most fascinating as they really show how incredible our network of rails once was and where ghost traces of lines still can be found that explain how the city is laid out. It’s also a bit sad that they’re either all gone or covered in pavement or weeds. Click here to download the Ontario Railway Map Collection and click here to download the Canadian Electric Railway Collection. Below are sample screen shots (hence the low resolution) I took of the Ontario collection, mainly in Toronto and my hometown of Windsor. It’s a work in progress so don’t worry if a railway you know of isn’t here yet. I spent so much time here, I had to save the electric maps for a later exploration.

As a bonus related to the photo above, check out this incredible map just posted on the Friends of Fort York site that details the network of railways across the front of Toronto when it was very near its zenith, just as WWII was ending. Those familiar with Toronto will see (or remember themselves) that rail yards extended up to where the CBC mothership is now. Enjoy exploring it all.

Feel free to share other resources like this, of other railway collections in Canada or beyond, in the comments. 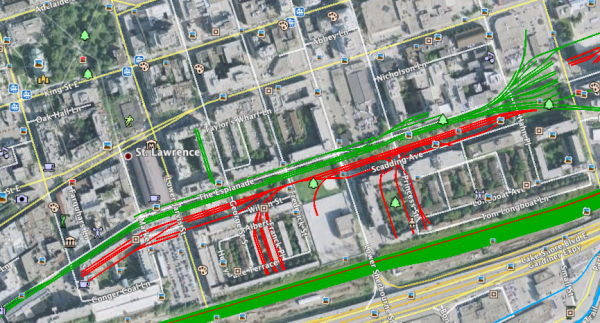 Along Toronto’s Esplanade there were once a railway tracks and spur lines to industry where the St. Lawrence neighbourhood is now. 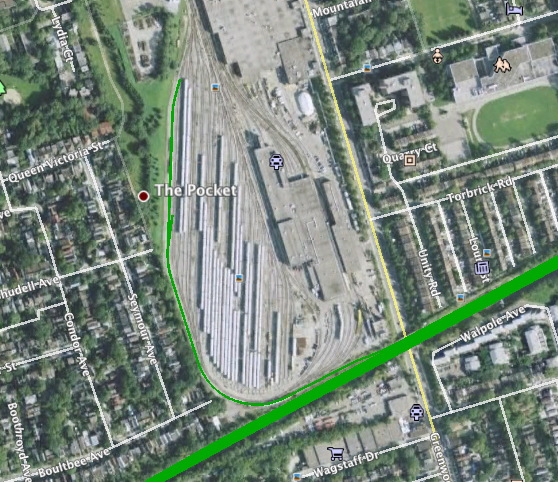 Here at the Greenwood TTC yard you can see where the railway network connects to the subway system by one spur line.

Here is the old Grand Trunk yard at Main and Danforth, now merely a stop on the Go Line. Nearby you can still find the small houses where many of the workers lived. Just a few steps to work in the morning. This roundhouse became a baseball diamond. 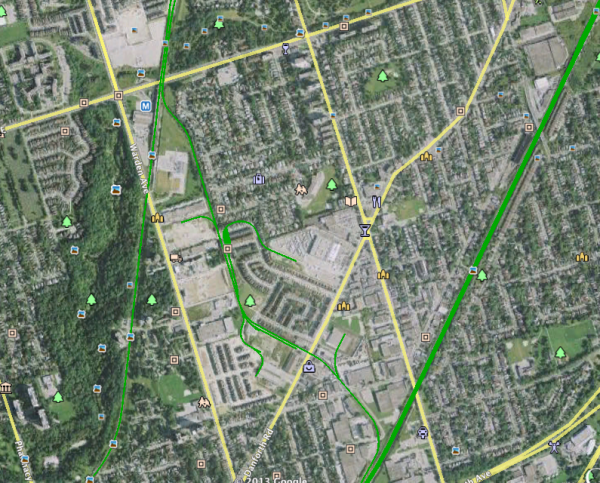 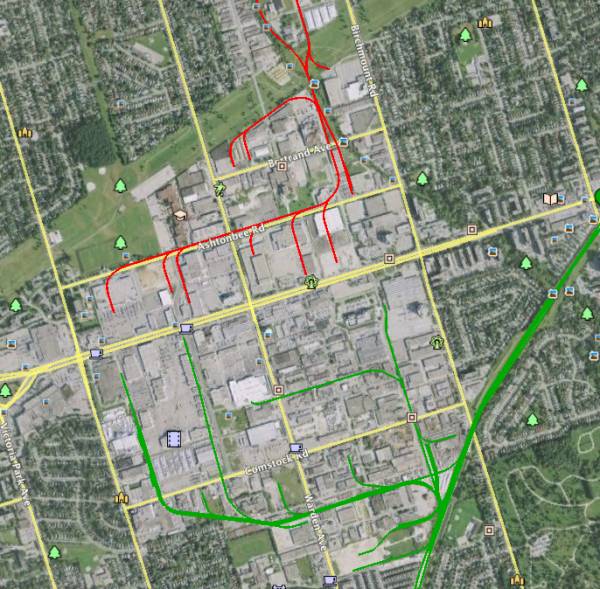 An amazing amount of railway lines served the Golden Mile section of Scarborough. 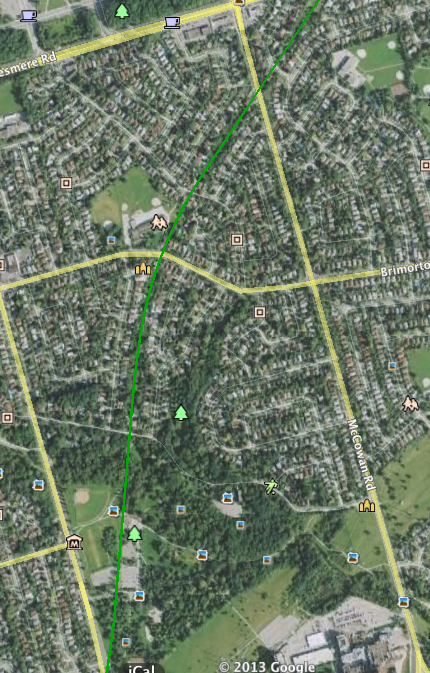 Here the old, long-gone, Northern line passes through what’s now Thomson Memorial Park. The railway embankment is now a pathway that crosses Highland Creek. It’s such a substantial earthwork it seems natural. Notice the ghost-curve of the homes above the park. 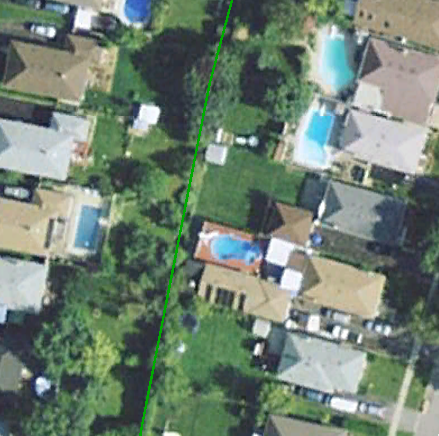 Here is a close up of the line above the park — at some point homeowners were allowed to purchase the right of way and extend their backyards, so it’s lost forever now. 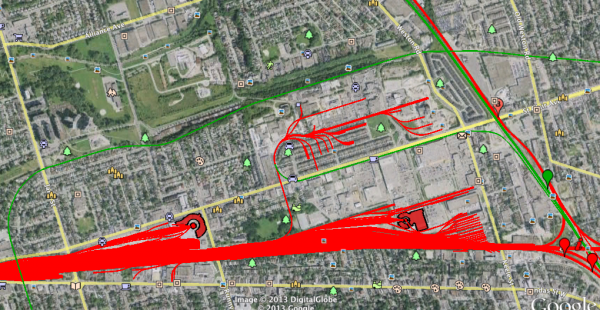 Here’s the massive yard that once existed above the Junction neighbourhood, from around Scarlett Road to Keele. Thousands worked here, and there were lines serving the nearby stockyards too. Incredible. 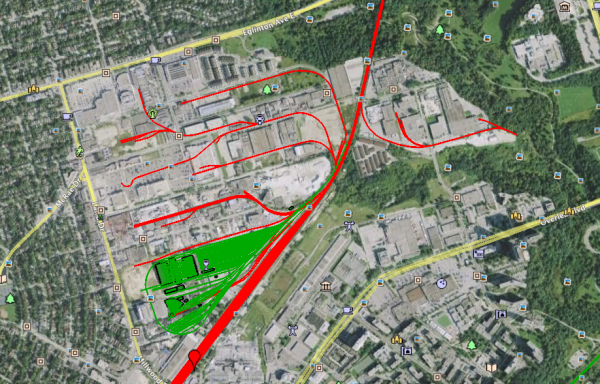 Here is Leaside. Some of these spur lines still exist, defunct, but embedded in the asphalt, unintentional memorials to the great age of Canadian infrastructure. 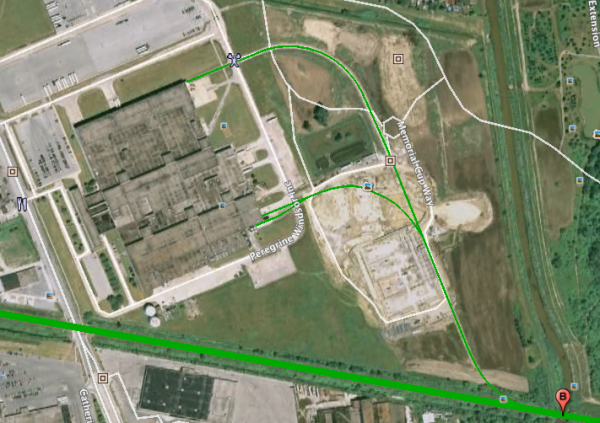 Now we head to Windsor, Ontario. This is the old General Motors plant where my mom worked, once served by two spur lines. It’s now an empty lot and GM no longer exists in Windsor.

Finally along Windsor’s waterfront, now parkland, once heavily industrial with railway lines that led to barges that carried rail cars over to Detroit. If my faintest memory serves, there were more buildings along the waterfront here (possibly to be added to the maps later) but the long green building along Riverside Drive was painted by grandfather in the mid-1960s, one of his first jobs after emigrating from Malta before he was hired at Chrysler.