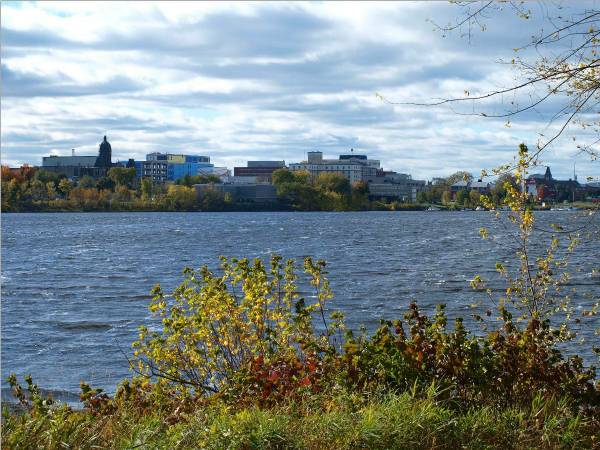 Fredericton's southside, as viewed from the northside of the river.

A version of this article by Hassan Arif appeared recently in Sustainable Cities Collective.

Fredericton is a smaller city, with a population of approximately 56,000. It is a civil service and university town with an emerging high tech sector. It is the provincial capital of the Canadian province of New Brunswick. Fredericton’s southside – south of the Saint John River which runs through the city – contains a vibrant, dense, and mixed-use downtown. Fredericton’s northside – north of the Saint John River – by contrast has a pseudo-downtown neighbourhood along Main Street. There is older building stock there, but also generic strip malls and parking lots. With the construction of new apartments and condos in the area, it is becoming an increasingly popular place to live. However, Main Street lacks the sense of being a true “main street” – of being a true community centre – with much of it having a generic strip mall feel, with the lack of walkability and street crossings, as well as vast parking lot frontage, pointing to heavy car-dependence.

Though there is the potential for a mixed-use, walkable, downtown-like neighbourhood. A key asset of Main Street is proximity to the scenic riverfront as well as to Fredericton’s trail system. There is potential for a true community centre on the northside, one that compliments the existing downtown on the southside of the river – especially if a proposed pedestrian bridge on the old Carleton Street bridge is built, more strongly linking the two sides of the river.

Fredericton’s strength is its small town appeal while having the amenities of a larger city– including two universities and a rich arts and cultural scene. Downtowns and town centres are part of this appeal, an appeal that is diminished with generic strip-mall style sprawl. 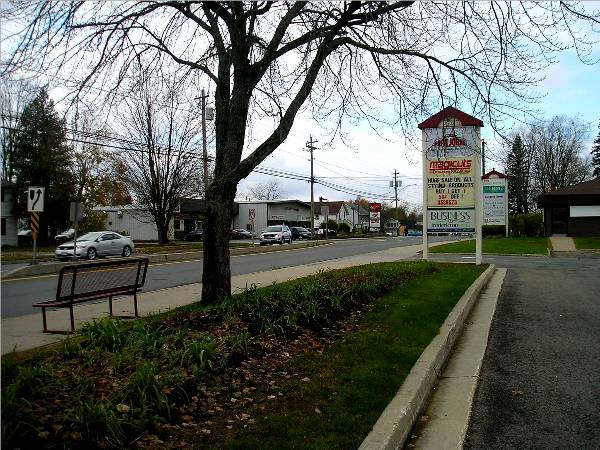 Given the benefits of downtown-like neighbourhoods, it is great that the City of Fredericton is now fulfilling the vision of its 2007 municipal plan and giving priority to revitalizing Main Street with the Main Street Urban Design Plan. The stated aims of this plan are to create an environment more amenable for pedestrians, cyclists, and public transit. Another stated priority is promotion of “ground floor retail space” – an important step in promoting a pedestrian-friendly streetscape.

Furthermore, the creation of a distinct identity for Main Street, making it a lively town centre, were cited as priorities in the plan, including promotion of public art, murals, and monuments to make Main Street a distinct place in its own right. This promotion of arts and culture – building a neighbourhood with unique features – are part of building an interesting street culture and key in attracting young professionals and entrepreneurs.

Consultations with stakeholders, and the public through questionnaires (including online questionnaires) and an open forum, have been key elements of the Main Street Urban Design Plan. A full summary of the consultation results is available here. A few highlights are provided below.

Among stakeholders and in questionnaires to the general public, themes identified included the need to move beyond car-dependence and to promote a pedestrian and bike friendly environment. Other priorities including building connections from Main Street to the river and to the trail system. As well, the importance of building a “Main Street” identity was identified, including building a more unified theme for Main Street and moving beyond the generic strip mall feel of much of the area. 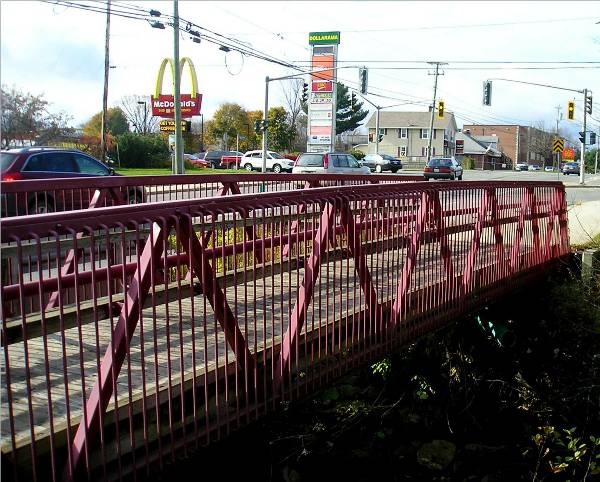 At the public forum which was held, many of these same themes were identified, including building a unique entrance to the Main Street area to foster a distinct identity. As well, a theme emphasized at the public consultations was the potential, because of “intimate scale buildings,” for a small-town “village” centre style setting.

In the report, the results of the consultations were used to inform guidelines for the Main Street plan. There is real potential for a walkable mixed-use downtown on Fredericton’s northside, one that can give a distinct identity and town centre to the city’s northside while complimenting the existing downtown on the southside of the river. Such a Main Street neighbourhood can potentially be a hub for arts and culture, be a draw for entrepreneurial start-ups, and overall enhance the small town qualities that make Fredericton a great place to live.

A lot of great ideas have been put forward, now the key is implementation.