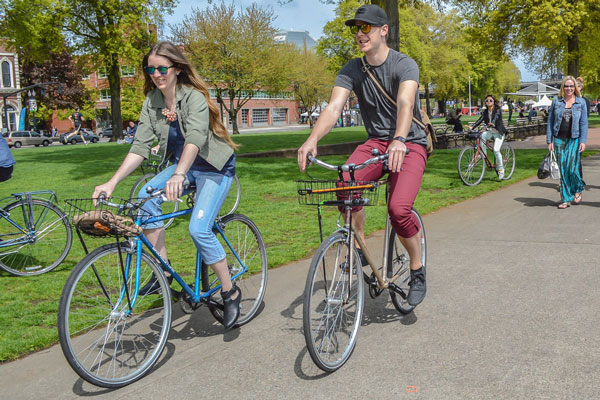 Author’s Note: I had the honour of presenting the Cycle Chic Films at Filmed by Bike in Portland over the Easter weekend. I also had an opportunity to spend some time cycling their plentiful bikeways, chatting with local advocates, and photographing their many stylish cyclists. The end result is the following photo essay: 1,600 words and 12 photos (36 in total, via Flickr) that attempt to capture the state of cycling in Portlandia in 2014, both for better and for worse. Enjoy!

[To view the full collection of photographs taken by the author, click here.]

Rumour has it there is a sign on the wall inside the Portland Bureau of Planning that declares: “We planned… And it worked!” They’re not wrong. Portland is the poster child for post-war smart growth, the result of meticulous planning and vision, which began in earnest with several key regulatory decisions made in the late 1960s. The first, initiated by a series of freeway revolts, allowed local government to reject the highway building for which federal funds had been earmarked, and redirect them into public transit, including the first section of their vaunted MAX Light Rail system.

The Oregon State government meanwhile passed its own visionary legislation in 1971. The Bicycle Bill, as it is affectionately known, still requires a minimum of 1% of all transportation spending to be allocated towards walking and cycling projects. It also necessitates the inclusion of walking and cycling facilities within the right-of-way of every single newly constructed or reconstructed road, street, or highway.

The results of these far-sighted decisions speak for themselves. While the population of the Metro region has doubled since 1966, its footprint has increased just 3%. Portlanders drive 20% fewer miles each day than their U.S. compatriots; this translates to a savings of $1.1 billion each year, of which an estimated $800 million remains in the local economy. Portland is rightly held in high regard in planning, cultural, and bicycle advocacy circles around the world. Observers’ expectations run incredibly high: can the poster-child city continue to meet them?

It’s small wonder utility cycling has thrived under such conditions. A temperate climate, combined with this prescient decision-making and compact size mean the City of Roses enjoys the highest bicycle mode share (about 6%) of any large American city (with a population over 300,000). It boasts a vast, 300-mile network of lanes, boulevards, and off-street paths, putting nearly every citizen within 3-6 blocks of a bikeway.

Perhaps the most amazing thing to consider is how so much has been accomplished for so little, other than a significant amount of political will. Officials estimate they have spent $60 million on bike infrastructure over the years: a price tag comparable to a single mile of urban freeway. Much of this has been used to retrofit the many historic bridges that cross the Willamette River, a venture that has paid rich dividends with over 18,000 daily crossings by bike – a staggering 16% of all traffic entering the city centre. And despite nearly 10 million bike trips in 2013, Portland didn’t experience a single fatality; an achievement repeated six out of the last 14 years and one unparalleled in North America.

The Importance of Quality Bike Parking

The planners at Portland’s Bureau of Transportation deserve tremendous credit for recognizing and addressing the importance of providing quality bike parking to encourage transportation cycling. All the bike lanes in the world aren’t worth a dime unless you give your residents a convenient and secure place to lock their bike when they arrive. To that end, city officials have carefully developed a two-pronged attack.

The first is an education program for developers, planners, and advocates. City hall runs a complimentary, A.I.A.-approved class every month to teach the intricacies of designing end-of-trip facilities for office towers and condominiums, which have proved incredibly popular over the years. Meanwhile, Portland State University’s Initiative for Bicycle and Pedestrian Innovation – a national leader in these modes of travel – also offers free classes to local advocates, as a way to give back to their community.

Secondly, and most prominently, planners have designed and executed a bicycle corral program that has been heralded as the best on the continent. The concept is simple: two adjacent, on-street parallel parking spots are reclaimed for bike parking, while simultaneously freeing up valuable sidewalk space. The area required for two motor vehicles is then multiplied with enough room for 20 bikes, swiftly followed by a predictable increase in visitors and economic activity. Since 2004, Portland has installed over 100 such corrals across the city, with merchants now on a two-year waitlist in order to get one installed outside of their business.

Selling Portlandia To The World

There’s no doubt these myriad successes – combined with a shrewd sense of marketing – have helped sell the Portland story to the world. Droves of tourists now flock to the experience the Portlandia they see on television: to ride its plentiful bikeways, drink its craft beer and coffee, and pillage its famous book and record shops. It is precisely those things that keep my family coming back on a yearly basis, often opting to travel car-free, and load our bicycles onto the Amtrak Cascades.

Additionally, numerous figures have emerged from this brand of Portlandian urbanism to take the triumphs and lessons of building its bicycle culture, and help export them to the rest of the world.

Mia Birk – the city’s Bicycle Program Coordinator from 1993 until 1999 – went on to found Alta Planning + Design and Alta Bicycle Share, two separate companies that design, implement, and manage bicycle infrastructure, education, and sharing projects around the world. They have grown from a staff of just three to over 100 transportation specialists, with more than two dozen offices across North America.

Elly Blue – a former managing editor for BikePortland.org – wrote an incredibly popular series of articles for Grist called Bikenomics, which she eventually expanded into a full-length book. Elly is prolific, tirelessly writing for Bicycling, Momentum, The Guardian, and her own blog, Taking The Lane. She has successfully crowd-funded 18 different (fiction and non-fiction) projects via Kickstarter, which are independently published and distributed from her home in southeast Portland.

Resting On Their Laurels

In the summer of 2012, Portland was so confident of its place in the world, that it declared itself America’s Bicycle Capital, boldly painting the phrase in 10-foot high letters on the side of a building downtown.

However, on my most recent trip to this cycling Mecca, I was told this bravado has had two adverse side affects. Firstly, it put a target on the city’s back, motivating more ambitious cities to work even harder. Secondly, it brought with it a sense of complacency; the dangerous notion that Portland had somehow reached a peak, and no more difficult decisions needed to be made. This stalemate is best represented by the strange fact that not one of their current mayor and council regularly cycle for transportation.

Before my visit, I had heard rumours that Portlanders were still debating the relative merits of protected bike lanes: this, while the rest of the world moves full steam ahead with their implementation. It was something I didn’t truly believe until I shared a photo of myself riding in a painted bike lane on social media.

Flanked by motor vehicles and frustrated my two children couldn’t comfortably come along for the ride, I pointed out that for all the hype about being “America’s Bicycle Capital”, Portland still didn’t have a single separated cycle track in their downtown core.

The tweet was met with a barrage of indignation: so-called advocates told me (and apparently my children) that protected bike lanes were an unnecessary indulgence. In their city, I was told, there is already safety in numbers, and drivers are largely passive and accommodating.

Nevertheless, the demographic I saw riding downtown certainly suggested to me that only the bold and the brave feel welcome there. Combine this with the fact that my kids were forced to walk several stretches on the sidewalk – the ultimate condemnation of any bike network – and it becomes abundantly clear, as Oregon Walks Board President Aaron Brown suggests: “There’s still work to be done to make riding a bicycle in Portland safe, convenient and accessible for folks ages eight to eighty.”

And far be it for this Vancouverite to cast the first stone, but where is Portland’s public bike-share scheme? I can understand why many – including BikePortland’s own Jonathan Maus – are wondering whether the once-innovator has lost its mojo. The phrase “resting on their laurels” was a theme repeated to me all weekend long.

The Risk of Being Overtaken

Upon returning to Canadian soil, I learned that within days of my departure, the Portland Bureau of Transportation had cancelled a proposed buffered bike lane project in a prominent central eastside neighborhood. Apparently, the uproar over the potential removal of a few dozen free on-street parking spaces was enough to cause the city to back down, and give priority on the street back to the private automobile.

People I knew from outside the city reacted in outrage and disbelief; unable to comprehend how such a decision could be made in the progressive Portlandia they thought they knew. But the Portlanders I spoke to were unsurprised by the city’s capitulation: they saw it as just another indication that – having picked all the low-hanging fruit – they were again unwilling to take things to the next level, and aim for the double-digit mode shares seen in Asia and Europe.

Sadly, Portland is indeed at risk of being overtaken by the many places they’ve inspired. As more ambitious mayors such Rahm Emanuel and Ed Murray move forward with hundreds of miles of protected lanes, there is a genuine chance they will leave “Americas Bicycle Capital” in their dust. I hope for Portland’s sake – and for my own selfish interest – they overcome this period of inertia. That one day I’ll return on the Amtrak, undock an Alta shared bicycle, and cycle a complete network of safe, protected, separated cycle tracks, with my kids in tow. Hopefully, that’s sooner rather than later.

[To view the full collection of photographs taken by the author, click here.]

Chris Bruntlett is a Residential Designer and father of two, living the (car-free) East Van dream. Outside of the office, he diligently documents the rise of mainstream bicycle culture via words, photographs, and film. He cherishes the ability to live and work in a dense, vibrant, sustainable city, and contribute to that vision on a daily basis. You can find Chris on Twitter: @cbruntlett