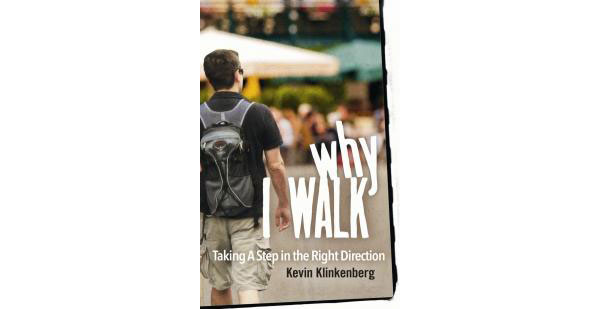 Ever since I read Jeff Speck’s Walkable City, I’ve noticed just how many books on walking there are. It’s that state of awareness similar to when one buys a new car (interesting metaphor I know). When one buys a new car, you start seeing it everywhere. It is not that there are really ‘more’ of your exact car, of course. One is just more conscious of them – perceiving what we had initially taken for granted on a daily basis. This can also be the reason, that when we start to walk more, we start to notice just how many other people out there walk, themselves.

All this to say, that once I started reading books about walking, I started noticing just how many books about walking there were. Why I Walk: Taking a Step in the Right Direction is very different though, insofar that it does not talk about how cities and infrastructure can change to improve walking public. This book is all for the individual – a self-help book if you will – about how to get up and out on your own two legs.

Absolutely nothing that Klinkenberg talks about in his book is beyond belief. He sticks to personal experience and shares why walking is more beneficial than we may notice. Along the way he points out the how’s and why’s of why some cities are better with walkability, and how our infrastructure has failed us at many points, but he doesn’t dwell here and he never sounds bitter. The book is literally filled with humor and optimism. I could imagine that Klinkenberg sat down every night to pen a little more of his short book after a brisk walk fired him up with endorphins, a feeling that was contagious and present on every page.

The book has a pretty basic structure that works: the chapters are the different motivations for walking (financial, freedom, health, and social), each with their own subcategories – quick breakdowns of ideas related to the overall chapter. Near the end of the book Klinkenberg looks at some of the downsides to walking, but then follows that with an epilogue titled “What You Can Do.”

He never leaves issues on a sour note, but also doesn’t shy away from the fact that walkability in certain cities and places in our western world can be difficult, if not downright impossible. In a funny and very direct way around this issue, he tells the reader just to move (as in pack up your belongings and go). That’s it. Don’t think about it.  Just move to a different place with a better walkability rating, as it won’t just increase your health, but lower your monthly budget, and increase your chances of reselling your house for (at worst) the same as what you paid for it, as walkable neighborhoods are statistically less likely to peak and valley in the real estate market.

Klinkenberg says this without remorse and, in a way, he is right. For whatever reason you may want to start walking more, if the infrastructure around you isn’t up for the challenge then how can you succeed? And beyond just bettering the planet, walking is something that betters ourselves, mentally and physically, which is another big point that Klinkenberg drives home.

In the end, Why I Walk: Taking a Step in the Right Direction was a simple book, and it was in this simplicity where it truly shone. It was smart, witty, and moved along at such a quick pace that I had it read in a day. I feel like I could pick it back up whenever I wanted to jump to a certain paragraph that motivated me to get up and out. I thoroughly enjoyed it and, as a final side note, had I not chosen to walk and take transit as my daily means of transportation, I would probably still be trying to find the time to finish the book and write this review. Klinkenberg would be proud.