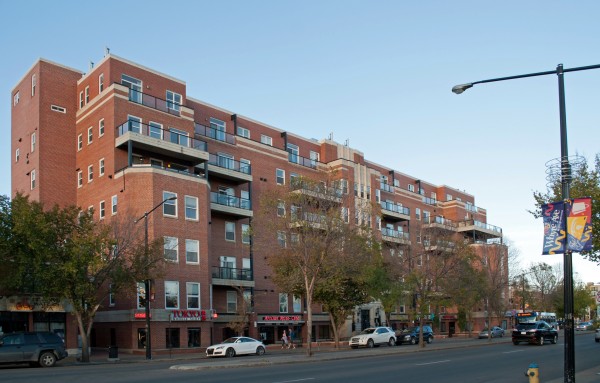 Developing cities sensitive to human needs is a vital task as the world continues to urbanize. A person cannot lead a rich, full life if the urban fabric ignores their psychological necessities. In resource-driven, rapidly developing cities such as Edmonton, the need for spatial continuity is rarely respected.

Humans situate themselves in relation to their surroundings, and the important and mundane events of a person’s life always ‘take place.’ The spaces a person inhabits slowly accumulate memories, becoming meaningful places that ground them in the world. A city that provides spatial continuity evolves slowly: buildings are typically adapted instead of demolished and physical remnants of previous eras are always present in the background. As our most permanent cultural artifacts, buildings act as a reasonably solid environment for the ephemeral activities that comprise our lives.

At a societal scale, spatial continuity allows the built fabric of a place to act as a cultural memory aid, forcibly uniting the current inhabitants of a place with those who came before. Just as a set of significant places provides an important grounding over an individual’s life, a culture is grounded and strengthened when it remains in constant dialogue with its past selves.

Contrast this with the discontinuous city, where aging buildings are perpetually demolished and new ones are constructed in the latest fashions. Inhabitants’ connection to place is destabilized: they are forced to dwell in the present moment, cut off from the city’s history and the places they once cherished. Some become alienated from their own city. As Juhani Pallasmaa notes in The Eyes of Skin: Architecture and the Senses, “we have a mental need to grasp that we are rooted in the continuity of time, and in the man-made world it is the task of architecture to facilitate this experience.”

Rapid urbanization, the economics of property development, and functionalist approaches to design have all contributed to an increasingly throw-away architecture, where new buildings rarely last more than 60 years. Architecture fails as a stabilizer when people outlive buildings.
Spatial continuity is an urban issue, but it occurs almost entirely at the architectural scale. Whether a building is adapted over time or torn down is heavily influenced by its design. As buildings age, the conditions they serve evolve, and the shelf life of a building is tied to how easily it can adapt to new requirements. An extreme example is a factory becoming vacant and requiring conversion into residential or office space to survive. A subtler example is an old apartment building remaining residential, but having to retrofit new domestic technologies such as washing machines. In both cases, the life of the building will be cut short if it can’t serve contemporary needs that it was never designed for.

A useful distinction can be drawn between monumental buildings and adaptive ones: a monumental building is designed to perfectly fit the needs of the present moment, while an adaptive one is designed to change with the times. While certain building types such as retail spaces are designed with adaptability in mind, most public and residential buildings are designed monumentally, as ‘complete works’ that are intended to remain the same indefinitely. The fact that the building will eventually require renovation is not meaningfully acknowledged in the design process.

Monumental buildings often become vacant by resisting change. Lacking the maintenance provided by active users, these buildings quickly degrade, and demolition followed by new construction becomes cheaper than repair. This is the typical scenario. Some deeply loved buildings have vocal communities that successfully rally to prevent their demolition, however these are exceptional cases.

Edmonton has a particularly terrible record for adapting its monumental buildings. The Carnegie Library, the Central Pentacostal Tabernacle, and the Bank of Montreal office were all demolished after pitifully short lives. The Healy Ford building is the next likely victim, despite having great potential for adaptation. One absurd example of this tendency is the Jasper Place Library: the first building opened in 1961, and that structure was renovated beyond recognition in 1988. Complete demolition was inevitable, and the third iteration opened in 2013. Ironically, the first design would likely be celebrated as a Modernist gem if it had survived.

There have been local success stories despite this bleak picture. Early 20th century warehouses have gained a reputation as highly adaptable, and the Great-West Saddlery building — among other nearby survivors — has been given new life through conversion. St. Joseph’s Hospital along Whyte Avenue is another excellent example, as its current identity is strongly “residential/retail,” despite the building’s original function. The sunken plaza in front is a highlight along Whyte Avenue’s streetscape, and it is representative of the rich spaces that are developed through successive renovation.

For a city to boast spatial continuity, its buildings must be stubbornly adaptive, changing with the times and securing their continued existence. Over decades and centuries buildings become composites of the societies that inhabited them, deeply affirming cultural artifacts that acknowledge the rough edges of human life. The city connects its inhabitants to a broader human story, and no one is left feeling ‘out of place.’