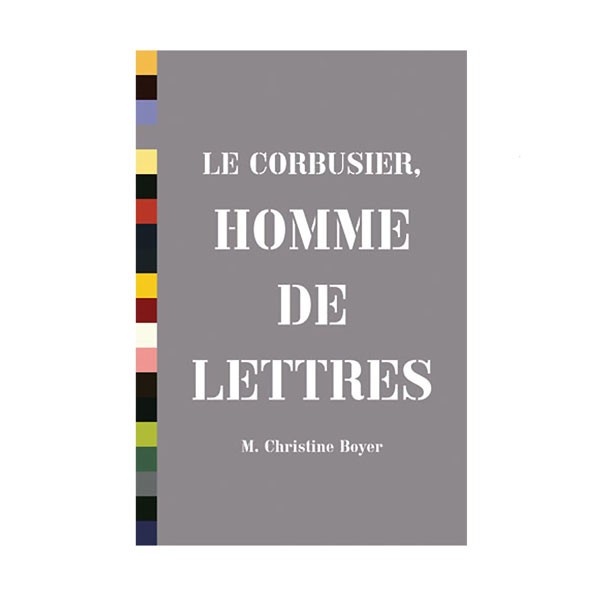 “Known for his modern architecture, numbering fewer than sixty buildings, Charles Edouard Jeanneret/Le Corbusier (1887-1965) also wrote some fifty or so books during his lifetime, hundreds of articles, and thousands of letters. His writings reveal a certain randomness of form – travelogues of beloved places visited, lectures recorded and then transcribed, projects in need of defense, catalogues of expositions, and journal articles to sway public opinion. All of his books and articles contain persuasive arguments, calling out to the reader to adopt a new set of tools and a mentality appropriate for a new machine age…” – from the first chapter

There was a time when it was feared that the printed page would do away with the need for meaning in architecture. In Victor Hugo’s Notre-Dame de Paris (1831), set in 1482 Paris, he famously exclaimed that “this will kill that”, or that Gutenberg’s printing press would kill architecture, purporting that a more literate society would no longer require the visual narrative of ecclesiastical architecture. In our time, it is then equally ironic how the art of print is about to be made redundant by the internet, and that “this will kill that” may now be applied to the paradigm shift of Gutenberg to Zuckerberg. What may be lost in this new transition remains to be seen, though we can see in the time between Quasimodo and Hugo that it led to the destruction of a number of Paris’ Gothic cathedrals.

Presently, many are asking if architectural theory is also a casualty of this, summed up in a recent Harvard Design Magazine article (‘Once Theory to Practice, Now Practice to Theory’ by Scott Johnson, HDM No.33), who noted how many architects like Gehry, Hadid, and company are in fact practicing as architectural agnostics in regards to theory. Princeton Architecture Professor M. Christine Boyer has responded with a mighty wallop, as editor of this 781 page opus – Le Corbusier: Homme de Lettres – defiantly saying, along with the Princeton Architectural Press, that architectural publications, perhaps with the exception of monographs, are not going the way of the dinosaur anytime soon. For as M. Boyer points out in her introduction, there was a time when architecture and writing were simultaneous activities.  One was the consequence of the other, and as such, Frank Lloyd Wright and Le Corbusier have produced more writing between them than has been seen on the subject ever since. Certainly the latter’s Vers une Architecture has been to young modern architects a manifesto on par with what Vitruvius’ Ten Books of Architecture would have been for budding Renaissance architects.

So, we currently find ourselves hearing a clarion call that architectural books are on the endangered species list, and perhaps M. Boyer is announcing that academics around the world should rally and revisit the writings of past masters like Le Corbusier, to keep the conversation going, whatever it may be, before all the voices go mute. The title of the book is curiously the professional designation Le Corbusier put on his French identity card in 1930 (a colour reproduction of which appears at the back of the book).  Interestingly, this ‘man of letters’ made no claim to the title of ‘architect’, being self taught and distrustful of the schools.

M. Boyer makes no secret of her own admiration for the great architect in her narrative, and most certainly in her remark that this book is but the first of two volumes to be published on the subject of his writing. With a story of his far reaching influence – in Rio even as early as 1956 – the editor has done justice to her great charge, presenting enough narrative to create a comprehensive picture of the architect and his relationship to his writings alongside the otherwise biographical nature of the letters, diaries, and travel notebooks. For make no mistake, this is an a priori treatise of Le Corbusier the ‘writer’.

With the editor analyzing his writing over a number of decades, she draws out a vital and important voice unique to each publication, one that has mostly been overlooked due to the activities of Le Corbusier the ‘architect’. Each of his greatest books, as shown by Boyer, have an evolutionary character in their respective narratives, morphing from romantic prose to a more aphoristic style. Such a ‘vision’ of detail to the design of his books is similar to that of his architectural detailing – from specifying the font and its spacing, to the binding of the book itself.

The book also speaks of Le Corbusier’s admiration for Paul Valery, a contemporary writer whose remark that books were “machines for reading” was not unlike the great master’s notion that buildings were machines for living in. It is perhaps a gross understatement to say that the twelve chapter book is extensive in its exposition of Le Corbusier’s writing over a period of forty years.

Broken into four ‘parts’, one for each decade, the first consists of his formative years while he traveled through Europe, while the second deals with his publication L’Esprit Nouveau that culminated in his seminal Vers une Architecture (1923). The third part focuses on writings and lectures during his travels in America, while the fourth part of the book finishes with his writings on Algiers.

The editor’s research has yielded a rich body of anecdotes, both personal and professional, two of which must be mentioned here. First is the letter in which the young Charles-Edouard first signed his name as ‘Le Corbusier’, a letter to his mentor William Ritter (the correspondence with whom makes up a large proportion of the book) that clearly demonstrated how one’s identity on paper, i.e. in letters, could become a cultural artifact, or modern commodity. As Boyer quotes him, “that is how one changes names without suspecting it.”

The second anecdote the editor has uncovered is a similarity of a passage on death in two books he wrote, one of which – his last book, Mise au Point (Bringing into Focus) – was finished just a month before his death in 1965. In both passages he writes of the triumph of the idea over time and mortality, that while nature will reclaim the ‘homme de lettres’, the ‘lettres’ remain, with the consequence that the editor has been able to present them here in such a way that we may glimpse a rare perspective on the inner musings of this great mind. As such, Boyer’s book is a call to arms for architectural discourse, and a reminder that architects are in the business of resolving tradition with innovation – something that Boyer’s subject fervently believes and that has, in turn, left us the fortunate benefactors of his great vision. In Boyer’s words:

“(He) was an artisan constructing a method to analyze contemporary times, calling out to the reader to use his words as tools, to think with them, to take them up again and again in the battle for modern architecture and urbanism. His words exist in order to influence later generations…”

Le Corbusier: Homme de Lettres is then a tour de force for both academics and Corb admirers alike: an invaluable addition to the massive archive already existing on the great master-builder, providing us with an erudite and sophisticated examination of the architect through his writings.