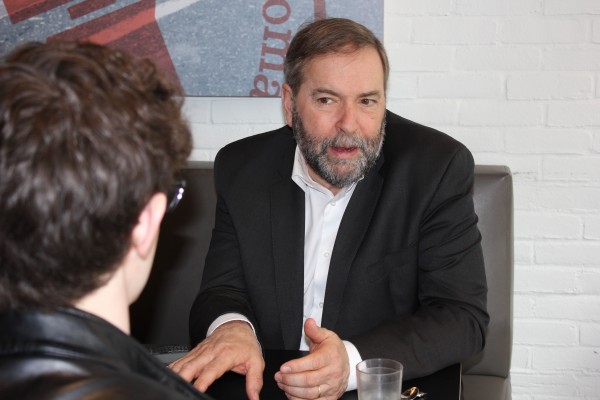 NDP Opposition Leader Thomas Mulcair is in town this week to make his pitch to Canada’s largest city.

At the Metro Toronto Convention Centre, Sunday, Mulcair seemed in full election mode, and made a host of commitments before a large group of supporters, including a $90-million annual transit funding envelope, 164,000 new affordable childcare spots, and the appointment of an Urban Affairs Minister, if elected Prime Minister.

For senior government level politicians, making commitments to Toronto has its drawbacks. To the rest of Canada, the city is seen as the centre of the universe, entitled, and the ingrate recipient of All The Things. In fact, while the city generates massive revenue for the federal government, and represents 20% of our country’s GDP, it has been choked, for years, by downloaded costs, cancelled projects, and congestion.

Mulcair thinks he has a fix.

Spacing had a chance to sit down with the Member from Outremont, minutes before his meeting with Mayor John Tory to discuss SmartTrack.

We talk transit, housing, sustainability, and the competition. Let’s get into it:

Spacing: a lot of big cities have major transit projects in mind, but Toronto is struggling to pay for the transit we have, cover operating costs, and maintain the state of good repair. Is the annual $90 million, the funding envelope you’ve talked about for transit, able to cover operating costs?

Mulcair: Absolutely. And don’t forget: $90 million is just something that we’ve already committed to, it’s very concrete. More generally, we want the federal government to be playing an active role with our largest cities to make sure that we help them, because those cities are key to the economy of the whole country. They’re absolutely crucial. We’re one of the most urbanized countries in the world. And we’ve stopped working, between the federal and provincial governments, over the past several years.

Used to be, that the federal government was involved in housing. Used to be, that the federal government would be more closely working with the provinces and territories, to help the large urban centres. That’s not the case anymore. So, one of the changes that I’ve brought in was I specifically tasked a member of parliament to be our critic in urban affairs, [MP] Matt Kellway of Beaches-East York, who’s been doing a magnificent job. We’ve also undertaken to have a minister responsible for urban affairs. We want to be a reliable, long term partner of the provinces and territories, to help in the urban setting.

Spacing: We have a serious backlog for affordable housing, the Toronto Community Housing Corporation waiting list is now over 90,000. I wonder if you have specific thoughts about how to address this.

Mulcair: First of all, we’ve got to reverse the tendency that we’re on right now with Mr. Harper, which is to let all of the funding lapse, and the programs lapse, because that’s going to be a catastrophe. A lot of that housing stock is 40 years old, and it’s in dire need of urgent repair. This is housing stock that could be around for generations to come, if we take proper care of it. But, in good North American fashion, we build the stuff, we move on, and we let it fall apart. Now that can’t happen. In a country as rich as Canada, we just don’t accept as inevitable that you don’t have decent housing for people, and there are far too many people in the Greater Toronto Area who are improperly housed, and it’s something that we would make a top priority. There’s no excuse for it.

Spacing: While a member of the National Assembly of Quebec, you spearheaded the Sustainable Development Act. With that experience, what would you bring to big cities in terms of smart growth and resilience?

Mulcair: One of the things that that legislation did, one of the provisions went so far as to amend the Quebec Charter of Rights to include the right to live in a clean environment, in respect of laws and regulations, and enhancing biodiversity. Now, what’s interesting there is, in cities, that’s given communities and groups a strong handle, and the the court cases that have built up around that are just fantastic. I had someone pull them for me about eight or ten months ago, and I was thrilled to see that, in the ten years since I brought that in, it’s built up a lovely jurisprudence, where the courts are giving effect to that. So, instead of having sustainable development as a slogan – as it often has been in the past, in the mouths of politicians – this bill, which is overarching, is the exact type of thing that we would love to bring in federally. In other words: have overarching sustainable development legislation that enumerates a series of principals like “polluter pays,” and actually giving life to them, and enforcing them, and making communities have that sort of handle that they can bring action publicly, before the courts.

Spacing: Now, the Liberals have brought in sort of a pinch hitter for urban affairs, in the person of Toronto MP Adam Vaughan. Do you have plans to go toe-to-toe? He’s a smart guy, and he knows the file.

Mulcair: Yeah, but he’s not their critic in urban affairs. We actually have a critic in urban affairs, he’s Matt Kellway. Adam Vaughan is a smart guy, but, frankly, it’s nice to be smart, but it’s even more important to be credible. And when you say that you’re opposed to [proposed anti-terror legislation] Bill C-51, but you’re going to stand up and vote for it, because you’re afraid of Stephen Harper, you’re showing that Stephen Harper’s defeated you. I stand up to Stephen Harper everyday. I take him on every day.

Spacing: Your opponents, I imagine, will say that, in order to fund some of these promises, you will either have to increase the national debt, or raise taxes.

Mulcair: Let’s take a very specific example, which is our clear undertaking to bring in quality, affordable childcare across Canada – that’s $15 a day, maximum, is how we’re defining “affordable.” Pierre Fortin, one of Canada’s most highly respected economists, was able to show, in his studies, that the Quebec [childcare] system allowed 70,000 women to go back to work – many of them were receiving different forms of support – so for every dollar that the program cost, a buck twenty-five went back into government coffers. But it was not only good for those women, it’s also was good for the economy, because the GDP in Quebec went up by the order of 2.5%, thanks to that program. So it’s not only something we could afford to do, it’s something we can’t afford not to do.

Beyond that, governing is about setting priorities. I have sat around a cabinet table, I’ve been in that position before – what you sometimes hear, when people say that, is they’re basically taking us the premise that “when we come to power we’re going to keep everything the way it was with Stephen Harper, and then anything that we would want to add would require fresh money.” This just in: I don’t share Stephen Harper’s priorities, and a lot of what he was doing, I won’t do, or I’ll do differently.

I’ll give you a specific example: he has a plan to take billions of dollars from the middle class, and give it to the richest 15%, his so-called income splitting. We’d scrap that. We’d just simply get rid of it, and we’d be very open about that during the campaign. That’s not a priority for us – to take care of the richest 15% – there’s already enough inequality in our society, we’re not going to enhance inequality. That’s, again, a specific difference between us and them, but there are a lot of other things that they’re doing that we wouldn’t do, or that we’d do differently. We would have our own priorities. That’s what governing is.

Editor’s note: the complete interview transcript has been edited for length.