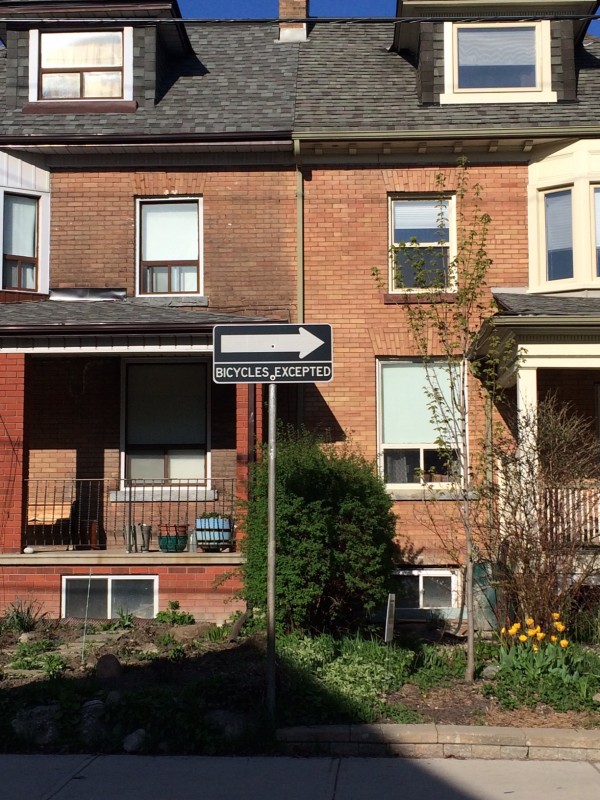 This post by Natalie Corbo is part of Spacing‘s partnership with the Toronto Cycling Think and Do Tank at the University of Toronto. Find out more about the think tank, and the series, here.

Google Maps is not the best tool for mapping out a bike route. Not only is the software an unreliable judge of what makes a good cycling street, but it also turns out that scrawling all the relevant intersections on my wrist in Sharpie is pretty confusing. And yet, in many places, trying to memorize a route from Google Maps is the best choice cyclists have for wayfinding.

Although wayfinding broadly refers to all the different ways that people navigate the space they inhabit, most wayfinding initiatives in cities are focussed on designing low-tech systems that make the city easier to navigate without a smartphone. The split-second decisions that cyclists must make are particularly well-suited to good signage, rather than reliance on an app.

There are at least two components to cycling wayfinding. One is having a legible cycling network that is both predictable and easy to navigate on it’s own. At a recent talk on Metrolinx’s new transit wayfinding initative, Applied Wayfinding founder Tim Fendley emphasized the importance of consistency and certainty to make transit, pedestrian or cycling networks accessible and inclusive. He argued that if you can improve predictability and coherence of a network, you can gain the user’s trust, which will then increase transit, pedestrian or cycling use. At the Cycling Think and Do Tank, there is an emphasis on promoting cycling among people who are new to the city and even new to the country. If you constantly get lost, or have to back track, or can’t figure out how to easily get from the Richmond cycle track to Shaw St., then it’s less likely that you will perceive cycling to be a reliable and easy way to get around.

In Toronto then, where the physical bike network can be unpredictable and has significant gaps, the other component of wayfinding is to make it easier to find these disparate routes via signage. In Vancouver, where I have lived most of my life, I can usually be certain that any time a designated cycling route ends, there will be a big, green sign pointing me in the direction of a different bike route. I also know exactly what size, style, and colour of sign to watch out for along my journey. When I moved to Toronto, despite my route-planning efforts I have on a few occasions ended up on streets that I felt so uncomfortable cycling on that I’ve walked my bike a few blocks. I’m a committed cyclist, and very little could ever discourage me from riding my bike every day. But to a new, more tentative cyclist, the uncertainty of knowing whether or not you will end up on a street you aren’t comfortable riding on may be enough to discourage you from getting on your bike in the first place.

Toronto and Vancouver have their own unique challenges in terms of network legibility. Connecting the gaps in the network is a long-term fix that will hopefully be prioritized in the future. As for signage, Vancouver doesn’t have all the answers, but they have implemented some strong ideas that could work for other cities like Toronto. One aspect of Vancouver’s design is simply following good signage guidelines: the colour and size of cycling signs is consistent across the city, and the signs are large enough to be visible and legible from a distance. Unlike the few numbered routes here, the cycling routes that cut across different streets are named to be indicative of their path or destination. For example, the “Seaside” bike signage gives a lot of information in just a single word. The street signage is also included in bike wayfinding, as each designated cycle street has a little bike next to the street name at each intersection. This is a good signifier for both cyclists and drivers, who are reminded that the road is for multiple users. Added clarity to cycle crossings at busy intersections is also both a wayfinding strategy and a part of good lane design. Beyond signage, we can also think bigger and look at lighting schemes, pavement treatments and planters as part of the wayfinding strategy.

Toronto has a very high bike mode share in some parts of the city, an embedded cycling culture, and is topographically blessed with a relatively flat road network. Along with these gifts, an effective wayfinding strategy could encourage tons of new cyclists who will support network growth, and cement an even stronger cycling culture in this city.