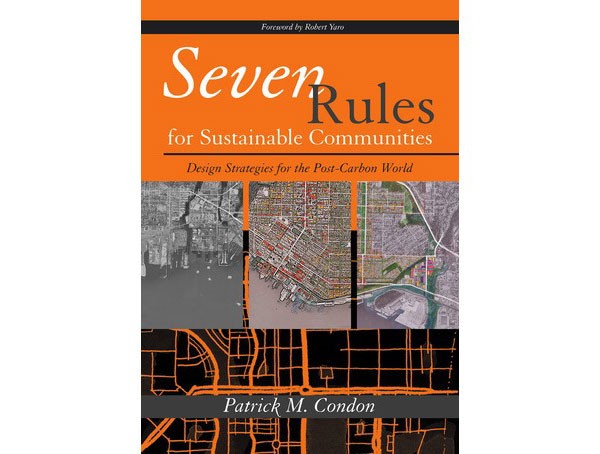 These days it has become nearly impossible to open a newspaper or read a website without encountering numerous doomsday predictions of our bleak-looking future. Seven Rules for Sustainable Communities, however, is a refreshing look the problems at hand and the solutions that are needed to fix them.  Professor Patrick Condon uses his impressive knowledge of urban planning and his years of research and teaching at the University of British Columbia to create a comprehensive set of rules that may help to secure our future on this planet. His rules are simple and realistic, and are supported by extensive data. Although the rules themselves are not new ideas, Condon’s ability to simplify and apply them to current urban design situations is impressive and inspiring.

The seven rules “represent the elements of a whole” and are described as one large solution, rather than seven smaller ones. Thus, as Condon moves through each rule, they continue to reiterate and support the previous rules: “love one rule, love them all.” He cites cities, specifically buildings and transportation, as the leading producer of GHGs, and as such, it is cities that he looks to in order to create change.

Rule one: Restore the Streetcar City: “the streetcar city form of urban development was a pattern that allowed the emerging middle class to live in a single-family homes and was sustainable at the same time.” Condon looks at cities, including Vancouver, that were previously streetcar cities and makes a strong case for the revitalization of the streetcar and “streetcar arterials,” by linking it to less VMT (vehicle miles traveled), increased ease of walking, and decreased financial burden – in terms of both infrastructure and average cost per trip.

As he points out, the pattern of streetcar culture created the “streetcar arterials” that act as the bones of Vancouver’s current city fabric. In his words: “to ignore the fundamental architecture when retrofitting our urban regions for a more sustainable future will fail.”  He also looks at existing corridors, freeways and streetcars in terms of accessibility, distance traveled, and time required to get from one destination to another as well as comparing LRTs (Light Rail Transit), streetcars, trolley buses and subways/skytrains in terms of capital and operational costs, costs per trip, and average length of trip.  In all cases, the argument for the revitalization of the streetcar seems all-too clear. Condon also notes the importance of streetcar culture, not only as a means of transportation but: “for enhancing human well-being.”

The next rule, Design for an Interconnected Street System, expands on many of the points Condon raises in the first rule, mainly: interconnected street systems makes trips as short as possible. Simple. Less travel means less cars, less carbon, and less costs. Dendritic street systems, such as what we find in suburban neighbourhoods, lead to problems of long trips – often in single occupancy vehicles – congestion and the need for large freeway systems. Despite this, dendritic street systems have been the norm in city planning and new developments since the 1950’s. Furthermore, Condon investigates the characteristics of both systems including: block sizes, parcel sizes, road widths, street corners, cul-de-sacs and laneways. He cites Portland as an ideal example of a walkable city with successful street grid proportions and links street patterns directly to GHG emissions stating that it is possible to reduce GHG production by 40% by creating a five-minute city.

Rule three: Locate Commercial Services, Frequent Transit and Schools within a Five-Minute Walk, further investigates the need for a walkable city.  Given that transportation is 40% of the problem of GHG emissions, Condon posits that we will only achieve a walkable city if walking becomes easier and more appealing than driving.  In places like Vancouver, the streetcar arterial provides a linear commercial band, which provides a “five minute” walk to most homes in the city. As such, residences in Vancouver use cars 30% less than in larger, car-oriented cities such as Surrey/Langley.

Rule four: Located good jobs close. Although changes are being made to GHG production and energy usage in terms of building and industry technology, VMT per person per day is still on the rise. This means the most achievable solution is building jobs close to homes. As such, Condon looks at solutions such as systematic policy changes and initial investments in infrastructure and job-site development, that work towards these ends.

Rule five: Provide a diversity of housing types: “Buildings generate more GHG than any other sector” (95) and, within that, residential developments are equal to 70% – 80% of developed land. These generally fall into the categories of mid-rise, high-rise, and detached. Despite the residential capacity of high-rise buildings, Condon argues that mid-rise, med-high density structures are the most efficient with their shared walls, ability to be tree-shaded, less sun exposure and less elaborate mechanical systems. He maintains that it is possible to create the “single-family home feel” through architectural solutions. He also investigates the positive affect of illegal, or secondary suites, that have been springing up in Vancouver since the 1980s.

Rule Six: Create a linked system of natural areas and parks: “The site is to the region as the cell is to the body” (111) In this chapter, or rule, Condon looks at watershed systems in terms of urban development and how they can be a tool to inform a more unified design: “Site-scale elements… do more than just influence regional environmental systems, the constitute regional environmental systems.” (111)

Rule Seven: Invest in Lighter, Greener, Cheaper, and Smarter Infrastructure. This rule looks more extensively at the relationship between our urban fabric and our watershed systems. Our current situatio, Condon explains, fights against water management and infiltration, and in turn leads to more expensive, complex situations. However, the key to successful storm-water management and infiltration can be summed up with four sub-rules: 1) Infiltrate rather than drain; 2) Infiltrate everywhere; 3) Infiltrate one inch per day; and 4) Heavy soils are good soils. (160) As mentioned above, each of the seven rules is supported by the others and together they are an integrated comprehensive guide to ensuring a healthy and happy planet for our children.

Well-written, concise, and thorough, this should not only be a required reading for students, but should be on the shelves of every planner, developer, architect, landscape architect and engineer in the city. The layout of the book makes it easy to navigate, and the impressive references that graze the inside of each page further support the extensive research that has gone into this publication. Condon should be highly-praised for his ability to take the world’s most complex problem and outline a set of realistic, and exciting solutions. As he so rightly states: “The solutions are not complex but changing behaviours, however, will be” (160)

Ellen Ziegler, b.ends, is graphic and architectural designer and a proud co-founder of studioCAMP. She likes all things fun, particularly her custom-made leather oxfords.