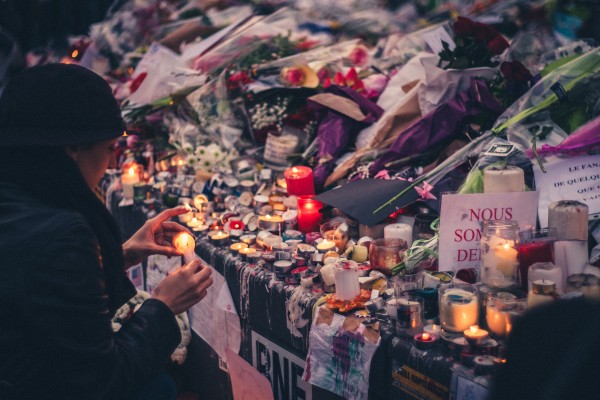 This article was co-written with Beyhan Farhadi

Immediately following the Paris attacks a deep divide emerged. On one side, there were messages of solidarity, hashtag mobilization, and temporary profile filters of the national flag; media outlets covered each detail with precision. The outpouring of grief was palpable.  The other side came down swiftly, highlighting the disparity in response to bombings in Beirut and Baghdad which took place days earlier.  At its core, the question posed was whose lives are worth mourning? Responses ranged from accusations of latent racism and shaming over the expression of selective grief, to attention hijacking, in which the struggle for social justice interrupted the sensitive process of mourning.

Those of us in the middle, observers and referees, submit to the complication of the matter by recognizing the validity of both sides. Yes, the personal is political, but it is also intensely local. We tend not to be grief-stricken over the distant or the unknown; we mourn for the familiar. And arguably, there are few places more familiar than The City of Light. This is neither to discredit the priority we give to certain bodies and places over others, nor is it to dismiss the increase in reported hate-crimes or the restriction of liberties and increased securitization enacted by the state in the heat of grief. Polarized conversations emerging from international tragedies threaten to undo critical global and local strides towards creating just, safe, and connected communities. How can we have better conversations about Paris?

Shaming is not a strategy for achieving social justice

Shaming is a tactic some use to denounce the unjust practices of governments, corporations, and high profile leaders. Although momentarily effective, it destroys the potential for trust building required for sustainable transformation. So while it is inarguable that there is a social hierarchy of places and people, shame cannot be used as an anecdote for a lack of critical thinking or empathy. Effective social change conversations are underpinned by rallying people around a shared vision. This is exhausting and sometimes frustrating work but facilitating shame-free conversations creates the conditions for achieving greater solidarity.

Broadcasting is not conversation

Social media is an excellent platform for amplifying important messages. However, it has created what social movement scholars refer to as an “attention space,” which only has room for select participants whose messages create a moral density or select critical mass. The problem with this approach is that broadcasting, while somewhat effective, is not conversation. Conversation is far more flexible and democratic. It not only tolerates, but is predicated on two-way exchange. The people on the other end of the message are granted the respect of being a participant rather than a recipient of the “message” or audience. The focal point is then placed on participants exchanging ideas rather than the purity of a single message or perspective.

It is natural to have strong feelings and positions about global tragedies. However, when engaging with others with equally strong feelings and positions, asking questions is a good way to avoid shutting down discussion. Consciously practice turning statements into questions or conclude a statement with a question. Questions force us to acknowledge the gaps in our knowledge and open us up to perspectives and angles we may not have considered. They are also a strategy for communicating strong opinions in a tactful way.

If you didn’t hear about Beirut or Baghdad before Paris, and rarely hear about global tragedies involving people who don’t look like you, it may be a good idea to expand your media sources. In addition to being a strategy for improving media literacy and cross-checking facts, this will help you to avoid getting caught in a political echo chamber. Consider subscribing to international news sources as well as humanitarian organizations like Amnesty International and Human Rights Watch. If you encounter an individual with perspectives that challenge or expand your world view, you can also add them to your feed by following their profile.

Kick it old school and actually chat with people offline

We’ve heard a million times that social media doesn’t facilitate the most transparent and respectful conversations. Between trolls and cowards more invested in controversy than meaningful connection, online platforms can be a dangerous forum for discussing international tragedies. Besides, some things are simply too complicated for Likes, Tweets, and Shares. The act of gathering on the local level is indeed revolutionary as it reinforces the power of community, relieves anxiety (this stuff is overwhelming), and enables is to encounter our mutual humanity.

Finally, we no longer live in a world where politics and religion are off the table. Conversations previously considered taboo are common place. When linked to tragedy, it is important to remember that central to all conflict-laden conversations is the existence of pain. Conversation is not meant to immediately resolve that pain or facilitate comfort (growth is inherently uncomfortable), but it should consider the ways we are mutually, albeit differently, hurting. Sometimes the hurt is immediate, such as worrying about friends and family members in a once safe urban enclave. Other times the hurt is tied to historical struggles for justice. Comparing our pain is futile and diminishes the pain of others. What’s key is having conversations inclusive of deep listening, empathy, knowledge exchange, and regard for our shared humanity.