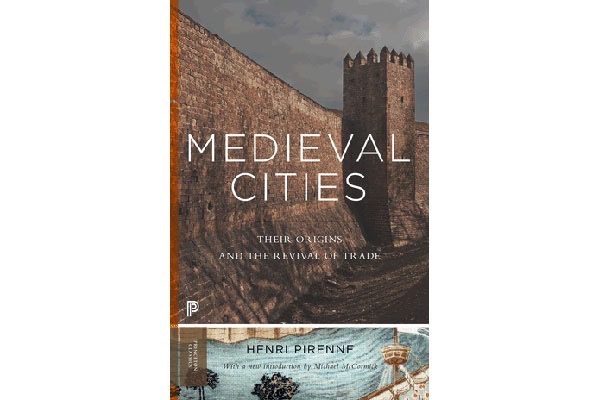 Originally published in 1925, the book is a rightfully a part of the Princeton Classics series that offers readers access to “the most important and influential books ever published by Princeton University Press”. Born in 1862, the late Henri Pirenne was a Belgian historian at Ghent University whose renown grew out of his lucid and provocative writing on European history, focused on the Middle Ages.

Passing away in his native country in 1935 at the age of 72,  he was the father of the ‘Pirenne Thesis,’ arguing that the fall of Rome was not due to the Germanic invasions—commonly believed at the time—but the rise of Islam that closed the important long-distance Mediterranean trade network in the seventh century that held the economic structure of the ancient world together. Based on a series of American lectures he gave in 1922, Medieval Cities is a wonderfully compact work that concisely summarizes the key points of his arguments and ultimately situates contemporary globalization within its deep history.

Particularly noteworthy in this most recent edition is Michael McCormick’s excellent introduction, within which the Francis Goelet Professor of Medieval History at Harvard University not only summarizes Pirenne’s historical contributions, but also expands on the research, debates and new insights that have supported and negated some of the arguments put forth by this great figure. As such, readers are given a strong, balanced framework through which to read the book, right at the outset.

This is followed by Pirenne’s succinct 150 page narrative that outlines the fall of urban antiquity and the rise of medieval cities—tracing a chronologically delivered arc that starts at the end of the third century and ends in the twelfth. The sequence and titles of Pirenne’s nine chapters straightforwardly conveys both the content of the book and the broad progression of his historical timeline: The Mediterranean, The Ninth Century, City Origins, The Revival of Commerce, The Merchant Class, The Middle Class, Municipal Institutions, and Cities and European Civilization.

As is evident in the chapter titles, over and above tying the birth of medieval cities to the growth of long-distance commerce, Pirenne connects the latter to the rise of the now-common middle class—via the proliferation of the merchant class—and the development of the city as legal districts, the rise of laws governing land, commerce and industry, as well as the birth of municipal institutions. In other words, Pirenne describes the foundation of our modern economic system.

Although clearly valuable as a book on medieval European history, Pirenne’s lucid prose make it easy for anybody to pick up and read. And given the nature of the content, I would argue that Medieval Cities: Their Origins and The Revival of Trade is not only essential for the medieval historian, but anybody—urbanists, designers and municipal officials, alike—interested in better understanding the contemporary urban landscape….with an eye on its potential futures.

For more information on Medieval Cities: Their Origins and The Revival of Trade visit the Princeton University Press website.