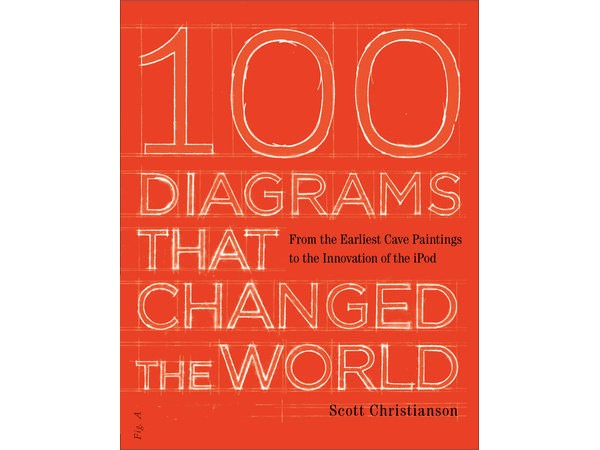 It all begins with a diagram. In architecture, it is the grand design of the floor plan; in mathematics, it is the graphic representation of an algebraic or geometric relationship; in physics, diagrams serve as the tool to aid the scientist in making enormously complex calculations. 100 Diagrams That Changed the World is a fascinating collection of the most significant plans, sketches, and illustrations that have influenced and shaped the way we think. Arranged chronologically, each diagram is accompanied by informative text that makes even the most scientific breakthroughs accessible to all.

With all the information in the world now at our fingertips, those old precursors to the smart device, otherwise known as books, are going to have to prove themselves as more than just storehouses of information, drawing out the connections between seemingly disparate ideas in a way that an internet search cannot. Such is the case here, as Scott Christianson, author of this useful Penguin anthology, has clearly attempted to do. Perhaps more a primer than an exhaustive compendium, 100 Diagrams That Changed the World is modest in its realization that there are large omissions, but indeed if there could be a framework in which such a lofty ambition could be commenced, surely this book is off on the right foot, with its heart very much in the right place.

For here as one would expect, the author has presented diagrams of the obvious – the steam engine and locomotive, the bicycle, the lightbulb, the clock, the car, the plane, the television, and the computer. But even more compelling, Christianson provides visual reproductions of the patents for each of these items, tacitly observing that Western civilization’s obsession with invention has always been closely accompanied by the notion of copyright, something the author most surely would’ve observed himself as he got the rights to reproduce these patents.

That these inventions are in this book speaks not only to their importance as milestones in the development of what we now call the modern world—many contributing to the rise of the Industrial Revolution—but that, as ideas, they were first drawings in plan, elevation, and cross-section. It is then this book’s great achievement to put them side by side with other such ideas that couldn’t be more different, such as Kepler’s Law of Planetary Motion, the Orders of Architecture, the Virtuvian Man, and a diagram of Chinese Acupuncture Points. There is a playfulness in what the author has chosen to include, as much as there is a seriousness in what he has elected to leave out.

Beginning with the Chauvet Cave Drawings from 30,000 BC (and as he points out, twice as old as the Lascaux cave paintings), the book ends with the iPod. An interesting trajectory to say the least, as it would appear that at the beginning of time we were communicating with each other (and across the ages as it would turn out), while the iPod, from a cultural standpoint, represents the polar opposite, where individual choice is focused on the present needs of the self. As expected then, much of the book is made up of modes of communication, like the cave paintings above, but also including the Phaistos Disc, the Rosetta Stone, Morse Code, the Plaque that went out with the Pioneer space probe in 1972, and the World Wide Web.

While the author is not intent on suggesting there is a moral consequence to some of these diagrams, merely by placing certain ones side by side in the book one cannot help but see the larger writing on the wall. Perhaps no better example of this is the diagram of the Brookes Slave Ship from 1788, showing African Americans stored below deck like so much human cargo, only to turn the page to see the patent for Eli Whitney’s Cotton Gin.

Perhaps the author had to decide early on to strategically edit out the darker moments of human history, and how technology and invention have occasionally been used as the vehicle for human suffering (with the darkest moment here represented by a diagram of the Chernobyl Radioactive Fallout Map). Such is the case with one of the book’s opening diagrams for the battering ram, a testament of humanity’s long obsession with warfare as first documented by the Assyrians in 865 BC, and later in the book with the inclusion of the patents for the machine gun and V2 rocket.

There is, however, just as much light as there is dark in human invention, with moments of sheer whimsy here including instructions for building a piece of IKEA furniture, the first documented sheet music dating back to 1400 BC , and Micrographia – incredibly detailed 17th century drawings of the world as seen through a microscope.

Moments that saw tectonic paradigm shifts are also here, including the Ptolemaic diagram of the solar system from 150 AD, along with Copernicus’ Heliocentric Universe from 1543. Galileo’s diagram for the first telescope is here, along with his magnificent drawings of the moon which were made possible by what he was able to see peering through his invention. In addition, the Pythagorean Theorem appears in the book’s opening pages, though Christianson points out that the diagram may be much older than the ancient Greek philosopher and mathematician for whom it is named, with historic evidence suggesting that it was actually first used by the Babylonians in 1900 BC.

There are understandably here many diagrams concerned with humankind’s place in the cosmos, represented by the Egyptian book of the Dead, Dante’s Divine Comedy, the Aztec Calendar, and even Freud’s notions of the Id, Ego and Super Ego.

As has been often the case for human history, there have been revolutionary ideas that have occurred quietly behind the scenes, falling into place with such ease in our understanding of the world that we are often hard pressed to imagine our world without them. These notions include the periodic table of elements, colour theory, Darwin’s theory of evolution, the discovery of bacteria, and even graded sewing patterns. All seem rather unremarkable at first glance, but upon further reflection they are as important to our modern world as the more usual suspects noted above.

A most thoroughly satisfying read, as well as an indispensable addition to one’s library, 100 Diagrams That Changed the World is meant to be read and reread – an invaluable resource of understanding our world and how human volition has rendered it through simple line diagrams. While such notable absences from the book include the Chinese Abacus, the Arabic number zero and the Roman alphabet, Christianson’s anthology represents a thoughtful cross-section of human endeavour dating back to a time before the first cities appeared on the Tigris and Euphrates rivers.