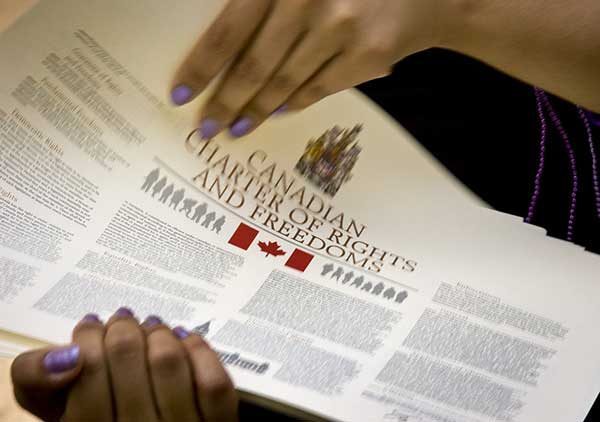 According to the courts, there is no constitutional “right to housing” in Canada –at least not yet. This may be changing, however slowly, due to the direct citizen action and litigation challenging this standard interpretation of the Charter of Rights and Freedoms. Here, I review some background and recent cases pointing in a hopeful direction.

Canada is a signatory to two major international declarations asserting the right to housing. Interestingly, a right to housing is constitutionally entrenched in South Africa and also provided for in law, in Scotland and France. Yet, in Canada, the court has consistently found there is no Charter right to housing. This was most recently re-affirmed in the BC Supreme Court injunction ordering the “tent city” on the Victoria, B.C. Court grounds be dismantled.

The reason that there is no constitutionally entrenched right to housing in Canada is that the Charter established general categories of rights, as opposed to specific entitlements. By and large, these have been interpreted to provide Canadians with negative rights (i.e. freedom from government actions that interfere with rights) rather than positive rights (an obligation of government to provide services, such as housing).

Citizen entitlements to particular services have usually been left up to the political and not the judicial systems. But, for reasons too lengthy to go into here, the possibility of positive rights in Canada has not been completely shut down by the courts. The right to housing would be one such positive right. Others could include a right to a clean environment, a right to post-secondary education, and so on.

The argument that the Charter should (or must) be read as including a right to housing is found in section 7 which protects “life, liberty and security of the person.” A lack of appropriate housing may engage each of these rights. In addition, section 15 of the Charter protects equality rights and precludes discrimination, on various enumerated grounds to which discrimination against persons without homes may be argued to be comparable. Recent court cases on the right to housing (particularly regarding person without homes) have been fought on both relevant sections of the Charter.

In 2015, a municipal bylaw in Abbotsford, B.C. prohibiting homeless persons from establishing temporary shelters in city parks was found to be a violation of section 7 of the Charter because the prohibition impeded “rights of liberty and security of the person.” It was also inconsistent with the principles of fundamental justice and not a reasonable limit on individual rights. This ruling was significant. For example, Pivot Legal Society heralded this ruling as a “landmark decision” and as “a new high-water mark in advancing the shelter rights of people who are most marginalized by our faltering housing system.”[1] Although the decision did not establish a “right to housing” in Canada, it did establish that homeless persons have a right to erect, with some limitations, temporary shelter in public spaces, in order to provide for their own security of the person.

In Victoria, B.C., a 2009 decision regarding the right of homeless persons to establish temporary shelter in municipal parks also found that the municipal bylaw prohibiting the erection of temporary shelter by persons without homes was a violation of the Charter, to the extent that there were no viable housing alternatives available. The implication is that the provision of housing alternatives (shelter beds) might remedy the unconstitutionality of the application of the bylaw. A positive action of the state could possibly correct a negative rights Charter infraction.

Most recently, in Victoria, a group of homeless persons set up “camp” on the Provincial Courthouse grounds. The space is provincial and not municipal property, and therefore not subject to municipal by-laws. The province initially sought an injunction against the “camp” largely for public safety reasons.

Initially, this injunction was denied by the court in part because the residents “simply have nowhere to move to.” However, in July of this year, the Province again applied for an injunction citing elevated public safety concerns but, this time, agreeing to provide immediate shelter space for all residents. The injunction was granted and the residents of the encampment were ordered to vacate “as soon as the housing being made available by the Province is available.” This case awaits full trial.

From these BC decisions, Charter protections of “life liberty and security of the person” are apparently violated by municipalities seeking to prohibit homeless persons from erecting temporary (overnight) shelter on some forms of municipal property where there is no viable housing alternative. In addition, the same would appear to be true of Provincial governments attempting to limit homeless encampments on some categories of provincial lands, although the most recent case in Victoria still awaits full trial. This was initially set for September 7, 2016 but has not proceeded.

A broader test of the right to housing itself is found in a 2014 case in Toronto, where the issue was dealt with head-on. Here, it was argued that changes to social assistance programs and a reduction in government involvement in social housing as well as Canada’s failure to live up to international obligations regarding domestic homelessness constituted Charter violations.

The remedy sought was, among other things, a court order to the Ontario and Federal governments to implement strategies “eliminating homelessness and inadequate housing.” The case was dismissed in the lower courts but on appeal, a minority opinion by one Justice offered that “the issue of both the existence and extent of positive obligations under the Charter to give effect to social and economic rights” remains an open question. The Supreme Court of Canada refused leave to appeal the case further.

In the end, while it is clear there is no specific Charter right upholding the positive right to housing, recent cases suggest that progress is possible (and being made) through advocacy, direct action, and litigation. The most recent case in Victoria evidently awaits full trial but, understandably, the Province may be reticent to proceed.  The injunction resulted in the encampment being dismantled – which was the immediate aim. A court ruling that the Province (or another body) establish sufficient shelter spaces for all who desire them (if the right of homeless persons to set up temporary shelters on public lands is to be limited) is possible.  Such a decision would be in favour of low, or no, threshold shelter spaces and be close to establishing a positive right to housing — at least in effect.  Such a decision, though not a certainty in the recent Victoria case, would establish a precedent which the Province may not be prepared for.  On the other hand, it would be celebrated by many advocacy groups as another decision on the path to a fully recognized constitutional right to housing.

The struggle for a “right to housing” is far from over, despite pronouncements that the Charter does not contain such a right. Indeed, the Charter may well evolve to provide, not only a right to housing, but other positive rights as well and someday—perhaps, become as much of a social Charter as it is an individual rights instrument.

Scott McAlpine is an independent researcher and consultant focussing on strategy, NGO’s, and post-secondary education. Formerly the President of Douglas College, Scott holds a Ph.D. in political science and is completing his LLM at Osgoode Hall in Constitutional Law. His website and links to other publications by Scott is http://scottmcalpine.net.