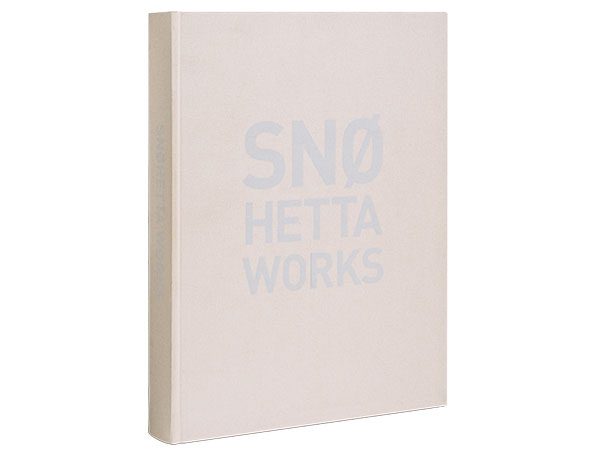 These projects and descriptions together have been selected to show the wide range, at times informal directions, and sheer energy of some of Snøhetta’s influential designs for architecture, landscape, and interiors during the past two decades.

– from the foreword to Snøhetta Works

There are moments in history when architecture and human tragedy have become suddenly intertwined, violently bringing to the fore the relationship between us and architecture that we often take for granted. The fire of the great library in ancient Alexandria is an event not unlike the collapse of the twin towers, the devastation in lives lost, with cultural, commercial, and personal casualties, all due to the razing of an iconic monument.  Whether the storehouse of thousands of volumes of ancient literature or thousands of stock exchange workers’ offices, the significance of both are one and the same and history is filled with many such moments.

It is not without this sense of solemnity that Snøhetta, subject of this new monograph of the same name by Lars Müller Publishers (2009), presents these Norwegian architects’ response to a UN sponsored proposition to build a library in Alexandria – a project which remains to this day the firm’s largest commission. Awarded first prize from 500 entries for their scheme in 1989, the celebration of the building’s opening in October of 2001 was indefinitely postponed, and to this day few from the west have made the pilgrimage to visit the building, at least not in the numbers that the UN and UNESCO perhaps had hoped would have travelled there (Herodotus would’ve reminded us of Icarus’ folly).

And so it is in an understandably muted tone that Snøhetta: Works presents this office’s work, as made manifest through the descriptions of ten of their larger projects, with briefer descriptions of 78 more, all rounded out with three essays on the firm penned by local architectural critics. Bound in a snow-coloured fabric cover, the title of the book appears and vanishes from its surface, a clever design representative of the content within, the combination of the book’s tactility and invisibility make it a curious pleasure to open and reopen as one peruses the clever content.

Named after the tallest mountain in Norway’s Dovre region – that, and their first design studio was over a beer hall called ‘Dovre Hall’ – Snøhetta is a design collaboration between Oslo-based architects and landscape architects that gelled in 1989 for the purpose of entering the Alexandria Library design competition. Since then, the office has grown such that in 2006 they had eighty members of the firm working out of offices in Oslo and New York with their body of work in the past two decades numbering now over 800 projects – including the new magnificent Norwegian Opera and Ballet, as well the already mentioned Alexandria Library.

But as the editor points out in the book’s foreword, their buildings are quiet studies of built form and landscape, never flashy or brash, and often at their best the simpler the program, such as the Petter Daas Museum in Alstahaug and Karmøy Fishing Museum. Both create a long axial procession from the exterior landscape to the museum interior, culminating in a massive window at the path’s end, reconnecting the visitor to the landscape from the museum’s interior. Their monolithic material expression, certainly in their larger projects, is achieved with monumental austerity, like the slowness of a glacier, as in the use of 20,000 square meters of Carrara marble at the Norwegian Opera and Ballet.

And similar to our current Olympic building frenzy, Lillehammer hosted the Winter Games in 1994, for which Snøhetta built a new 2,700 square metre Art Museum. Other projects include a much sought Serpentine Pavilion in London’s Hyde Park, as well as a performing arts centre at Queen’s University in Kingston, Ontario. More recently, or at least before the bubble burst, a project in the UAE inspired forms for residential towers emulating the sand dunes.

But undoubtedly it is their 9/11 Memorial Museum that will prove to be one of their most important if not challenging projects to date. Though disappointing as its larger plan has been, like many other buildings on the WTC site, shrunken down in size, reducing the museum to a ceremonial space below ground (where one can see the original slurry wall – the only thing left from original designer Daniel Libeskind’s vision), their scheme will at long last return a sense of place to this gaping wound in the city, a state it has been in for far too long.

As for the essays, the book’s editors have assembled a trio of architecture critics, two Norwegian, one Dutch. Of the Norwegians, Thure Erik Lund is a carpenter as well as a writer, while Ingerid Helsing Almaas is both author and editor, with the architect from Amsterdam, Bart Lootsma, a chair of architectural theory at the University of Innsbruck. All three offer their own unique perspective on Snøhetta and the firm’s place in contemporary architectural culture.

Snøhetta Works is an austere collection of new and exciting architecture, as presented by an office that has weathered modern tragedies to realize this impressive body of work.

This article was originally published in late 2009. For more information on Snøhetta: Works, visit the Lars Muller website.