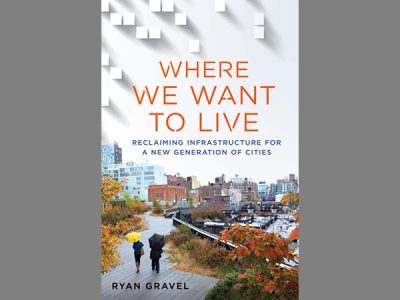 It is not often that a graduate school project turns into a best selling book, let alone a transformative infrastructure projects that is reshaping a large North American city. Yet, that is exactly what happened to Ryan Gravel when he envisioned a streetcar loop inside the Atlanta city limits connecting four separate railroad lines while researching his master thesis, in the late 1990s. What is now known as the Atlanta BeltLine project is connecting 40 diverse Atlanta neighborhoods to city schools, shopping districts, and public parks that are reenergizing communities across the city.

Where We Want to Live is part memoir, part argument against suburban sprawl, and part exposition on how about infrastructure can shape (and reshape) our communities.  In the book, Gravel explains how the BeltLine project emerged from the pages of an academic report into a large scale urban regeneration initiative, through grassroots efforts that he helped inspire.

“What if infrastructure was viewed not as something over-budget and/or in need of repair but as a conduit to creating better, more livable cities?” 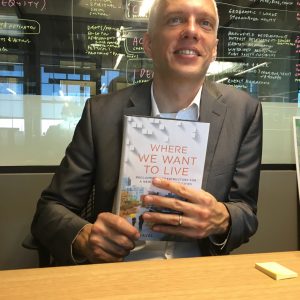 The BeltLine project emerged from Gavel’s observations that auto-oriented sprawl “is undermining the very set of social constructs that America was founded on.” Indeed, after six decades of suburban development, many North American cities struggle with issues related to traffic, divided neighbourhoods, and a car-centric life.  Gravel believes that this doesn’t have to be the case.  Drawing on his background as a civil engineer and architect, he espouses how cities have the capacity to create a healthier, more satisfying way of life by remodelling and augmenting their infrastructure in ways that connect neighbourhoods and communities.

On the surface, the book provides a history of Gravel’s involvement in brings the BeltLine project from an academic thesis to a practical reality. As such, it spends significant time discussion regional and neighbourhood dynamics and politics that those of us from outside the city may have a difficult time following.

Nevertheless, his experiences provide transferable lessons to anybody involved in community development and local politics. The larger lesson of the book is how re-inventing old infrastructure can help to remake our cities into greener, more walkable, more intelligently developed places where—as the title says—we actually want to live. Indeed, similar projects are in the works around the United States and Canada including Los Angeles’ River Revitalization, Miami’s Underline, and closer to home, Vancouver’s Arbutus Greenway.

While the BeltLine project has traveled a bumpy road, including Gravel resigning from the BeltLine Partnership Board, Where We Want to Live—and the project itself—has enduring lessons for anybody interested in creating livable places.

For more information on the book, visit the Ryan Gravel’s website.

Yuri Artibise is a community engagement and communications specialist with a passion for urban planning, public participation and digital cultivation. . Through his Yurbanism brand, he explores the ‘Y’ of urbanism by sharing ways to make our cities more livable, community-oriented places one block at a time. He currently works with SFU Public Square as their External Projects and Communications Manager and is an elected director of the Co-operative Housing Federation of British Columbia.