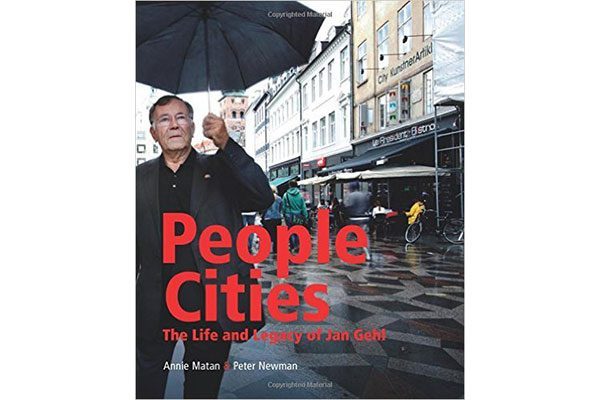 Over the last 50 years, Jan Gehl has changed the way we think about architecture and city planning, helping cities reclaim their public space for people. People Cities: The Life and Legacy of Jan Gehl celebrates and chronicles Jan’s career, telling the inside story of how his study of urban spaces evolved and began to implement his people-centered approach.

To those of us working in the world of architecture and urban design, the name of Jan Gehl is synonymous with responsible and thoughtful city building. His book Life Between Buildings is, along with Janes Jacobs’ Death and Life of Great American Cities, one of the most important treatises on living in the modern city, and is most certainly common knowledge to many of our Spacing readers. Visiting our city back in 2011, then speaking to a full crowd at the Vancouver Playhouse, it was clear that Jan had captured the zeitgeist of the moment.

It should come then as no surprise that Jan has been received in a similar fashion in other parts of the world, as is the case here with People Cities: The Life and Legacy of Jan Gehl, being written by two professors from Perth, Australia. Through their lens, these two capture how Jan’s legacy has had a profound impact on development in both Australia and New Zealand, from Sydney and Melbourne to Perth and Christchurch.

The main narrative of the book is not surprisingly about Jan himself, his life and work, interspersed with testimonials from Australian architects, civic planners, and educators. The common thread is his methodology for creating livable spaces in cities, which he first applied to his home town of Copenhagen in his early career, before taking it to the rest of the world—including such far reaching places as Amman and Moscow, along with such usual suspects as London and New York.

After an introductory chapter by the books’ authors, we are given a brief biography of Jan, from his early childhood to his first work as an architect, restoring eleventh and twelfth century churches in Denmark. The book also recounts how, after marrying his wife Ingrid in 1961, the two of them had the opportunity of a lifetime to go to Dephi, with eight other students and architects from the Copenhagen School of Architecture, to survey the entire sanctuary precinct.

In 1965, again on a scholarship, Jan and Ingrid traveled to Italy to study the use of public spaces and everyday public life in four cities, including Rome. This fascination with the Mediterranean way of life would certainly prove to be a big influence on Jan, as both Greece and Italy would reveal themselves to him as richly variegated tapestries of human interaction in their narrow streets, markets, and expansive civic piazzas.

It was shortly after this time that Jan had the opportunity to teach and conduct research, the outcome of which would become his first book Life Between Buildings (1971). And it is this which is the subject of the book’s third chapter, entitled ‘Spreading the Word.’ Beginning with a reproduction of a letter typed and signed by Jane Jacobs – the first communication between herself and Jan – is a marvellous addition to the book. That the two had been pursuing and advocating for the same subject was not only a coincidence, but cemented the notion that social justice is a crusade that has many supporters, often unknown to each other.

In the book’s next chapter, ‘Copenhagen as Laboratory’, we see Jan put his words into practice, the outcome of which has been the creation of one of the most sustainable and resilient cities in the world, whose cycling infrastructure alone is second to none. The removal of the car from the downtown shopping precinct, still found to be antithetical to good urban design in North America, has long been enshrined as de rigeur urban policy in European cities. Jan would have been largely impacted by the Copenhagen’s city council’s forward thinking decision to close the city’s main street to cars in 1956. By 2006, all 18 civic squares in the city had been converted back to public squares closed to traffic, something Jan very much had a part in realizing.

The next chapter presents all of Jan’s books, from the already mentioned Life Between Buildings to the more recent Cities for People (2010), which was also the book Jan was promoting when he spoke in Vancouver five years ago. But it is the book’s next chapter, called ‘Changing Cities’ which is the true heart of the book. In its opening pages, the figure ground plans of twenty cities Jan has worked on are presented, with the rest of the chapter going into the fineries of the analysis Jan’s office did of Melbourne, London, Amman, Sydney, New York (including a testimonial by Janette Sadik-Khan), Moscow, and Perth in Western Australia.

With an introductory foreword by Enrique Penalosa, the mayor of Bogota, who recalls his good fortune to meet Jan due to his daughter moving there to work for an NGO, and how his ideas would have a profound influence on him and consequently Bogota. Similarly, the book closes with a remarkable story by Tom Nielsen, a professor of planning at the School of Architecture in Aarhus, Denmark. He recalls Jan speaking to a near empty auditorium at the university in 1995 before his ideas had taken hold there, contrasting it with ten years later when he saw him speak again, this time in Sydney, Australia where he held the rapt attention of some 1,000 ‘Sydonians.’

People Cities: The Life and Legacy of Jan Gehl is a thoughtful compendium of Jan’s remarkable vision as seen from both Down Under and abroad, and is an invaluable reference on his urban planning methodology, one which may fittingly take its place among the books by Jan himself.

For more information on People Cities: The Life and Legacy of Jan Gehl go to the Island Press website.