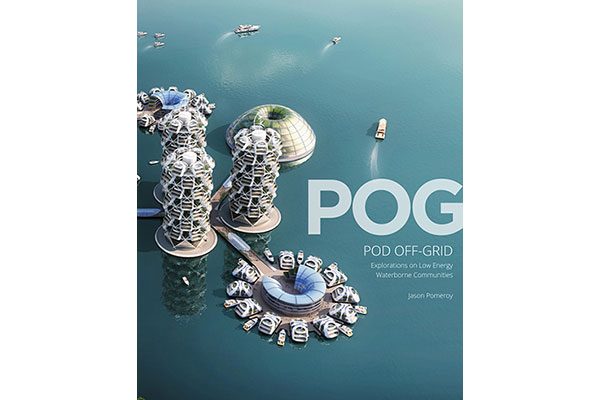 When people hear about the oceans rising due to climate change, their response is usually to shrug it off because it isn’t something that is immediately visible. But over time, our waterfronts are changing, and there has been a scramble recently to figure out how major cities will deal with rising water. POG: Pod Off-Grid: Explorations of Zero-Carbon Waterborne Communities looks at the very plausible idea that we will need to build cities that can sit on top of, and move with, our waterways as changes occur. The other reality of water-based living is that it could open an entire frontier of new places to create cities, and as our population grows, the question becomes why not use the open water to house and shelter people in a sustainable way?

The book is broken into five chapters, following a timeline approach of a brief history of where we are in terms of climate change, what we’ve started to do, and what lies on the horizon for water-based living. While the opening essay is a bit of a heavy read from an all around positive-toned book, it can be argued that at this point in our history, we need to be heavy-handed in how we approach talking about climate change. The concept revolves around the fact that climate change is society’s new “Pandora’s Box” and Pomeroy serves up some hard facts in describing why:

“Approximately 86 million barrels of oil are consumed on a daily basis to sustain the everyday lives of the 7 billion people walking the face of the Earth – an equivalent to filling 5 pyramids of Giza every day. This number is set to increase given global population projections of 9.7 billion by 2050. By 2030, we will need 50% more energy, 40% more water and 35% more food to sustain the increasing population. By 2050, there could be 200 million environmental refugees worldwide.”

I apologize for the long quote, but it is important that we understand the impacts to then understand why ideas like POG are integral additions to our architectural lexicon. The following two essays focus on thinking “beyond the bottom line” and about attaining net-zero energy, both extremely important issues that should be (at the very least) in the discussion of all future projects. The idea behind working “beyond the bottom line” is to ensure the creation of a sustainable product through incorporating social, economic, cultural, spatial, technological, and environmental aspects throughout the design process. When the book looks at net-zero energy, Pomeroy uses case studies of single family homes and large projects alike to show how achieving this goal is already happening, and how beautiful and seamless it can be implemented in people’s buildings and their lives.

The next section of the book focuses on the premise, and highlights the why and how this idea started. Again, the book uses existing case studies to highlight how the idea started to bloom and grow. These include places such as the floating homes and gangways in Ijburg in the Netherlands, the Bangkok Floating Market (where trading on flotillas has just become a way of life), and our most famous floating city, Venice, Italy. This is followed by a short essay on how cities are already shifting to be more decentralized and repurposed. The arguments for water-based living are strong: two-thirds of the Earth is water, and planning to live on the water can drastically reduce the chances or negate entirely the costs of dealing with a natural disaster (such as a flood).

Chapter three is a case study on a project done by Pomeroy Studios called the “Lexis Hibiscus”, a floating community that has already been built and is operating in Malaysia. These holiday villas were built floating on the water in Port Dickson, a popular tourist location. As with the studio’s core values, Lexis Hibiscus was built looking beyond the bottom line, and all these potential factors went into the process of creating a stunning, floating community. When one looks through the photos and read about the amenities, one would be hard-pressed to think “sustainable” but the amount of engineering that went into this project is astounding: “The verandahs are punctuated with plunge pools. This allows the breeze from the sea to be cooled by the water, which can then percolate deeper into the villa in order to aid passive cooling, and thus reduce the need for artificial cooling.” This is one of many technological and passive ways that the Lexis Hibiscus stands out.

The next, and most inspiring, part of the book is the description of the workshop that took place between Universita IUAV di Venezia (Italy), James Cook University (Australia) and Raffles Design Insitute (Singapore). “Mixed groups of up to 7 persons exploited the cross-discipline/cultural opportunities offered by the diverse pool of students.” What follows is a project-by-project breakdown of the products of the workshop. The vision is inspiring—not just futuristic, but feasible, practical, and well thought-through.

The book wraps up looking to a future project by Pomeroy Studios, at the Isola la Certosa in Venice, Italy. It is a stunning breakdown of what will be an incredible project, perfectly encapsulating everything that makes the POG format feasible and beautiful, and there is a true beauty in the buildings. There is something that we all feel when we are on the water, that calm, serene nature that brings out a different side of us, a more relaxed perspective. The idea of building cities on the ocean used to be the things of science fiction, but POG: Pod Off-Grid – Explorations into Low Energy Waterborne Communities proves that this isn’t the case. We already have the technology we need to make these stunning communities (and eventually cities) a reality. This was an eye-opening read on something that may very well be the norm in the not-so-distant future.