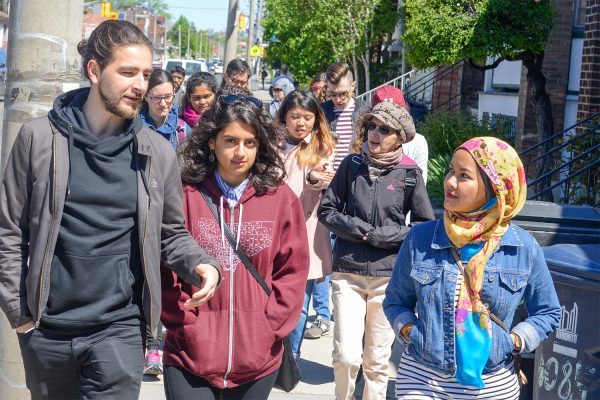 Building solidarity with Muslim communities is fundamentally collaborative and restoring justice in public spaces must be rooted in lived experience.

There is a pressing need to turn public spaces where Muslims have been traumatized into spaces where solidarity is strengthened. Racialized communities have a history of being excluded and alienated from public spaces including parks, public transportation, transit hubs and restaurants. Muslim communities across Canada are no stranger to those experiences, given the current climate of hostility and ongoing threat of Islamophobia.

While anti-Muslim sentiments have long existed in North America—culminating in spectacular tragedy during the Quebec City Mosque shooting—the broader Canadian public are becoming more and more adept at responding whenever Islamophobic incidents occur. Vigils, rallies and petitions pop up quickly, often championed by everyday citizens. Panel discussions and town halls organized by community groups are often well-attended. Nevertheless, in my engagement practice specifically around Islamophobia, I encounter many who aren’t sure how to extend their solidarity beyond those moments of tragedy. They understand that these incidents rob Muslim communities of their sense of safety, but weren’t sure how to help restore it over the long run. 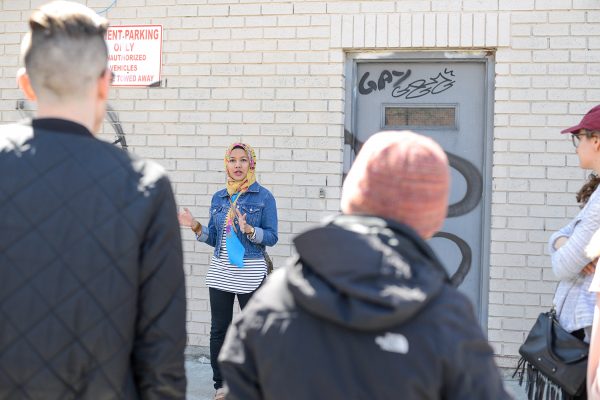 I encounter many who aren’t sure how to extend their solidarity beyond those moments of tragedy. This is what inspired me to organize a Jane’s Walk around my neighbourhood of Bloor West Village.

This is what inspired me to organize a Jane’s Walk around my neighbourhood of Bloor West Village in Toronto. Understanding that building solidarity is fundamentally collaborative and the work of restoring justice in public spaces must be rooted in lived experience, I borrowed from inclusive city builder Jay Pitter’s approach: I invited a couple of friends and fellow community organizers working to address Islamophobia to co-lead the walk with me and share their stories. At each stop, my walk co-leads and I shared stories of how Islamophobia occurred and how personal relationships with Muslims are were pivotal in turning them into sites where solidarity was strengthened. Here’s a summary of the walk:

Muslims are an immensely diverse group of people, much like many other faiths around the world. I set the meeting point for this walk next to Opal Dental Care to emphasis this point. It’s principal owner, Dr. Amin Babul is my dentist and is an Ismaili Muslim. I am a Sunni Muslim. Muslims can vary greatly in terms of their geographic location or origin, school of thought, practices, customs and traditions. Understanding and appreciating this diversity is fundamental to better relationships with Muslim around you. 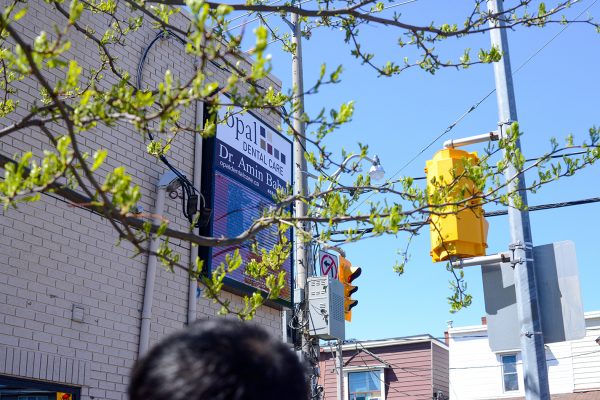 Opal Dental Care on Dufferin Street served as the starting point of my Jane’s Walk in Bloor West Village.

Muslims—especially visible Muslim women–are particularly vulnerable when travelling, be it on foot, on public transportation, or while waiting at transit hubs. The tragic incident in Portland is one of many incidents proving how verbal and physical attacks tend to happen during travel on public transit. Such attacks can rob Muslims of their sense of safety, causing them to curb their movement and detrimentally exclude themselves from spaces where they have a right to be in. On numerous occasions, my decision on whether to attend events or visit fiends hinge on whether I can get there and back home safely. I suggested to the group to offer a Muslim friend, especially Muslim women, a ride to their destination wherever possible. I also encourage the group to volunteer with community initiatives like BuddyUp Toronto, lets you sign up as a travel companion to anyone who feels vulnerable while travelling. 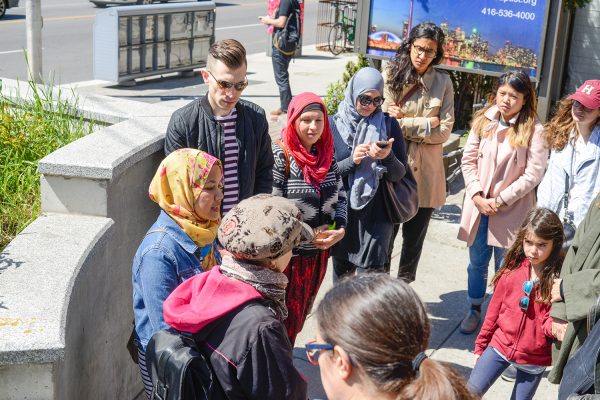 Our first stop was at Dufferin Station where we discussed solutions to the challenge of travelling safely, particularly for visibly Muslim women.

Wherever possible, take the opportunity to communicate your solidarity with Muslim communities. We stopped by the Toronto Dawah Centre and mosque on Bloor Street to check out its wide storefront display which announces events happening inside; following the Quebec City mosque attack, the storefront was filled with messages of solidarity from surrounding community members, including congregants from nearby synagogues and churches. Also following the attack, the White Ribbon campaign was launched, and white ribbons with messages of solidarity appeared in the Parkdale neighbourhood of my friend and walk co-lead, Rusul Alrubail. The educator, community organizer and mother of two spoke about how she was moved to tears when she saw “All faiths welcome” on one of the ribbons. As a visible Muslim and former refugee, the Quebec City mosque incident shook her and her family. Seeing expressions of solidarity in such a public way reassured her that she has allies in her community who will stand with her and her family. 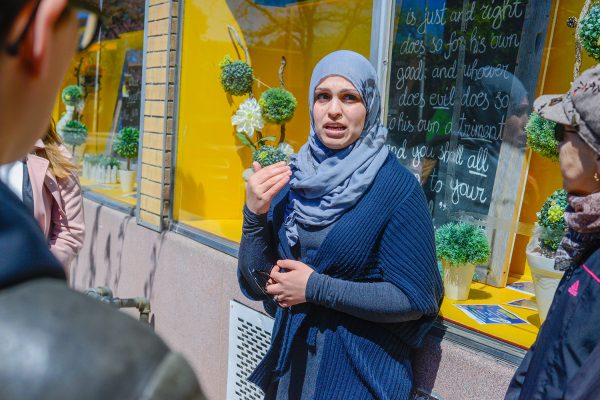 Community organizer Rusul Alrubail stands in front of the Toronto Dawah Centre’s storefront display to share her story about the White Ribbon Campaign.

There are many mosques found around the GTA, some of them located right in the heart of downtown Toronto. Look for opportunities to visit one. Mosques are indispensable hubs for connecting with Muslim communities—often times these mosques perform a critical social function as places where people gather to not only pray but to socialize engage in volunteer initiatives. The Dawah Centre, for example, is open to visitors and hosts a variety of community events, many of them open to the public. My friend and assistant imam at the centre, Ilyas Ally, regularly coordinates with leaders of the nearby synagogues and churches, as well as MPs and MPPs to ensure the centre’s members and the broader community are connected to one another. During our stop there, the group was also lucky enough to meet the film crew for Let the Quran Speak–a show produced by the centre and airs on Vision TV. Stepping inside the Toronto Dawah Centre proved to be invaluable to many who came on my walk. They shared afterwards how they had have walked by the mosque many times but never had the chance or the courage to go in.

Parks have been sites where exclusion can happen in a very public way. I concluded my walk here to talk about how informal community gatherings can fundamentally transform parks into sites of solidarity. When I co-organized Toronto’s first Open Iftar at Dufferin Grove Park last year, I witnessed something beautiful: guests from different faiths, ethnicities and backgrounds who were mostly strangers to one another came to break bread together. Sitting cross-legged on mats over plates of food, the nervous energy they arrived with gave way to casual conversations and laughter. I encouraged the group to leverage Toronto’s public parks to foster stronger relationships at the community level; I encouraged them to invite their Muslim friends, colleague and neighbours to casual picnics. There are also innumerable Muslim-led community events that take place in public parks; take advantage of them whenever you can. 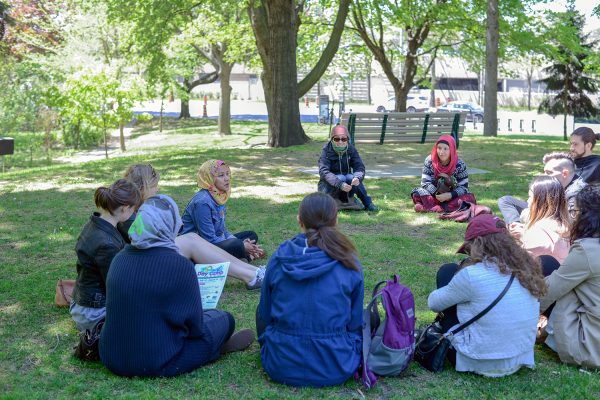 At our final stop at Dufferin Grove Park, I shared simple suggestions how public parks can be leveraged for relationship-building communal events with Muslim communities.

There will be two more Muslim Solidarity Jane’s Walk this summer. Follow me at @shazlin_r to learn when the next one is scheduled. Photos by Mariam Ahmad.