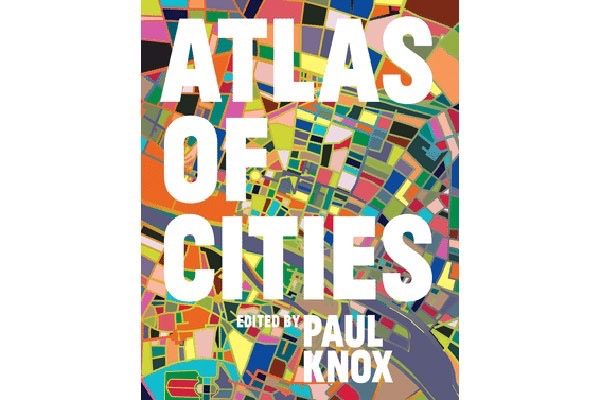 With cities at the centre of all major global phenomena—from climate change to population growth—it is no surprise to see the explosion of printed material focused on urban centres. Given their complexity books on the subject cross disciplinary boundaries, ranging from popular titles to academic texts. This has gone hand-in-hand with the eruption of information available on metropolitan areas from around the world. And with the increasing popularity of data visualizations and info-graphics, it has never been easier to convey the complexity of our cities to a wide audience: a sentiment that accurately captures the goal of Paul Knox’s Atlas of Cities.

As winner of the 2014 AAG Globe Book Award for Public Understanding of Geography (as chosen by Association of American Geographers), it sits distinguished among a number of excellent books, including one of my personal favourites, William G. Loy’s wonderful and visually stunning Atlas of Oregon. Although both share certain similarities—specifically their beautiful graphics and clear, accessible writing—the Atlas of Cities attacks its subject through a taxonomic lens.

More specifically, the book classifies cities into ten different types, each of which has ‘core’ and ‘secondary’ cities that exemplify their qualities. This becomes the basis of the book’s structure, as each city type becomes a chapter within which graphic-heavy spreads cover varied topics related to their respective ‘core’ cities. With each chapter authored by different of contributors, the issues discussed are wonderfully diverse—ranging in scale and subject matter. The Atlas of Cities breaks down as follows:

It is worth noting that, given the quantity of cities and focus on visual information, the written content necessarily remains concise—more brief summaries of urban phenomena than comprehensively detailed pieces. This being the case, the Atlas of Cities serves its purpose as an easy-to-read, graphically-compelling entry point to understanding some of the complexity of cities exceedingly well—ideal for planning and design students, as well as budding urbanists of all ages. The high-quality of information design and printing will also appeal to those interested in city visualizations. For well-seasoned urban professionals and academics, the wide cross-section of cities covered in the book offers an easy and quick reference for information on some of the dominant cities in the contemporary world.

Overall, the Atlas of Cities follows in the footsteps of the most engaging atlases of the recent decades, offering a little something special for everyone…in a beautifully designed package.

For more information on the Atlas of Cities, visit the Princeton University Press website, where you can preview pages, watch a video of the book and download some free content.