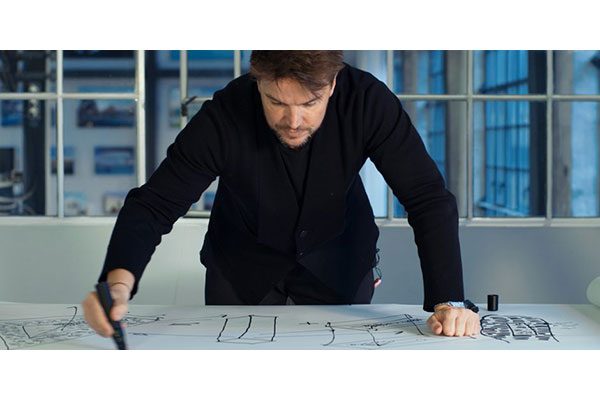 Not often does Spacing have the opportunity to review a movie receiving its North American premier, including an interview with the film’s director, but such has been the case here with BIG Time, a personal and in-depth documentary of Bjarke Ingels and his whirlwind career to date. Directed by Danish director Kaspar Astrup Schröder, the young filmmaker gave Spacing Vancouver an hour of his time a few Sundays past, in which he shared the details of working with the architect to realize the film. In the same tradition as other architecture documentaries such as Sydney Pollack’s Sketches of Frank Gehry and Nathaniel Kahn’s My Architect, the 1 ½ hour film reveals a side of the architect that is perhaps more personal than has ever been explored before, and both non-architects and architects alike are in for a treat.

Precipitated on Bjarke opening his New York office in 2010, and edited down to its running time from over 120 hours of footage, Kaspar admitted that at the beginning of the project there was no agenda as to what the narrative of the film would be. “Bjarke said just to come and hang out in New York, and I started filming.” With Kaspar’s wife—also an architect—working for BIG in their Copenhagen office, the friendship between the filmmaker and his subject is quite pronounced, enabling an informal interaction between Bjarke and the camera and allowing for frank conversations to happen spontaneously during cab rides in NYC, or while driving to his parents’ house in Denmark.

Kaspar also confessed that he brought Bjarke into the editing process later rather than earlier since, once he had established his narrative, it remained for the subject himself to merely tweak the final product in order to ensure that the film was Kaspar’s and not merely a marketing video for BIG. With BIG Time as Kaspar’s fourth full-length documentary, and his first one to feature an architect, he convinced Bjarke that the film needed to appeal to universal themes – family, mortality, personal relationships – allowing the architect to confront head on the problems that a quick rise to fame has brought him. Across two offices totaling 400 staff, the film does not back off from some of the tough conversations with both clients and those working for the firm.

As a result, the bulk of the projects themselves take almost a backseat to the story, with brief segments of the movie scrolling through images of many of his completed and future projects (Vancouver House making a quick appearance as one of the future works). Four projects however emerge as the ‘biggest’ in Bjarke’s portfolio – the Denmark Maritime Museum completed in 2013, a waste-to-energy power plant in Copenhagen scheduled to be completed next year, VIA 57 West, and the WTC 2, the last two of which led to Bjarke’s decision to open a New York office. As one would expect, Kaspar gets behind-the-scene—inside the boardrooms and on the construction sites filming some of the interaction with his clients, including one humorous conversation with Larry Silverstein, as well as a site visit to one of his VIA 57 West client’s projects—the now completed WTC 1.

Featured recently in the Netflix series Abstract along with a well seen TED talk from a few years back, I was pleasantly surprised to learn a few new things about the young starchitect. I was just as surprised to see that he didn’t flinch when the camera placed him in a less than flattering light. Over the course of the film, it seems clear that Bjarke is feeling the strain of running such a large enterprise (with one client asking “How do you sleep at night?”). Kaspar has left in just enough of the tough board meetings, difficult conversations with his partners, and borderline shouting matches with his staff, that it is an illuminating insiders view of a working architecture practice without being heavy-handed and overbearing.

Without a sense of what the film was going to be about when Kaspar began filming, the movie has an organic feel to it, with one event in particular among the many featured in the film – including Bjarke’s 40th birthday party – being allowed to emerge and become the main story line. Freed then from the constraints of having every scene framed in architecture (as happened with Pollack’s Sketches of Gehry), each section of the film is able to be announced with non-architectural imagery, immersed in an original score of piano and strings that the filmmaker has utilized in his more recent documentaries. By doing so, Kaspar has captured not just the universality of one person, but of architecture as well, allowing the common threads between humanity and architecture to become even more apparent.

This includes one of the movie’s more profound moments, when Bjarke talks about another famous Danish architect, Jorn Utzon, and how the Sydney Opera House almost destroyed him and his career. It is a fair comparison, as both architects had the start of their careers accelerated by winning a competition, and while Utzon sadly never set foot in the finished building he designed, it has become a symbol not just for Sydney and Australia, but for all of architecture. The building is now archetypal, and the kind of career defining building that Bjarke believes every architect aspires to. Told as it is, it is a notion even non-architects can understand, over and above being a cautionary tale that every aspiring architect can relate to.

The second half of the film, which could be called ‘Inside the Mind of an Architect’, takes on a much heavier sense of gravitas, as Bjarke runs through a number of famous architects and how they met their demise. It is a grim enumeration told as a warning bell: much as Icarus flew too close to the sun, despite his architect father Daedalus’ warnings. This, in turn, frames the difficulties Bjarke finds himself encountering, as his presence in New York causes his Copenhagen office to fall into disarray, losing projects and money at home. At one point in the film, one of his partners asks whether they have become too big for their britches: a question we find both the architect and filmmaker returning to frequently.

In the end, the film returns to the ‘big’ questions and, most significantly, what makes us happy? Whether a starchitect, or simply working in the local supermarket, we all seek the same creature comforts when we return home at the end of the day. Kaspar has ably captured his subject doing the same – hanging a new piece of art in his apartment, walking through the park with his girlfriend, bicycling to his office through the streets of Manhattan. But it is the final scene in the movie which brings it all home, with the moral being that, despite one’s intelligence and ability, there are still moments in life when one is unexpectedly confronted with the fact that all you have learned still cannot prepare you for executing some of life’s most simplest tasks.

As such, BIG Time is not just a film for our time – it is a film for all time, both big and small.