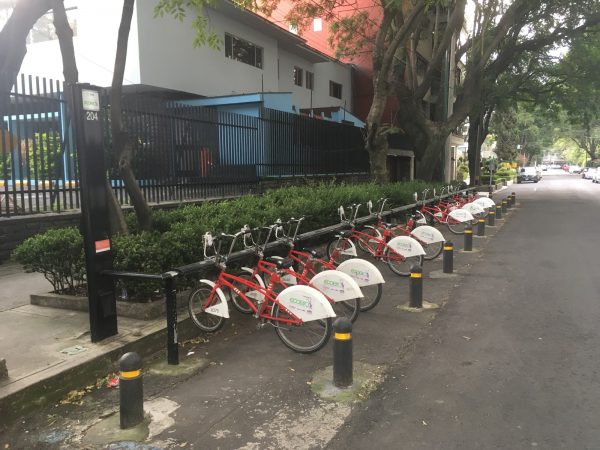 This post by Ryan Anders Whitney is part of Spacing’s partnership with the Toronto Cycling Think & Do Tank at the University of Toronto. Ryan is an urban sustainability planner and current PhD student in the Department of Geography and Planning at the University of Toronto. This post is part of a larger research project lead by Dr. Paul Hess that has been funded through the Social Science and Humanities Research Council of Canada (SSHRC).

Cities around the world have been increasingly investing in bicycle and other ‘sustainability’ infrastructure in an effort to move growing populations within fixed roadway space. Across Europe, North America, Australia, and South America, many cities are building bike lanes, inaugurating bike share systems, creating open streets / ciclovía programs, and pedestrianizing streets in an attempt to plan more ‘livable’ cities and mitigate the negative consequences associated with automobile development (e.g., air pollution, obesity, traffic deaths, traffic congestion, etc.). In Latin America, Mexico City has emerged as a regional leader based on its’ rapid implementation of such infrastructure.

Mexico City’s investments take place in the context of some of the most extreme consequences of automobile-based development found anywhere in the world. In the 1990s the United Nations infamously named the city as having the world’s worst air pollution, in part due to automobile exhaust that becomes trapped by the mountains that surround the city. While the city has made some coordinated and effective strides to improve air quality since then, pollution levels are creeping back up again to dangerous levels. Indeed, Mexico City’s traffic congestion remains legendary, being named in 2017 as the world’s most congested city.

Furthermore the city, and indeed country, are infamous in planning circles for high levels of traffic deaths. In 2015 412 pedestrians were killed in traffic incidents in Mexico City, a number that is common annually. This number would be approximately equivalent to a death rate of about 140 pedestrians per year in a city of Toronto’s size, or approximately 3.5 times Toronto’s 2016 rate (43 pedestrians were killed in 2016 making it the most deadly year for pedestrian deaths in the city in over a decade). Such an enormous death toll in Mexico City is despite the fact that over 50 percent of households do not have access to a motorized vehicle. However, in an urban region of well over 20 million people, the number of drivers adds up quickly.

In an attempt to relieve some of the aforementioned issues, Mexico City has deliberately moved from a city where it was nearly inconceivable to ride a bike to one that now leads bicycle planning in Latin America and beyond. For example, the city now has one of the largest bike sharing system in the Americas, approximately 200 kilometers of bike lanes, and one of the world’s largest ciclovía programs, muévete en bici (move by bike), where 55 kilometers of streets are closed to traffic and open to pedestrians and cyclists every Sunday. These initiatives have been very successful. For example, Ecobici, the city’s bike sharing system, is one of the most successful in the world in terms of a number of indicators including the number of trips per bike versus the number of residents; it is estimated that number of cyclists in the city between 2008 and 2016, although still a very small percentage of overall mode share, increased nearly six times; the Sunday ciclovía attracts approximately 35,000 people each week with a record of 75,000 having been recorded. The city is also home to a number of new municipal government policies and departments – including, but not limited to, Laboratorio para la Ciudad (Laboratory for the City) and the Autoridad del Espacio Público (Public Space Authority) – that are at the cutting edge of urban sustainability planning within Latin America, and indeed globally. All of this change has happened quickly in planning terms, in less than ten years. 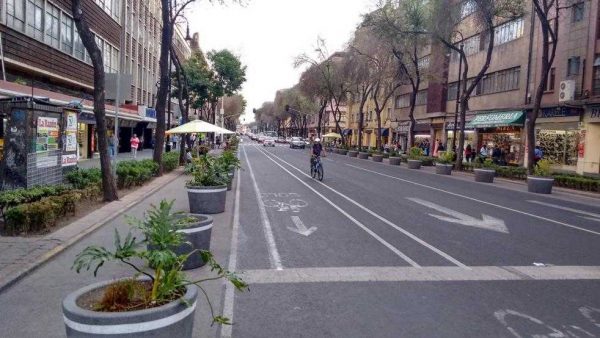 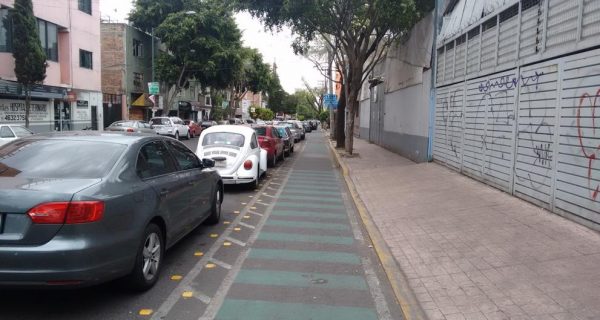 Many other sustainability initiatives, such as public space ‘revitalization’ and the pedestrianization of streets, have also been remarkably successful in Mexico City. For example, the city pedestrianized Madero Street in 2010, linking the country’s most famous public square (the Zócalo) to its most iconic theatre (Bellas Artes). The street might now be the busiest pedestrian street in all of the Americas attracting an estimated 200,000 pedestrians per hour. This street also exhibits some of the highest land values in the city, up 400 percent per square meter, and has attracted a number of international chain retailers, often being cited by local authorities as an example of commercial success. 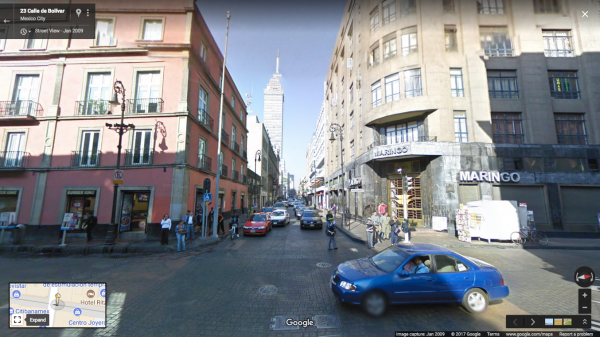 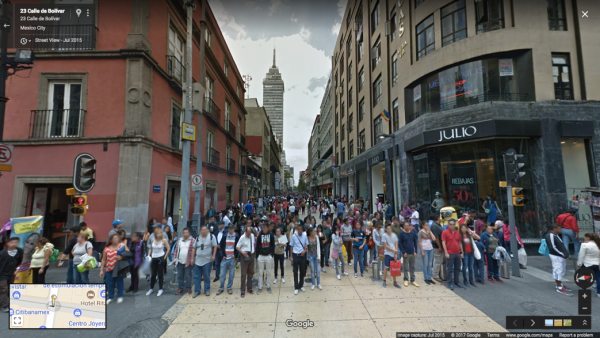 When examined more closely, however, the aforementioned sustainability investments fit comfortably within a larger trend where Mexico City is establishing itself as a global ‘it’ city, attracting unprecedented international attention. For example, in 2016 The New York Times named Mexico City as the world’s number one travel destination; a popular lifestyle blog, Amuse, discusses Mexico City’s reputation as “the new Berlin” specifically referring to how it has emerged over approximately the last ten years as a global creative epicentre attracting international designers, writers, and artists; recently Dazed stated that “Mexico City today has the freedom of downtown 80s” New York City.

The recent uptick of international attention is for a variety of reasons, such a the city’s unique culture, foodscape, art scene, decreased levels of violence when compared with other areas of the country, and a low cost of living (at least from the perspective of those who live in large cities in the Global North). However, sustainability planning is also a tactic that is now being used to sell Mexico City as a ‘green’ and ‘livable’ city. For example, another 2016 travel article from The New York Times discusses the newfound attractiveness of the city partially due to its “extravagant plans for new pedestrian areas”; Forbes gushes that Mexico City is now “safer, cleaner and more liveable than it used to be”; The Guardian explains how the city has been ‘cleaned up’ through neighbourhood revitalization and pedestrianization schemes.

Unprecedented global attention is rightfully attracting an increasing amount of local criticism. Much of this criticism highlights the implicit elitism and privilege of foreigners and wealthy Mexicans who can choose to live in the city’s most walkable, bikeable, and trendy neighbourhoods, a reality that is completely disconnected from that of most Mexicans. Furthermore, much of the popular global attention, especially within the English-speaking world, discusses the ‘discovery’ of Mexico City, ignorant of colonization and the fact that the city has long been a cultural leader, attracting notable artists, academics, and other professionals throughout its extensive and complex history.

This leads to the not-so-rosy side of the development of bike lanes and other sustainability infrastructure in Mexico City: the unintentional reinforcement of extreme class divisions that have always characterised the city. More specifically, much of this new infrastructure has been built in the most privileged, central-city, trip-dense areas of the city despite the need, existing cycling mode share, and lack of sustainability infrastructure in other, economically-disadvantaged areas of the city, such as Iztapalapa. In other words, a more trendy, sustainable Mexico City is leaving behind many residents who remain in poverty and disconnected from the cultural and political elites. In fact, many of these investments, such as the aforementioned pedestrianization of Madero Street, can be considered textbook examples of displacement, mainstream globalization, and gentrification. It is also important to note, that despite major improvements, by many accounts Mexico City still remains a scary place to ride a bicycle.

What do we do? For starters, we need to accept that this is an issue in many cities, not just in Mexico City, and that we as planners need to pay more attention to the local context of the cities in which we work. Cities are increasingly being planned based on global best practices that travel between cities through international exchanges and conferences. However, the implementation of such planning best practices can lead to varied outcomes within different political, cultural, and institutional contexts. An urban planning policy, for example, that has certain outcomes in New York City cannot be assumed to have the similar ones in Mexico City. Even more, sometimes the outcomes of a best practice policy may look similar on the surface (e.g., bike lanes or a bike share system), yet the underlying impacts in terms of gentrification, inequality, and institutional change can differ significantly. It is to these ‘less visible’ outcomes that planners need to turn in an attempt to create more equitable cities. Furthermore, in Mexico City, we must recognize that inequality is a systematic problem with deep historical roots that can be seen across sectors (including the destruction and associated relief efforts following the devastating earthquakes that hit the city and country on September 7th at 19th, 2017).

How bicycle and pedestrian infrastructure is implemented in Mexico City in terms of equality has important implications. As one of the world’s most populous and complex cities, it is a large-scale example of a global trend where planning is attempting to create more sustainable cities. The city also highlights how equality is often lost in the planning process. Can sustainability truly be achieved without increased equality? Or will “sustainability” continue to be something that disproportionately benefits the wealthy? Such questions are of utmost importance in an era of international economic policy, rising economic inequality, and increasing environmental degradation. How planners integrate sustainability with questions of equality will be the true test in creating more livable cities, in Mexico City and beyond. Toronto would do well to consider these issues as well, as the broadly downtown-centric bike plan slowly unrolls, with even less investment in the poorer suburban neighbourhoods lacking good transportation and access options.