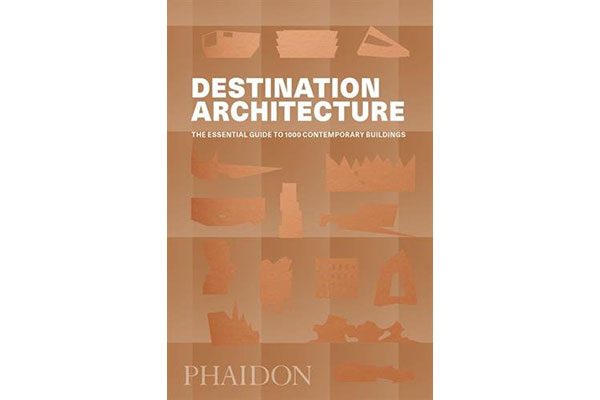 The global perspective provided by this portable book makes it the ideal companion for all travelers who love architecture. It includes work from countries as culturally, geographically, climatically and economically diverse as Argentina, Senegal, Denmark, the Philippines, Israel, Egypt, Lithuania and the USA. The building types represented range from super-scale towers to tiny places of worship, high-tech cultural centres to regional rest stops.

Much in the spirit of Phaidon Press’ 2004 released Atlas of 21st Century Modern Architecture, Destination Architecture: The Essential Guide to 1000 Contemporary Buildings is a wonder to behold, and a year-end gift of 2017 to ponder along with the current events going on in the world. Unlike the Atlas, which had an astonishing 800 pages of 4600 illustrations, this tiny compendium fits into the palm of your hand, a cleverly designed handbook that doesn’t require a piece of luggage to tote it around in.

And as noted in a recent review of the same book in Architectural Record, it is evident that our transference from an analog to a digital paradigm—at least for architectural academia—is starting to leave some of our millennials behind. Thom Mayne of Morphosis Architects, who has lectured and given guest critiques up and down the West Coast, including UBC SALA, recently noted how current students’ familiarity with architectural history is waning. Whether or not our wiki-world is to blame, Destination Architecture is an attempt to provide for what is falling between the cracks in our profession’s selectively edited erudition, a call to arms to provide a primer of global architecture, represented here by 1000 buildings built in the last few decades (though for the most part they fall on this side of the 21st century).

In order to fit 1000 buildings in less than 600 pages, the editors have devised a formula whereby each building has been reduced to a single landscape colour photo, accompanied by a small write up, with four buildings featured over two pages. In this way the whole becomes greater than the sum of the parts, as each representative building begins to provide a geographical narrative for the 70 countries represented in the book—each conveying its own unique take on critical regionalism. Even the international starchitects, who show up all too frequently, begin to lose their own individuality when framed in such a massive context, refreshing to say the least.

As a further aid to navigating the book, maps of each of the 70 countries are provided in simple black-and-white graphics. The editors could’ve opted to use colour instead of monochrome tabs to represent each region in the book, a missed opportunity which could’ve enlivened the pages, perhaps reconsidered at the last minute as being too much of a distraction from the featured buildings. Despite this oversight, the book has a tight and concise format to rival the imagery of any computer monitor or smart phone screen, which may very well be at the heart of this ambitious handbook’s raison d’etre.

The book is also a testament to the globalized nature of the business of architecture, which clearly has enabled the modern architect the ability to practice in all corners of the planet. Work by Renzo Piano, Frank Gehry, Herzog & DeMeuron, OMA and the late Zaha Hadid are all featured in regions far from their home offices, much as the extensive representation of built work in the USA is host to both local and international architects (much of which we’ve seen in the pages of Architecture Record over the past decade). Overall, the editors have accomplished a formidable feat, given the herculean task to represent a world of architecture. Those of us choosing to have this book in their library are richer for it, given that it provides for such a staggering amount of architecture, easily and nimbly, at one’s fingertips.

If there is one criticism, however, it is that Canadian architecture has been woefully under-represented. With only 18 buildings out of 1000 selected to represent our fair nation (with four on Fogo Island in Newfoundland), this represents 1.8% of the book’s content. I know several architects, myself included, who might take offense to the idea that their livelihood has made such a small impact on the world stage. Despite this, the buildings selected manage to represent at least two of Canada’s freshest and most talented firms – 5468796 Architecture and FABG – along with older more established firms like KPMB and Lemay. However, the book should’ve also included more of the young, amazing talent from Montreal and Vancouver, with the absence of work by both McKay-Lyons Sweetapple Architects and the Patkau Architects—who represent the literal bookends to our nation—being a missed opportunity.

But to point fingers at the editors of this book is perhaps as laughable as the nation’s under-representation itself—there is a bigger conversation here, one hinted at by an article in this week’s Globe and Mail entitled ‘Canadian Architecture needs the support of a national policy’. Written by Toon Dreessen of Ottawa-based Dreessen Cardinal Architects, he hits the nail squarely on the head that federal government support by both recent Conservative and Liberal governments has recently slumped to all-time lows when it comes to architecture. This was also recently noted in June by the editor of Canadian Architect over the poor showing of any building program for the nation’s sesquicentennial, and certainly when compared to the architecture policies of both the US and Europe.

With First Nation’s architecture set to represent Canada at the next Venice Biennale, along with the presence of a formidable Canada House at the Winter Olympics in Pyeongchang, now would be the most salient moment to strike a Canada Public Work’s commission to create a Destination Architecture equivalent for Canada, with perhaps the support of the Canada Council for the Arts and the Canadian Centre for Architecture. At the very least, there needs to be a conversation about the glaring fact that out of the 18 buildings representing our country, over half of them have been designed by non-Canadian architecture firms.