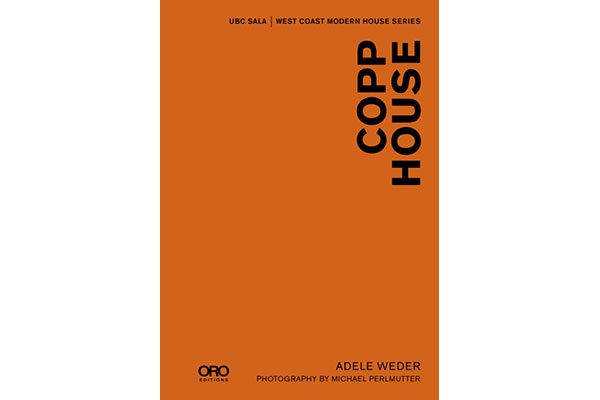 In a mansion-filled Vancouver neighbourhood not far from the University of British Columbia stands a low-slung cedar fence, silvering in decay and overflowing with rogue greenery, but still marking the entry point to the D.H. Copp House… Embodied within it is a distillation of the primordial design values of Ron Thom, one of the most important architects of postwar Canada… the Copp House would become a touchstone project for him, and the Copp family would remain his lifelong friends and supporters.

As the sixth book in this series from UBC SALA, one can begin to see the connections between the eight houses selected for this first collection of endangered West Coast modern homes. As each one’s release has been carefully mapped out by the series’ editors Leslie Van Duzer, Chris Macdonald, and Sherry McKay, along with photography by Michael Perlmutter, book design by Pablo Mandel, and line drawings by Lorinc Vass, the tumblers are falling into place with the series continuing to reveal itself one book at a time.

For this sixth house, designed by the seminal Ron Thom, the connection between this book’s architect and the preceding five books in the series is as much an indication of his rightful place in the story of the rise of the West Coast Modern house as it is a testament to his influence on all who would follow in his footsteps. Thom was mentor to both Paul Merrick and Arthur Erickson at the office of Thompson Berwick and Pratt, and was himself a student of B.C. Binning, all three of whom also have houses featured in the SALA book series.

And the book’s editors could have not selected a more perfect author for the Copp House, as architectural critic and curator (and current editor of Canadian Architect) Adele Weder mounted a travelling exhibition in 2013 on Mr. Thom. As such, she is the perfect advocate for his work, able to present us with the rationale for the Copp House’s inclusion in the series, and how his work provided much inspiration for many of the other houses representing the West Coast Modern movement.

As she tells us in the book’s opening pages, Mr. Thom was 27 years old when the commission fell off of Ned Pratt’s drawing board onto his—with a design brief to provide a modest house for Harold and Winnifred Copp close to UBC, Harold having just been appointed the head of the Department of Physiology. Here again is more connective tissue in the West Coast Modern House book series, being as it was that the Friedman House was also designed for UBC faculty Sydney and Constance Friedman, themselves also having been recently appointed to the Department of Medicine.

This time around, we learn how Harold Copp had a connection to J. Robert Oppenheimer and the Manhattan Project, having been given the task of examining the effects of nuclear fallout on bone marrow. Perhaps finding this rather odious task not to his liking, he and his wife made the decision to return to their native Canada to raise their family, where his research at UBC would later result in his discovery and naming of the hormone calcitonin, an important development in the treatment of bone disease.

And so Adele tells the story, with tongue firmly planted in cheek, of the Copp House as the story of one of Vancouver’s first ‘nuclear families’. As one of the earlier West Coast Modern houses to be built in the region in 1950, Mr. Thom would’ve leaned heavily on the influence of B.C. Binning’s own house which he built in 1938, and which used readily available local materials in lieu of expensive finishes, taking full advantage of the breathtaking views, as well as preserving as much of the site’s natural vegetation as possible. Adele also points out that Harold had no problem rolling up his sleeves to help out with the house’s construction, even encouraging his daughters to pick up a hammer and join in.

With the site for the house sloping on its north side towards Spanish Banks, Thom chose to situate the long axis of the house parallel to the side facing the ocean and North Shore mountains to take full advantage of the views, with an upper floor volume for the bedrooms perpendicular to the main floor, pivoting at the fireplace in the house’s living room. For the hearth and chimney, Thom selected red brick, with its utilitarian common bond expression emblematic of the language that would characterize his material palette for the remainder of his career.

The book also emphasizes how important the architect-client relationship was for Thom, with his clients often becoming lifelong friends, and the Copps were no exception. And while several other books in the West Coast series feature interiors designed by their architect, the Copp House is as yet the only one to include furniture designed by its architect. For as Adele points out, Thom’s friendship with the Copp’s would endure well after they had moved into their house, such that when Thom was tasked some years later to design all the furniture for Massey College, Harold was able to convince their friend and architect to provide several tables and chair prototypes to furnish their own house.

While we can marvel at these houses and the challenges our current affordability crisis means for their continued existence—the Copp House itself has been recently assessed at $65,000, while the land it sits on is assessed at over $33 million—perhaps in the end the West Coast Modern House series can provide us with a Nietzschean re-evaluation of our overinflated real estate, while providing an ongoing forum for dialogue between the academic and professional circles present at each book launch, which continue to be generously hosted by Nancy and Niels Bendsten of Inform Interiors.

At this point in the book series, we should also applaud the differences between each book alongside those elements that remain constant—the wonderful book design by Pablo Mandel, the crisp colour photography of Michael Perlmutter, along with the efficient format demanded by the editors. In contrast to this, each author brings their own idiosyncrasies to their respective subjects. For Copp House, Adele Weder has provided a reproduction of Ron Thom’s original stamped hand drawing of the house, as much a marvel to behold as Lorinc Vass’ minimalist line drawings at the end of the book.

With Canadian Architect having recently reviewed the book series, I must respectfully disagree with the observation that it may have been a better decision by the editors to open up the series to authors outside the Lower Mainland (and it should be noted, Michael Prokopow is originally from Victoria). The whole point of having local writers and architects penning this series is precisely to get beyond the subtext and just showcase these homes as they should be seen, and certainly before they are all but gone (as we have already lost the Shumiatcher House, the first house in the series).

For truly how else could the editors of the series have justified the eighth and final book to be penned by Douglas Coupland, as was just recently announced at the Smith House II book launch?