In the history of modern cinema, the relationship between architecture and human drama has only been fully exploited by a few filmmakers, and it could do an architect well to learn how architecture is used as a mise en scene for film. This was thoughtfully articulated by Finnish architect Juhani Pallasmaa in his book The Architecture of Image (2007), within which he effectively shows us the importance of architecture in four iconic filmmaker’s work – Hitchcock, Kubrick, Tarkovsky, and Antonioni.

And so from now until July 21st, one of these filmmakers is currently the subject of a touring retrospective at the TIFF. Modernist Master: Michelangelo Antonioni features fifteen breathtaking reproductions of his work, and at the end of the summer this retrospective will continue to tour across Canada and the US film festivals. These newly restored 35mm prints also provides one the opportunity to see how the architecture this auteur filmmaker selected for his films appears on the silver screen as was intended, providing for the full gravitas of which his shots are composed.

For as Juhani points out in his book, ‘Michelangelo Antonioni had a keen interest in architecture, and settings are seminal to his art, believing the location is the very substance from which the shot is made.’ Watching his earlier work in this retrospective, one sees an oscillation between constrained, remote settings, like the volcanic islands in L’Avventura (1960), to larger, expansive sequences in Milan, Verona and Rome. In his earlier trilogy, Antonioni features fascist architecture as the backdrop, as in L’Avventura and L’Eclisse (1962), exposing them for their starkness, and providing an alienating backdrop for his characters. 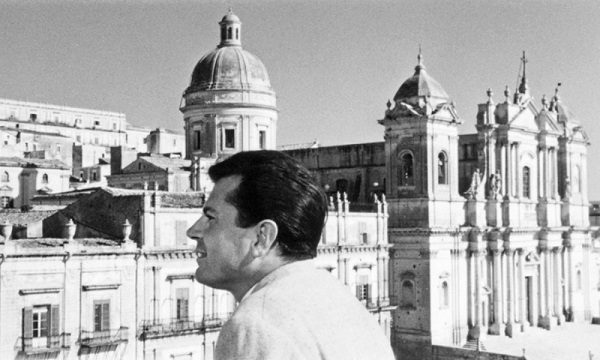 With the number of locations in each of his films continuing to grow over time – perhaps to accompany the opening of the spectrum in 1964 when he began filming in colour – his early black and white films are for this reason more elemental, with an admixture of setting, music, and lighting, all executed as one large brushstroke. This collision of architecture and existentialism is apparent in the opening scene of La Notte (1961), as a heavy piece of construction machinery narrowly misses hitting the main characters in their car as they are driving down the street, on their way to see an old friend who lays dying on his deathbed.

Such symbolism is at the core of Antonioni’s use of architecture, blatant or otherwise. Another obvious use is also in the opening of La Notte, where the roll of the credits is accompanied by a camera shot descending one of Milan’s tallest office towers, with views to the city still rebuilding after the devastation of the Second World War. An opening shot of the tower from the street likewise reveals the modernist building’s juxtaposition with the older city building fabric around it. The tower, much like each of Antonioni’s protagonists in his famous trilogy, is an auspicious character among the otherwise small, nondescript buildings around it, themselves surrounded by the ruins of bombed out structures from the war.

La Notte – often overlooked because of the success of L’Avventura and L’Eclisse, each of which are the bookends in Antonioni’s famous trilogy – remains one of his earlier masterpieces when it comes to including architecture in the story line. It is also perhaps one of his few films that could be converted directly to the stage, as its four acts take place and are defined by otherwise contained events – a hospital room, a book launch, a night club, and a soiree at a villa in the country. The final scene takes place in a modern villa where a Bacchanalian party occurs, and is itself a Rationalist structure of modern glass and concrete, serving as the backdrop for the interplay of the characters. Just as the live music at the party being performed in the villa’s garden becomes a prominent part of the narrative, so too does nature, as a sudden torrential downpour causes the outdoor party goers to seek shelter inside.

Many of his scenes are often accompanied by the use of wind, whether a curtain moving next to a window or otherwise. The use of rain, in particular, emphasizes the positive and negative spaces it creates along with the villa’s architecture of plate glass walls, providing a backdrop for some of the film’s most breathtaking moments. Through the ennui of his characters one can almost smell the dampness of the air intermingling with their catharsis.

La Notte also features a shot that appears almost as an afterthought, where a crowd of people at the party briefly assemble to bid farewell to a dignitary. Without any dialogue at all, this shot set in the villa’s garden simply shows the gathering of a group of people along with their immediate dispersal, not serving to move the story along, yet providing one of the singular most beautiful shots in the entire movie, certainly as a study of the movement of people as seen from a single observer’s point of view. This style of film making made Antonioni famous, as he would film his seven minute continuous shot for The Passenger several years later, considered by many as his greatest film.

By the time one arrives at The Passenger in 1975, Antonioni’s eye for architecture is ‘blown up’, providing as he does for a dizzying tapestry of locations for the film, including stops in London, Barcelona, Munich, with rural settings in the African Sahara and southern Spain. With the main character played by Jack Nicholson – in his prime having recently appeared at that time in Roman Polanski’s Chinatown and Milos Forman’s One Flew Over the Cuckoo’s Nest – his foil is the Girl, played by Maria Schneider, who plays an architecture student.

Two prominent buildings by Antoni Gaudi are then featured in The Passenger, the Palau Guell and Casa Mila (La Pedrera), as Antonioni has the Girl and her ‘passenger’ visit them. Casa Mila, in particular, provides a surrealistic moment in the movie. Says Pallasmaa, “the roofscape of chimneys, reminiscent of Medieval helmets and armour, evokes a primordial dreamlike world which is juxtaposed with the endless expanse of the surrounding modern metropolis. The camera tilts astonishingly from the micro-scale of a quarreling couple on one of the balconies of Casa Mila to the anonymity and immensity of the city in the distance.”

Over the course of over a dozen years, the complexity of Antonioni’s carefully composed scenes in each of his films owes as much to the architecture as the story and its characters, certainly evident when one compares his earlier trilogy movies to later masterpieces like The Passenger.

And as the self-acclaimed outsider to the post-war Italian Neorealism movement, his film making could be said to have more more in common with the Postmodern architecture of Robert Venturi and Charles Moore, breaking the rules of film making and reassembling the component parts in such a way as to show the anomie of modern existence.

As such, he stands apart from such contemporaries as Rossellini and Pasolini, the same way the Greek tragedian Euripides stood apart from Aeschylus and Sophocles, more concerned with the meaning (or meaninglessness) of individual human action than grander, universal themes.

Not to be missed, Modernist Master runs until July 21st at the TIFF.