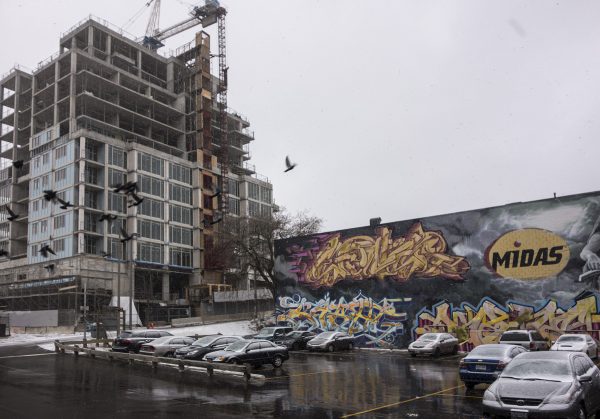 We hear a lot about missing middle housing in Toronto these days: it’s something our city needs more of, it’s one of many solutions that could address our housing challenges, and it’s a change pro-development YIMBYS seem to support.

But what exactly does the missing middle mean in the Toronto context?

The Canadian Urban Institute and Evergreen’s new report What is the Missing Middle? outlines a framework for the missing middle that consists of three lenses: built-form, tenure, and location.

In terms of built form, the missing middle falls between high-rise buildings and single detached homes. This includes row houses, apartments in buildings under five storeys, townhouses, apartments in duplexes, triplexes, fourplexes, and other innovative forms of development such as garden and courtyard apartments, live-work units above commercial businesses, and laneway housing. In Toronto, low- and mid-rise apartment buildings also fall under the missing middle because they serve similar functions – they promote walkable urban living and fit into the character of many residential neighbourhoods.

In terms of location, missing middle housing is absent from much of the city. The City of Toronto Official Plan (OP) directs new development to areas that encompass approximately 25% of the City’s lands. Most new residential growth in Toronto has been in Downtown and Central Waterfront, Centres, and Avenues. Accordingly, many locations in these areas experience significant development pressure (and, by extension, high land values), often making the development of missing middle housing economically undesirable. This has resulted in a lot of Toronto’s housing supply becoming increasingly reliant on high-rise buildings. In the last five years alone, more than 64,000 new high-rise units were constructed.

The remaining 75% of the City’s lands are protected from significant intensification to preserve green space and the existing ‘character’ of areas designated in the OP as Neighbourhoods. The majority of the Neighbourhoods are colloquially known as the ‘Yellowbelt,’ and are zoned for detached and semi-detached houses, generally excluding missing middle housing types and increased density. That leaves very limited parts of the city – those zoned Residential Townhouse, Residential, and Residential Multiple – open to moderately denser housing types like townhouses, duplexes, triplexes, fourplexes, and low-rise apartment buildings.

In other words, missing middle housing is ‘missing’ not just from areas experiencing high levels of growth but also from neighbourhoods throughout much of the City. The result has been growing polarization between tall, high-density development in designated growth areas and dispersed, low density housing in the Neighbourhoods. Everything in the middle is increasingly ‘missing’ from Toronto’s urban fabric.

In terms of tenure, the city is missing certain types of rental housing. Not only has most new housing supply in Toronto been delivered through high-rise buildings, but this supply has predominantly been delivered in the form of condominium apartments. Condominiums blur the boundaries between housing tenures, as condo apartments can be either owner- or renter-occupied. While there has recently been an uptake in purpose-built rental starts, persistently low levels of rental construction over the last couple of decades has resulted in a growing proportion of condos being rented out to accommodate growing demand for rental housing. Toronto needs to strive not only for a healthier balance between rented condominiums and purpose-built rental housing, but also for a greater balance of rental housing types. Focusing on the missing middle provides one opportunity to address these imbalances.

It’s clear that Toronto isn’t providing an appropriate range and mix of housing types, tenures and densities to meet the current and future needs of residents. What can the missing middle do to help?

One among many housing needs that are not being adequately addressed in Toronto is the need for suitable housing, defined as housing with enough bedrooms for the size and makeup of resident households, according to National Occupancy Standards (NOS). Close to one third of families who rent in the City of Toronto are living in unsuitable housing by NOS standards. As a mid-range housing type that is larger in size than most dwellings in high-rise apartment buildings, but denser and typically more affordable than single- and semi-detached houses, missing middle built forms could go a long way toward providing suitable housing for families in Toronto.

Torontonians also have a hard time finding rental housing. With vacancy rates falling to 1.1% and 0.7% in the purpose-built and condo markets respectively – well below the 3% housing advocates consider a ‘healthy’ rental market – landlords can be highly selective with their tenants, which can open the door to housing discrimination. A tight rental market also means there’s greater potential for price increases when units turn over. Adding more missing middle housing to the rental sector could provide some relief to what is otherwise a highly constrained rental market in Toronto – either directly through the provision of rental housing, or indirectly by providing opportunities to households that currently rent to move into ownership housing.

I’m stating the obvious here, but ownership housing is extending beyond the reach of many households in Toronto. Between 2006 and 2016, the real median owner household income (2016 dollars) in Toronto grew by only 3% while our measure of house prices – the MLS® Home Price Index (Composite) – grew by approximately 38% over the same period. Because most middle-income earners can no longer afford to purchase housing on their own, many stay in the rental market. This has implications for those at the lower end of the housing spectrum because there is lower turnover of the rental stock, and thereby fewer units available for rental. Building more missing middle housing could provide a wider range of housing choices for households looking to move up or down the housing ladder, thereby freeing up more of the existing housing stock and helping to promote affordability.

The public, private, and non-profit sectors all have a role to play in addressing our shared housing challenges. Read What is the Missing Middle? to see how we can collectively begin to advance solutions to our missing middle challenges.

Julie Fader is a Program Coordinator at Evergreen where she works on a portfolio of city-building programs. She developed a passion for cities after two years in Tokyo, working at a tech start-up that helped travelers navigate and fully appreciate Japan’s urban areas. She can be reached at jfader@evergreen.ca