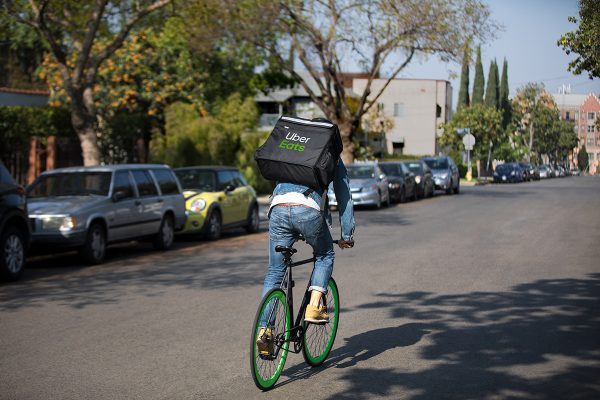 Part two of Nick’s look at the state of ride hailing. Read part one here.

It has been almost ten years since Uber was founded in San Francisco. In 2011, saw their first services and app launched, which was followed a year later by ride-hailing competitor Lyft. The bright future that every tech-happy urbanite had been longing for had arrived: you could book a taxi through your smartphone. Hallelujah. World saved.

Admittedly, Uber has been on its own journey to now talk more about the importance of transit, walking, and cycling. Both Uber and Lyft try to offer shared rides with limited success. They even tell you about transit in the app, if you’re in the right city. They’re venturing into bike share and food delivery. And advocating congestion pricing. All part of moves to become the main platforms through which people purchase their mobility. But the bulk of their business, however, remains private car trips and that’s what tI’d like to focus on.

While Lyft initially only unfurled its branding in North American cities, Uber’s tech bro-fuelled expansion has had a global reach, which has shaken-up cities as they seek to recast urban mobility in their uniquely-un-urban image: private car transport with as little human interaction as possible.

So prevalent and unexpected was the rise of Uber and Lyft that many governments had to invent new categories to regulate them: Transportation Network Companies or Private Transportation Companies.

Despite all the novelty — yes the app is smooth and easy, yes anyone with a car can pretty much start driving for them — the fundamentals still remain. It is a taxi service functioning in cities that haven’t changed shape all that much. But ride hailing in its current form three key ingredients. The first is the enormous amounts of cash investors have so far been willing to throw at the companies, the second is the companies’ abilities to defer risk onto the drivers, and the third is inability of cities to regulate the blurred space between incumbent taxis and new ride-hailing models. Let’s address the three in order.

First, finance. Both Lyft and Uber reported losses of over $1-billion dollars — each! — in the first quarter of 2019. Niether have yet to turn a profit, and may never do so, as Len Sherman points out in Forbes. Every major ride-hailing company around the world is losing money. Jarrett Walker, author of Human Transit, agrees, “If ride-hailing companies had the potential to be profitable … someone surely would have done it by now.” Private mega-wealth has, to date, underpinned the companies and transfers it into cheap(er) taxi rides. New public investors may have less patience.

Second, labour. If its precarious labour force is able to organize and perhaps win legal or political support, then the risk-free, flexible labour they rely upon may also be a thing of the past, pushing up prices or reducing the pool of casual drivers.

Lastly, cities may also lose patience. While some may introduce driver, licence, or vehicle caps to tackle congestion and competition, others will look to charge more or increase the barriers to licensing, putting downward pressure on the driver pool, forcing them to pay more. In Britain, Sadiq Khan is pushing for the powers to cap numbers (as Boris Johnson did before him) — a rare piece of consensus from mayor’s drawn from opposite ends of the political spectrum. Indeed, Sadiq Khan just brought ride-hailing into the congestion charging regime (yes, they were previously exempt). With cities declaring climate emergencies, battling declining transit ridership or obsessing over congestion, ride-hailing companies are in a tricky spot.

Without knowing for how long they might last, the ride-sharing model may be reaching its limits under the weight of these three pressures. They might not be around for long. But our cities and the needs of their people will. I’m highly sceptical of the claims made by ride-hailing firms about their positive impacts. They can be useful every once in a while, but there’s still too many of them buzzing around our streets for so few journeys. The reason car sharing schemes — like Car2Go, Zipcar, Enterprise, and Communauto — have a role to play is that they’re scarce and expensive enough to be used in moderation. Currently ride-hailing is not that (for those who can afford it). So, while Silicon Valley might foist a new way to use cars upon us, real city leaders should be looking for the best ways to get people out of them.