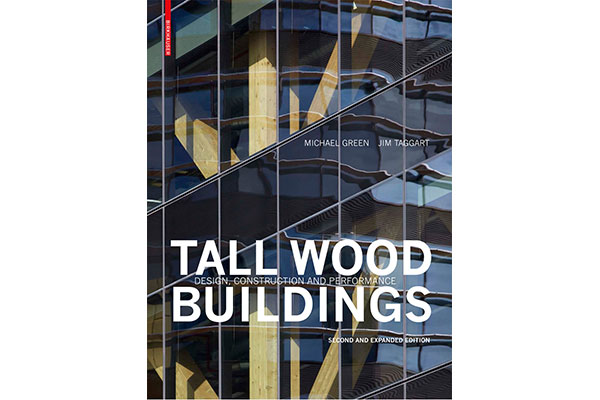 A fundamental change in the way in which we build our cities is imperative, re-learning how to build in timber and how to build tall with the new engineered timbers that the 21st century technologies allow will be fundamental to our future. This new age of architecture takes us beyond the notions of modernism and concrete construction to a new timber age. This book marks this new age and will help to provide the inspiration and momentum for the outstanding architecture to come.

In the history of architecture and construction, there has never been a building material that has had as rough a ride as wood.

This is not without reason. It has a limited record of use from ancient history simply because of its inability to withstand the ravages of time. Furthermore, its combustibility has out and out vilified it. By the end of the nineteenth century, cities all around the world had had their own devastating version of the Great Fire of London in 1666, in which 80% of that city’s building stock was lost. For this reason alone, building codes around the globe have not seen significant change in regards to the use of wood for some time. This is reflected in Canada where, since the 1950’s (and up until just recently), wood buildings have not been permitted to be built above four storeys.

Prior to the reformation of poor forestry management practices of the 1970’s, concrete and steel was touted in the construction industry as preferable to wood because of the issue of mass deforestation. Here in British Columbia, with images of clear-cutting practices still fresh in the minds of environmentalists, new urban construction has primarily been predominated by concrete and steel, relegating wood to the single family house construction sector. Perhaps not since Louis Kahn uttered his famous remark about what a brick wants to be, has there been a need to bring wood back into the mainstream conversation.

For as pointed out in this new edition of Tall Wood Buildings by architects Michael Green and Jim Taggart, just the advancement in the last four years alone around the science of fasteners, connections, and glues has become a game-changer, enabling wood to now compete with all the material strengths and efficiencies of concrete and steel, without any of the environmental fallout. At an urban scale, and as cities continue to grow in size and numbers around the world, the ramifications are understandably huge—certainly as renewable resources are being eyed by municipalities, with wood and mass timber technologies possibly able to be one of several needed solutions to mitigate climate change.

As such, the authors of this new book have provided an updated introduction and conclusion to the original 2017 edition, to discuss more recent achievements and breakthroughs in tall wood building science, including five new case studies added to the original book’s thirteen. And already it appears the book will require a third edition, to provide for how recent changes to municipal building codes will have been adopted by the development and construction industry. Following the recent change in our national building code which now permits 12-storey mass timber construction, the book’s authors point out that in the U.S. 18-storey mass timber construction has been permitted for some time now.

Just as recently as this week, Vancouver City Council heard a motion to allow for an increase of mass timber buildings from six storeys to twelve, as has been made possible by the aforementioned recent changes at the national level. As the trailblazer for the Metro Vancouver region, this move by Vancouver most certainly will prompt other municipalities in the region to follow suit, which in turn will have a huge ripple effect through the province’s construction industry.

Green and Taggart’s book then arrives at a poignant moment, as it can help the many building officials, fire marshals, and municipal planners to understand wood construction better, and that when used properly, it can effectively reduce the carbon footprint of a building, while offering the same level of fire and seismic protection as steel or concrete.

The book also provides an update to the current and upcoming tall wood projects that industry professionals, planners, and scientists have been following since 2004, when the European Union endorsed Eurocode 5: Design of Timber Structures. For this reason, many of the case studies featured in both editions of Tall Wood Buildings include examples of tall wood design from Sweden, Finland, Norway, Germany, Austria, Italy and the U.K. More recent examples in North America and Australia are also being watched closely, especially those that have had to contend with harsh local conditions, whether cold winter months in Canada or fire and termites in Australia.

Also apparent in the updates to this book is the fact that the prescriptive nature of building codes are the biggest hurdle to building taller in wood. By adopting objective-based building codes in the global marketplace, Green and Taggart believe the industry could be transformed when it comes to tall building construction. And with the many engineered wood products featured here in the materials chapter now accepted and available in the construction industry, the time is right to look at building taller.

Other highlights include an updated diagram in the book’s opening pages, placing all 18 buildings featured in the case study section in ascending order of height, graphically demonstrating their place in comparison to a 60-metre tall Douglas fir. Only the recently completed HoHo Wien in Austria and Mjostarnet in Norway are taller—effectively illustrating that there is still a long way to go before we see monuments like the Empire State Building constructed of wood. But this is precisely where the authors of the book think we can, and should, be going.

In Canada, with tall building design predicated by the need for fire tested and rated two-hour building assemblies—and while large wood EWPs (Engineered Wood Products) can withstand the two hours—it is the connections and glues that hold the products together that cause the failure. This is where tall-building science will require more rigour if we are to build structures beyond the tallest (85.4 metres) featured in the book.

The outcome of the featured case studies will also help to direct the future conversations about building our cities out of wood, a subject which both authors have had much experience in. For Michael Green, this book is a fitting companion to his Case for Tall Wood Buildings (2020), as well as a continuation of Jim Taggart’s own discourse on the subject in his Toward a Culture of Wood Architecture (2011).

With the updated introduction remarking on current trends in forestry science, the opening chapter provides much on the state of global forestry management, and how forest plantations are providing new and exciting opportunities for understanding the relationship between a building material’s life-cycle and its connection to the biosphere. And with transportation infrastructure starting to shift to renewable energy, one case study in the book demonstrates its ability to have a smaller carbon footprint with CLT panels fabricated off-site and transported from a neighbouring country than to construct the building of poured in place concrete.

Tall Wood Buildings also features three much lauded Canadian projects, including Brock Commons Tallwood House at UBC by Acton Ostry Architects, the new Earth Sciences Building also at UBC by Perkins + Will, along with Michael Green’s own and much celebrated Wood Innovation and Design Centre in Prince George. As such, the book is an important update to the discussion around tall wood design, advocating for its use in tall office and residential tower construction, and how the wood industry is now poised to be a panacea to our environmental woes, by providing a much needed earth friendly choice to the GHG-heavy conventional materials tall towers have traditionally been made of.

An indispensable resource on this timely topic, as Jim Taggart sees it:

“Beyond the prerequisite for third party certified sustainable forest management, it is new products and technologies, building science and fire engineering that really underpin the whole tall wood initiative. We see this book as adding momentum to the evidence based approach that will ultimately inspire market confidence and drive industry transformation.”